Knowing that My Fathering Matters

Chatting with Dr. Jeffrey Shears about Being a Dad and Research about Fathers 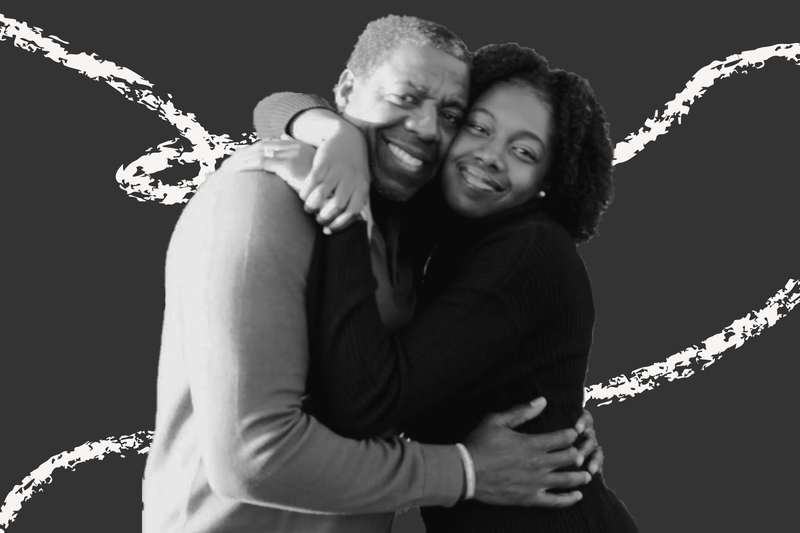 This is Dr. Jeffrey Shears with his youngest daughter, Jadah. "I have three daughters. It's been a super rewarding experience to nurture my girls and see them be successful in all their endeavors."

Welcome to the Better Life Lab, Mission: Visible series, “Getting the Story Right about Black Men and Care.”

Black men are caregivers, but too often they aren’t viewed as such or are excluded from broader conversations about care. As a result, family-supportive public policies, shaped in large part by cultural narratives, may not only fail to account for Black men's needs but can also make it harder for them to care for their loved ones.

Building on the report, "A Portrait of Caring Black Men," this limited blog series is a space for Black men to contribute to ongoing conversations about care that influence culture and policy. Contributors to the series share their personal stories, perspectives, and research about fatherhood and caregiving.

If you’ve got a story to share or a question related to Black men and caregiving that you would like us to explore, go ahead send us a message at betterlifelab@newamerica.org!

Dr. Jeffrey Shears is a joint appointed Professor of Social Work at the North Carolina Agricultural and Technical State University and The University of North Carolina, Greensboro. He is also the co-chair of the Moynihan Institute for Fatherhood Research and Policy. Dr. Shears has spent the greater part of the last twenty years writing about fatherhood. Of particular interest to him are the protective mechanisms and the intergenerational transmission of fathering. He wants to understand how fathers learn from preceding generations and how previous experiences impact fathering attitudes and behaviors.

When we sat down—virtually—to chat about Black fathers and the care they provide, Dr. Shears told me, “I could talk about this all day.” Our discussion ranged from personal experiences, to the evolving definition of fatherhood in research literature, and even the nuances of Daniel Patrick Monyihan’s controversial legacy.

Check out a few of the key takeaways from our conversation! (This conversation was edited for clarity.)

#1: Black fathers and their caregiving are impactful.

From his research and his own experience as a dad, Dr. Shears understands just how important Black fathers are. “I know what my impact is,” he says. For him, caring for his three daughters continues to be a rewarding experience. Looking back on his fathering, he reflects, “I’ve enjoyed every developmental step.”

“I have three daughters. It's been a super rewarding experience to nurture my girls, to see them be successful in all their endeavors, and to just be there for them. I've enjoyed every developmental step. I loved when they were toddlers — I could hear them running on the hardwood floor. I loved that stage. I loved the adolescent stage when it was, “Hey dad, what's up?” I love all those days.

When I talk to dads, I talk about ‘fathering on purpose’ — being intentional — and I really try to be a role model.... I guess the takeaway is...knowing that my fathering matters. I know that fathering is impactful not just to my daughters, but generationally."

- Dr. Shears on being a dad

#2: Twenty years ago, researchers did not include fathers in research about parenting, childhood development, or caregiving.

A social worker by training, Shears’ foray into research about fatherhood really took off when he was a graduate student at the University of Denver. In 1995 the Administration for Children and Families, housed in the U. S. Department of Health and Human Services, launched an extensive evaluation project to assess the effects of the Early Head Start program. The questions and data collection were all oriented around moms — the project design recruited 3001 expectant mothers but largely excluded fathers. In fact, it was not until two years later that the evaluation project included fathers and really began asking them about their caregiving. Shears acted as the director of the Denver site when the Early Head Start Father Study began.

When researchers asked fathers the right questions, Shears notes, Black fathers stood out from their peers. Indeed, recent literature has demonstrated that Black fathers either report doing a similar amount or more caregiving activities than their counterparts of other races.

The understanding that Black men were less involved was partly [informed] by how we measured fathering at the time. Historically, the caretaking, changing of diapers, getting up in the middle of the night, carrying the child to the doctor, potty training — we never asked fathers about those things...We looked at those things as mothering.

When we started asking fathers these questions about 20 years ago, Black dads stood out and reported doing more household labor, chores, child care activities, and things of that nature than [men] of other racial groups.”

- Dr. Shears on how research has excluded fathers in the past

#3: The definition of fatherhood has been changing.

As the study of fatherhood has evolved, our understanding of fathering has also changed to become more inclusive. Being an engaged father is no longer predicated on whether a father lives with his child, but more so on what the father does with and for his child. In the United States, almost a quarter of children under the age of 18 live in single parent households. While living apart from one’s family may change caregiving dynamics, it does not mean that caregiving ceases to exist.

- Dr. Shears thoughts on the changing definition of fathering

#4: To support fathers in their caregiving roles, and especially Black fathers, we need to understand how systemic racism can create barriers to care.

Systemic racism has erected barriers that have made it challenging for many Black fathers to give care. When it comes to promoting good fatherhood, Shears says, we need to have robust policies in place that address the racial inequity deeply embedded in economic, social support, and legal systems — all of which disproportionately disadvantage Black men and ultimately deny them the ability to actively fulfill their caregiving roles.

As Shears notes, barriers to caregiving are erected within, across, and at the intersection of systems. Look at work inequalities: Black men who are fathers with caregiving responsibilities must participate in a labor market that is more likely to segregate people of color into low-paying jobs and render them more susceptible to underemployment. Without equal and adequate access to good paying jobs, many Black men, more so than white men, have a more difficult time accumulating savings and disposable income, both of which play a major role in offsetting the costs associated with caregiving responsibilities. The racial disparities in income and wealth make caregiving even more difficult, specifically for Black fathers involved in the justice system.

Due to racist and discriminatory policies and practices (over policing, harsh mandatory sentencing laws, courtroom bias, high costs of legal representation, and more), Black men are grossly overrepresented in the justice system. As a result, a large number of Black fathers risk losing physical access to their children through incarceration. If a father had child support obligations prior to incarceration, he may encounter even more barriers to caregiving.

Black men simultaneously involved in the justice system and the child support system likely experience compounding barriers to caregiving. The costs associated with child support payments (which accumulate during a parent’s incarceration) can create financial barriers, which in addition to physical separation, make it even harder for any parent to engage in caregiving. In 2015, The Marshall Project reported that at the time, 2.2 million incarcerated individuals were parents and 20 percent of them had child support responsibilities.

An outstanding child support payment can lengthen sentences, increasing the amount of time parents spend away from their children. At times, simply an inability to pay child support can actually result in the incarceration of a parent. When they re-enter society, formerly incarcerated parents with outstanding payments take on child support debt, which can damage credit, lead to the garnishing of wages, and result in the suspension of one’s driver’s license. All of this together increases the financial insecurity of justice involved parents and creates another obstacle to re-engaging with children after incarceration.

Shears emphasizes that ultimately, policymakers need to enact legislation that takes a comprehensive approach to elevating families, is cognizant of the many overlapping layers of systemic inequity which impact Black caregiving men, and is accessible to the communities that need it most, because all children have fathers.

"Not having the money to pay child support is another barrier partly because there is this misconception that if you’re not paying child support or are behind in child support, you won’t be able to see your child. So, a father who is behind on payments may think, ‘Child support is looking for me.' He’s thinking, ‘Man, I didn’t pay my money, so I’m just going to try to hide from everybody.’ In reality, it’s child welfare services — a totally different system — that determines a father’s ability to access his child, not child support.”

- Dr. Shears' take on how confusion about how systems operate and an inability to afford child support payments can pose a barrier to careiving

#5: Future research must include the experiences of Black fathers.

Future research about Black fathers should seek to incorporate their perspectives and experiences, says Dr. Shears. For example, researchers should ask Black men, “What do they identify as good fathering?” Another question that should be asked is: “What is the intergenerational impact of fathering and how do Black men see themselves as fathers?” Finally, researchers should investigate the question, “How can we look at Black fathers as a resource to families and their communities?”

"Black men are a totality of things, but we do not see them in their totality. Do we really value Black men? Like, nah — you can’t value someone as a father, but not value him as a person or see him as a resource to society, his family, or his community. It’s very difficult for me to separate the two, [being a Black man and being a Black father]. When I became a father, I was a Black man. I know how the world sees me...and I carry that into my fathering.”

Research about fatherhood has come a long way.

Twenty years ago, researchers finally began to intentionally include fathers in studies about caregiving and childhood development. With time, definitions and ideas about fathering also began to change. For example, today there is a growing understanding that a father's engagement is determined by if and how he cares for his child, rather than his place of residence. While research about fathers has demonstrated that Black men are engaged in the lives of their children just as much — if not more than — their peers, the reality is that many Black fathers, especially those who are economically disadvantaged, may encounter a number of barriers to caregiving.

Systems and institutions in the United States have historically devalued the lives, contributions, and wellbeing of Black fathers and continue to do so today. The criminalization, over policing, and killing of Black men at the hands of law enforcement, as well the overrepresentation of Black men in the justice system, are clear demonstrations of this. In order to value Black fathers and support them as caregivers, society must value Black men, disrupting false narratives that mischaracterize who they are and working to dismantle the overlapping structures of systemic racism that ultimately rob them of their right to care.