Gig Workers Are on Their Own

Why Some Workers and Experts Agree Worker Power is the Answer 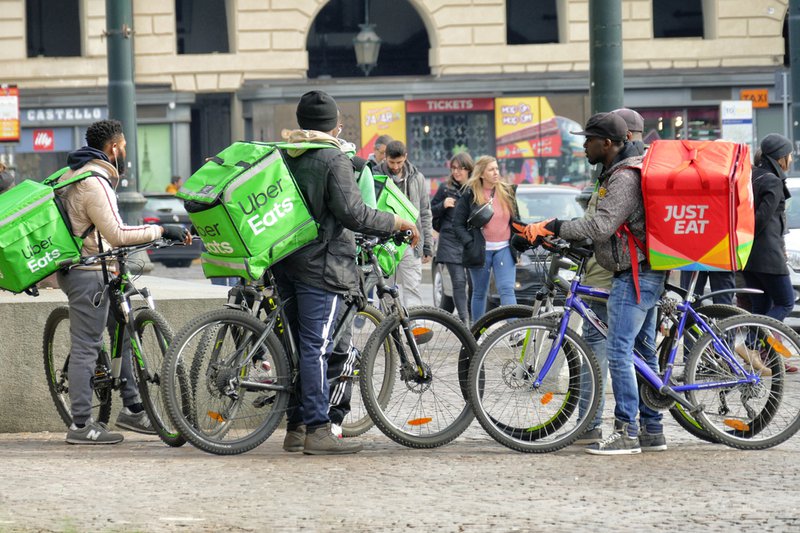 When Cherri Murphy needed to find a job in 2017 in the San Francisco Bay area, with a flexible enough schedule to enable her to pursue a doctorate in public theology, she thought she’d found the perfect solution: she became a rideshare driver.

At first, the gigging solution worked for her. “At the beginning, you think, ‘This is gravy,’” she said. “Everything’s working in your favor. It’s like the first time dating, or the honeymoon. You think, ‘This is IT. This is the ONE.’”

But over time, as platform algorithms changed in mysterious ways, as she realized she wasn’t protected should she have an accident, or, when she was sick, she found herself having to choose between working while ill, or staying home to recover and losing out on pay, she began to feel trapped.

She was working longer and longer hours for less and less pay, she said. The stress and uncertainty of how much she’d make, the risks she alone was shouldering, like car maintenance and repair, insurance, gas, and just sitting for hours on end began to take a toll on her health.

“I gained tons of weight. My body atrophied significantly. My health deteriorated significantly,” she said. Driving in the heavy smoke from California wildfires left her with asthma. “And just the stress — making sure rent gets paid,” she added. “It’s a system designed for distress. It produces disparities.”

And that was before the COVID-19 pandemic that, in the  months prior to the introduction of vaccines, made sharing a closed space with a stranger a potential matter of life and death.

Quan Mai, a professor of sociology at Rutgers who studies gig work, has found that the precarity and uncertainty of gig work can lead to so much anxiety that it keeps gig workers up at night. Mai’s research, in fact, inspired the title of this week’s Better Life Lab podcast episode on work stress and the future of work and wellbeing, “Sleepless in the Gig Economy.”

As many as 55 million people in the United States were gig workers —or 34 percent of the workforce — in 2017, according to the International Labor Organization, and the total is only projected to rise. That makes addressing what isn’t working about gig work paramount, when we think about how to create a better future of work and wellbeing.

“Non-standard employment like gig work can affect workers’ sense of economic security in a massive way,” Mai said. “Think of the cornerstones of the American dream – a house, a car. You need to get a mortgage, a car loan. But the way the systems are set up are based on the assumptions of the past: you have to have a stable income that you can prove comes in every month. Without that, workers have a hard time getting a mortgage or car loan. You’re unable to predictably plan for the future. It makes living situations more precarious.”

And when health care and other benefits are attached to an employer, as they are in the United States, and you’re an independent contractor, a freelancer or a gig worker, you’re really on your own. Beyond financial and health impacts, “precarious work can lead to social marginalization, reduced opportunities for meaningful workplace participation, can undermine ties to others, reduce interpersonal trust and lead to feelings of powerlessness,” Mai said.“It’s unsustainable.”

The explosion in gig work — driven by advances in technology, workers’ desire for flexible work and consumers’ hunger for low-cost convenience — is another marker that the once stable “social contract” between workers, businesses and the government has broken down.

The modern social contract emerged along with the advent of the New Deal. More jobs in the United States became good jobs. Employers were expected to guarantee workers a measure of security — a fair wage, a reasonable number of hours of work, the ability to organize and access benefits like retirement savings and health insurance. All of that began to change in the 1970s, with globalization, rapid technological change, market-driven neoliberal policies and corporate leadership that began to prize short-term shareholders and profit over long-term investment in worker wellbeing and human capital.

That has led to a rise in “non-standard” work arrangements — independent contractors, gig workers and the like. Many of these workers are people of color. And, far from enjoying golden years of retirement, one in five of these contingent workers is 55 and older—ike the 70-something Uber driver who picked me up one day so she could afford her heart medication.

Platforms like Uber, Lyft, DoorDash, Instacart and others argue that the arrangements give workers maximum flexibility and freedom. n reality, the arrangements give owners flexibility to keep labor costs low. Workers may have flexible schedules —which may work for highly-paid, high skill gig workers in creative industries— but that comes at a steep price for most gig workers: low and unpredictable wages and hours and paltry benefits, if any.

Some researchers call this new class of insecure workers “The Precariat.” And, not surprisingly, precarious work not only fuels inequality and power imbalance, it’s also enormously stressful. It’s hard to sleep when you don’t know when you’ll get your next gig or how much you’ll be paid for it or whether it’ll be enough to feed your family or pay for your medication. One study of gig workers found that the more employment insecurity they experienced during the day, the more their nights became fitful, sleepless and anxiety-ridden.

Is there a path forward? Some argue that gig workers should be made employees of platform companies. Others, that we should develop robust public and portable benefits like healthcare, retirement savings and paid leave that can support and follow workers from gig to gig.

Cherri Murphy is now an organizer for Gig Workers Rising in the Bay area, trying to solve some of the problems with precarity she experienced as a rideshare driver. I asked her, how do we change? How can we make the future better?

Her answer was clear: worker power.

“Financial instability is one of the greatest challenges facing these types of workers – having them work 50, 60, 70 hours a week and still can’t make ends meet, living in their cars, can't afford family leave or health coverage. Just driving around without even a restroom,” she said. “We need federal legislation that will enable us to have a union. I believe it's the single greatest protection we can have against overworking ourselves to death. Building a union would allow us to negotiate fair wages and, finally, just give us enough money to support our families and work in safe environments.”

We’ve got work to do.