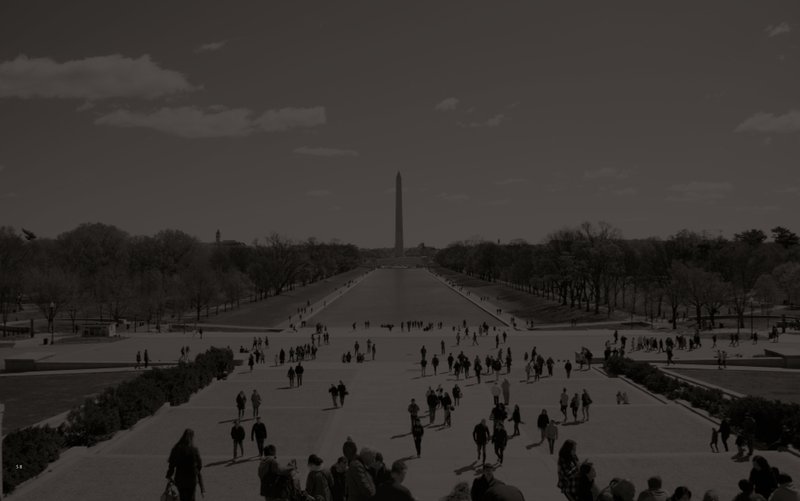 Letter from the CEO

When I stand on the sidewalk in front of New America’s offices on 15th and H in Washington, D.C., just a block from the Treasury Department, I look up at the 1907 granite building and admire the cornices and columns, the solidity and gravitas of a building meant to last for centuries. When I come out of the elevator on the 9th floor, I similarly look down at the colorful old floor tiles, up at the pressed tin ceiling, and across to the old brick wall in our conference room. But I also take pleasure in a completely renovated space, one that looks more like a start-up than a traditional Washington think tank, as open and cool and collaborative as we could make it.

This is new America growing out of old America. Indeed, the offices on the 8th floor have the Corinthian capitals of the building’s exterior decorative columns outside their windows like sculpture. And on the 10th floor we are treated to a wrap-around terrace, which was added in an earlier renovation of the building. Old and new together, ripping out what is ugly or no longer serves, but keeping the foundation and frame, while renewing old spaces to adapt them to present needs.

This same renewal is happening in the downtowns of so many American towns: old movie theaters turned into co-working spaces, old banks turned into restaurants, old factories into tech incubators. The developers, architects, and builders preserve brick and stone walls, wood banisters and masonry moldings, lacy iron railings and stained glass chandeliers. They replace what has not stood the test of time. And as New America’s founding board chair and continuing board member James Fallows and his wife Deborah documented in their 2018 best-selling book Our Towns: A 100,000-Mile Journey into the Heart of America, towns and cities are coming together to reinvent themselves economically and socially as well.

Renewal can also mean a new commitment to old ideals.

New America was founded in 1999 as the New America Foundation, an organization dedicated to bold and visionary thinking from the “radical center” in an age of transformative technological change. But renewal was part of our DNA from the beginning. As two of our co-founders, Ted Halstead and Michael Lind, wrote in 2001, “America will be reinvented again,” driven by the forces of “technological and economic progress, along with demographic change.”

In 2017 we adopted a new mission statement committing ourselves to American renewal by continuing the question to realize our nation’s highest ideals in an age of rapid technological and social change. A grand vision! But not an abstract one. We also adopted six broad goals that aggregate and distill the work of our many programs and initiatives and define our vision of what a renewed America can look like.

In 2018, as this report illustrates, we continued conducting and publishing world-class research and writing, in books, blogs, reports, articles, op-eds, films, and even virtual reality. We are knitting together a big vision of what this country could look like, a vision of sweeping reform of our democracy: an educational system from cradle to career, our lives better at work and at home, access to and protection from technology, an economic and social foundation, and our national and resource security informed by accurate data.

We also saw the beginnings of the University Network for Public Interest Technology to grow the pipeline of computer scientists, engineers, designers, data scientists, ethicists, and others who want to spend all or part of their careers developing, applying, or regulating technology in the public interest. We announced the network in January 2019 with the Ford and Hewlett Foundations: it includes vitally important national universities such as Stanford, Harvard, MIT, Carnegie Mellon, CUNY, Florida International University, Howard, Miami-Dade Community College, and Arizona State University.

Another example of our doing is building: building networks and coalitions, like the Partnership to Advance Youth Apprenticeship (PAYA), a multi-year, collaborative, national initiative that will support the success of efforts in states and cities to expand access to high-quality apprenticeship opportunities for high school-age youth. Still another is bringing business, education, union, civic, and public leaders together in Indianapolis, Phoenix, and Detroit to talk about—and, more importantly, plan for—the future of work in their towns, based on tailored research predicting the likely impact of automation and AI on their economies. Yet another is building out a civic architecture in Chicago, serving as a connector and community concierge in ever wider circles radiating outward from Indianapolis, and supporting social entrepreneurs in California.

Turn the page to find out more on all these initiatives. And join us this year as we celebrate our 20th anniversary with as many of you and in as many ways as possible. Welcome and meet Tyra Mariani, formerly our Executive Vice President, as she now takes the reins as President and COO, working closely with me every day. Take your place alongside us in our ever-growing community of partners, collaborators, and fellow-travelers on the journey of American renewal, at home and in the world. We have never needed it more.

Letter from the Board Chair

A year ago, I wrote this note worried this country was entering a new Gilded Age, but confident that New America could be a part of a new Progressive Era, and play a role in a passion of mine, progressive federalism. We were poised to help further a vision of a renewed America, one where ideas emanated from places outside of Washington, D.C., where those ideas were forged and shared by a network of thinkers and doers. I was humbled and excited to be the new Chair of the Board.

As I look back on the past year, New America has taken concrete steps to surface, share, and support innovation and experimentation happening in communities across the country. We have brought together communities to discuss the future of work. We have helped journalists across the country interrogate policy innovation, and we have done the hard research work to advise leaders on what policy ideas are most effective to address our country’s most pressing challenges.

And, personally, much has changed. As I write this, I am preparing to step aside as Chair for a year to join as Chief Economic and Business Advisor in Gov. Gavin Newsom’s new administration in California, giving me a chance to pursue my passion for progressive federalism, and be a part of bringing civic innovation to a state I love. It also happens to be the fifth-largest economy in the world, making it a great place to test and scale big ideas.

Twenty years ago, the founders of New America were also worried about the country, but confident that they could find bold, bright ideas from all points on the political spectrum—they called it the “radical center”—and that these ideas would lead to a change in our politics and policy.

In the past two decades, New America has also evolved. Of course, many of the core principles underpinning the concept of the radical center have moved from big, bold ideas to a part of our political discourse. Dozens of other ideas incubated here—including the individual mandate, child savings accounts, and a database of domestic terrorism—have influenced the public discourse and had tremendous impact on the lives of citizens across the country, leading to the kind of equitable society we envision in our mission statement.

But, we have broadened and deepened our impact. We now act as convenor, bringing together civic leaders to forecast how technology will affect a community’s job growth and need for certain skills. We brought together a coalition of 17 local governments, universities, and nonprofits that meet monthly to share how they use data to combat the growing opioid crisis facing communities across the country. Our fellows are connecting citizens to social services and working to provide education for homeless children in California.

Having been a part of this journey at New America since I joined the board in 2004, I watch with pride as this organization grows and evolves to meet the challenges of the moment. From a group of groundbreaking fellows writing books full of big, bold ideas to a collection of scholars and programs that are working to connect those ideas to policy practice. From a radical center to progressive federalism. From a small office to a robust, well-managed, financially sound organization having an impact and changing lives.

For the next 20 years, we are poised to take the next step to extend that model across the country, to surface, share and scale those ideas by connecting civic leaders in communities with the ideas that can change lives. I’m proud to be part of the latest era of a renewing America.