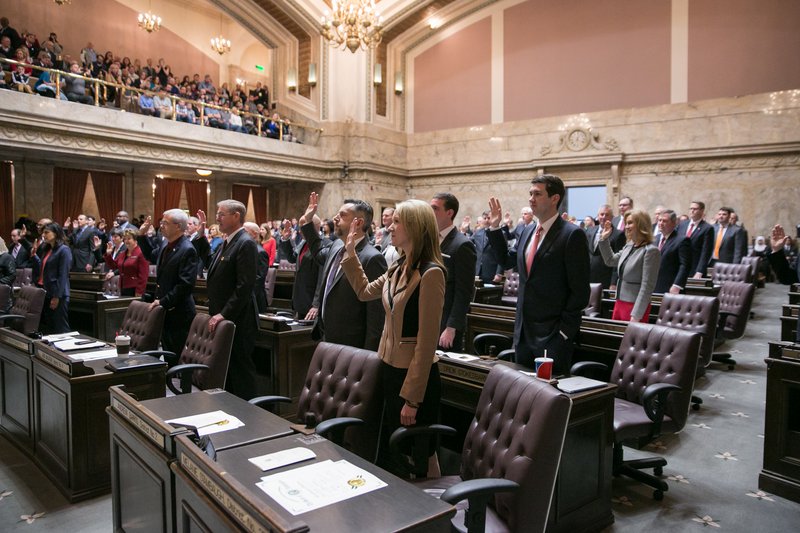 I witnessed, by chance, the swearing in of the first set of senior staff for the Trump administration. I sat in awe as I witnessed something I hadn’t seen in a long time, having spent the last several years working for the Obama administration: a sea of white faces being sworn in—white, male faces, to be exact. I shouldn’t have been surprised, but there I was—surprised. Surprised that America was not reflected in the first round of political appointees to assume the White House under this administration. Surprised that the platform on which Donald Trump ran—making America great again—did not reflect that America that he now serves.

Yet that trend continues. From senior staffers to cabinet picks, the lack of meaningful diversity runs through, and runs deep. Sure, there’s a token here and there, or they sit people of color in the background during the press spray when Trump is making passing remarks about Black History Month, but none of that represents meaningful diversity.

Does it matter? Of course.

Time and time again, from corporations to government and other civic entities, we see missteps by leaders and organizations because they fail to consider how people of various backgrounds might view their message or be affected by a given policy. They’ve either offended particular groups by their insensitivity, missed a market opportunity due to their lack of awareness of cultural needs and relevance, or seen policies producing unintended negative consequences for the very groups they were trying to help.

For example, Cadbury once did an ad comparing Bliss chocolate to international super model Naomi Campbell, who is an African American. Dove once showed an ad with the tagline “visibly more beautiful skin,” in which an African-American model was standing next to and suggested to be the “before” example of skin and a white model was shown under the “after” picture of skin. In the policy arena, the “war on drugs” was really a war on poor people and minorities because of the disproportionate impact it had on those groups. Transportation policies have had an outsized effect of limiting access to social and economic opportunities and direct costs for poor and minority people. And many people of color and educators know that zero-tolerance discipline policies have had a disproportionate impact on minorities—feeding the school-to-prison pipeline.

As Leah Daughtry recently put it, personnel is policy. Policy will be shaped by who gets to lead our government at the local, state, and federal level, and what they do and don’t know and who they choose to put on their teams will have an impact on each of our lives. According to a 2016 PRRI study, among white Americans, 91 percent of people comprising their social networks are also white, while only 5 percent are identified as some other race. So when it comes to building teams and leveraging one’s social network, short of a very intentional and time-intensive effort to seek and recruit a diverse team, chances are high that any given team will reflect the demographics of its leader.

Though minor in the grand scheme of the current political climate, we saw Trump speak rather unintelligently about Frederick Douglass. He described Douglass as “an example of somebody who’s done an amazing job and is getting recognized more and more, I notice.” Many were dumbfounded by this comment. Perhaps, and only perhaps, if he had the right personnel made up in part of people of color, Trump could have used it as an opportunity to inform the public about who Frederick Douglass was—a great orator, writer, abolitionist, and statesman of the 19th century. He could have done a lot more on the topic of black history, but as a starting point, he could have spoken more intelligently about Frederick Douglass. But this is also assuming he even cared.

Much deeper than helping a president connect with the communities he’s engaging with is the opportunity to influence and carry out policies that affect millions of Americans and to recognize the diversity of our people in the policies that get put forward. We often make the mistake of thinking because we’ve read about a certain issue or engaged with a particular people that we “get it” and can speak for something or about someone ad nauseum, or that we somehow know enough that we don’t need their perspectives in the room. Men cannot speak for women. Young adults can’t speak for seniors. Childless women cannot speak for mothers. White people can’t speak for black people. Each of these groups can be an ally, especially as it’s impossible to always have every possible diversity attribute represented, but it is necessary and not sufficient.

Depending on the topic and what’s at stake, we need to ensure the right voices are heard and included at the table.

I spent well over a decade of my career working on public education from multiple vantage points. I went to Catholic schools from kindergarten to 12th grade, so I really didn’t understand the issues in public education until I started to read about them. I got smarter about the challenges and opportunities when I started working for a school district. I got even smarter when I spent time in schools observing and listening to educators. My learning curve climbed every year since. So while I believe I can intelligently represent the interests of educators, my understanding alone is insufficient. I continue to need their voices and perspectives. The work and world is ever changing, and it’s nuanced such that I shouldn’t ever expect to understand all the nuances.

Likewise, I wonder if Betsy DeVos has a teacher working closely on her communications team. She recently tweeted, after her first day of work as secretary of education, “... now, where can I find a pencil. :)” That tweet created a strong backlash, particularly from teachers, for her lack of understanding about the challenges of teaching, including how teachers frequently have to buy their own supplies because the school budget does not provide for everything they and their students need. I suspect that if DeVos had a teacher on staff who understood these complexities, she may not have made that blunder. Maybe.

There was a recent film released named Hidden Figures that’s received much acclaim about African-American women’s contributions to NASA during the civil rights era. While it would be easy to cite the more notable government figures who made a strong impact on our society, like Patricia Roberts Harris, Antonio Villaraigosa, John Lewis, Shirley Chisolm, Sonya Sotomayor, and Eric Holder, the reality is that there are more hidden figures of diverse backgrounds who have helped advance the progress of our country and government as we know it than will ever be captured.

In a country where we’re experiencing deep divides in where we are and how to move forward, if we want to continue to be a global leader, make the United States a land of opportunity for all, and help those who want a better life for themselves and their families, we’ll need our government to reflect the diversity of its people.