Here’s Why 'Feminizing' the Opposition Is So Dangerous 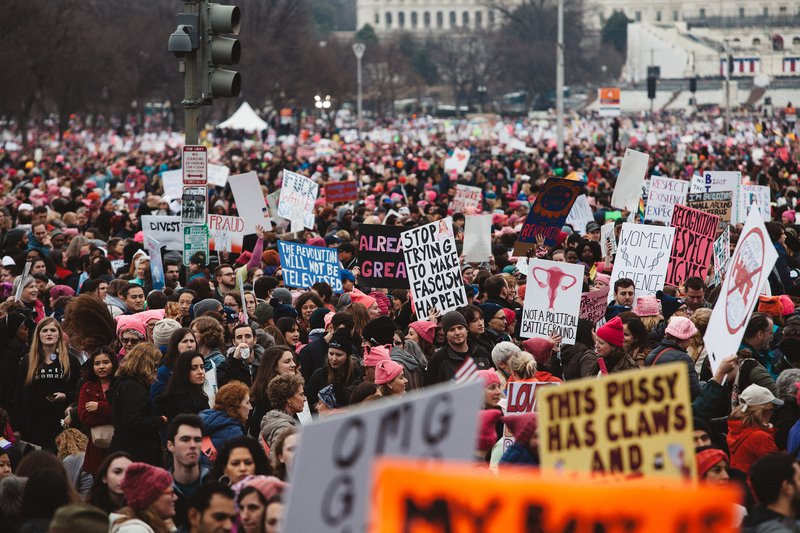 With alt-right leader Steve Bannon in the White House, there’s no question that the alt-right ideology is embedded in the current administration’s approach to wielding power, and that it’s already using coded misogyny to communicate to its base, discredit its opposition, and perpetuate destructive notions about gender, race, and other forms of identity. (Now-disgraced talking head of the alt-right movement, Milo Yiannopoulos, has in the past drawn a comparison between feminism and cancer.)

The Trump administration and its supporters identify with normatively masculine traits: controlled, rational, strong, protecting. By contrast, many of those who oppose the government are framed as normatively feminine: erratic, out of control, overly emotional, reactive, weak, needy, demanding too much. This loaded language is common in President Donald Trump’s tweets and in the posts of his most adamant followers, as well as in media outlets like Breitbart News, Fox News, Infowars, and RT. It’s woven into questions that appear in these publications that sound like: Why would the opposition “over react” to Trump’s policies by marching on the street if they weren’t overly emotional? Why can’t they “calm down” and just let the men do their job?

Why does this matter? Because it’s dangerous.

When the opposition to Trump is feminized, Trump’s supporters are encouraged to assume that those who disagree with their views must be treated with the respect and autonomy men are expected to afford to women in a patriarchal system (in other words: very little). The feminized opposition requires, in this mindset, discipline, oversight, control, and protection. Women are expected to be silenced, controlled, and dismissed. The interruption and silencing of Elizabeth Warren by Mitch McConnell during Jeff Sessions’ nomination for Attorney General illustrated this point. This mentality also extends to the opposition itself, its objections and protests, and anyone deemed a threat (“bad dudes”). It’s a trope that is at the core of a global patriarchal system that represses some people so that others can maintain their power.

This is the dynamic that created fertile ground for Trump’s practice of gaslighting, which Lauren Duca brilliantly pointed out, and a concept with roots in a film about a husband slowly manipulating his wife’s grip on reality. In a similar vein, convincing Americans to “call their reality into question” is easier to do when you’ve painted those who don’t agree with the  government as irrational to begin with.

We see this in how when Trump approves of someone, he calls them strong. Those who oppose him are weak. Trump’s own office is expected to conform to rigidly traditional gender roles. In light of the Muslim Ban, for instance, Brietbart published: “Advocates of sane, secure immigration policy have long noted that it’s almost impossible to have a reasonable discussion of the refugee and immigration issues, because it’s been sentimentalized and politicized beyond the realm of rational thought,” loaded words that tacitly nod to the sort of behavior Trump supporters should aspire to or avoid. (What could possibly be more familiar to those who occupy feminized roles in our society than being shut down or repressed because they are hysterical?) By contrast, Breitbart points to the Washington Post as a “dossier of hysteria” and then writes that “clear-eyed adults prefer to examine plain facts.”

Mapping gender norms against American political ideologies has precedent. Nearly 15 years ago, George Lakoff wrote that his research found “political worldviews can be understood as opposing models of an ideal family,” where conservatives hold that “the world is a dangerous and difficult place” and “one must be morally strong and disciplined.” This is juxtaposed with liberals who hold a “nurturant parent family” view, which focuses on empathy, responsibility and social connectedness. Today, we have a similar paradigm, with gender lines much more sharply drawn due to influences like the alt-right ideology.

Gender is both an identity and a way to understand the power dynamics that guide and enforce marginalization: In the patriarchal global system, those who conform to a specific gender identity (male) have access to more power, resources, and rights than those who don’t. The same pattern follows for other identities that we hold: race, religion, class, and ability, to name a few. Regressive gender roles, like those championed by the alt-right, perpetuate a hierarchy where men can access power and women can’t. This marginalization is compounded when gender identity intersects with other identities like race.

We now have a government whose blatant disregard for the rights of women, Muslims, Jews, differently abled, people of color, immigrants (and the list goes on) is public, documented, and explicitly condoned. When the opposition is angry, emotional, and reactive in response to policies aimed at rolling back their rights, that is a normal human response. Increasingly, it’s also a political statement that subverts the regressive notion held by the leadership that those who hold feminized roles (which includes but is not limited to women in this frame) should sit down and shut up. When a diverse group of women is at the helm of the opposition, and thousands of women, men, and gender nonconforming people are striking, marching, and voicing protest, it is an act of rejection of the administration’s destructive ideology and disposal of a binary masculine and feminine that is both toxic and repressive.

The administration’s opposition, as it continues to call for a better, more feminist, and more intersectional future (brilliantly outlined in the platform of the Women’s March) can offer real, transformative change in this regard.