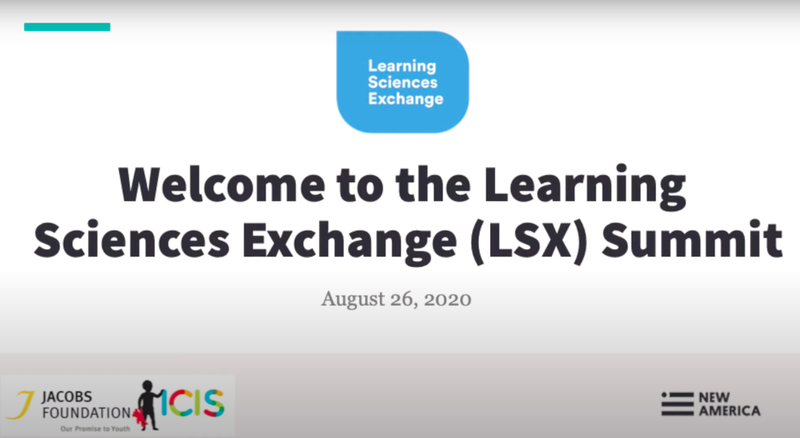 Helping parents, caregivers, and early educators gain access to groundbreaking developments in early learning research has the potential to transform how children learn in the early years and beyond. It was clearer than ever at New America’s Learning Sciences Exchange Summit on August 26 that it takes a special kind of communicative approach to ensure that scientific messages resonate with the public.

After two years of cross-collaboration, the inaugural class of 12 Learning Sciences Exchange fellows, spanning two continents and four disciplines—early learning research, journalism, entertainment, and policy—presented their culminating projects via a webinar hosted by New America in conjunction with the Jacobs Foundation and Kathy Hirsh-Pasek of Temple University and Roberta Golinkoff of the University of Delaware.

"How much we invest in our children is a measure of our future national security, our prosperity, and our morality. Nothing is more important for equity going forward than giving all of our children an equal shot,” said Slaughter.

A panel discussion moderated by NPR Education reporter Anya Kamenetz situated the LSX fellowship within the need for greater efforts of inclusion and outreach in science communication.

Research-based advice may not reach some audiences whom it is intended to assist, said panelist Ralph Smith, Managing Director of the Campaign for Grade-Level Reading, because of the deep chasm between families’ and caregivers’ lived experiences and the research being presented to them. “This is an audience about whom research has been done to them and very rarely from their perspective, for them,” Smith explained. “Data has been used as a weapon and not often as a tool for them.”

The expectation that caregivers will immediately act on information that researchers feel is ‘trusted’ is a harmful fallacy that ends up overwhelming parents experiencing an information overload of early education advice. Panelist Joan Lombardi, Director of Early Opportunities, emphasized that what parents really need are simplified, no-nonsense messages that appeal to their common sense.

Representing the entertainment industry on the panel, Madeline Di Nonno, Chief Executive Officer of the Geena Davis Institute on Gender in Media, pointed out that it is much easier to embed a stronger social mission in entertainment by appealing to the industry’s business imperative. Many entertainment leaders, she explained, were unaware of the unconscious bias present in their media products.

With the principles of accessibility in mind, the first group of fellows presented their public service announcement, which centered infant reading-comprehension research in a depiction of two grandfathers vying for their granddaughter’s attention with their dramatic, and sometimes ridiculous, book readings. Their antics are interrupted by the arrival of the baby’s parents, who tell the two oblivious grandfathers that greater engagement when reading to babies is all about emphasizing character names.

While developing their project, the fellows remarked that it became increasingly evident that storytelling could be a vehicle of expression and social change and was, therefore, an obvious method to hone in on with their PSA. It also became clear that the only way the public service announcement would be able to grab caregivers’ attention was by infusing information with humor, which they made a key accessory to their project.

The second group of fellows utilized storytelling in a more literal way through their “Bunny to Bunny” book series, which they hope parents will use as a bonding moment and a reference tool for high-quality interactions with their baby. The prototype for the series is colorfully illustrated with tips or “carrots” in the back section of the book where parents can find information about the beneficial interactions the book is promoting between caregiver and child.

Throughout the process of developing and writing the book, the group of fellows were guided by a key principle: Empower the parent and you’ll inspire the child.

Building off of findings that state rich conversations in early childhood can have an impact on the rest of a child’s life, the third group of fellows developed a public service announcement that sought to promote equity through language development. Grounded by stunning animations and delivered through the voice of a young child, the announcement states that parents ultimately can do one very simple thing in order for their child’s brain to grow and develop—talk with them.

The decision to have a child narrator voice-over the PSA was an intentional one, according to the fellows. For parents bombarded by messages everyday about how to raise their infant and promote learning, a departure from the typical adult narrative was a positive one. As an added bonus, the announcement has the potential to reach an international audience by switching out the English voice-over for another language while the animations remain consistent and easily comprehensible.

All three groups are hoping to bring their messages and prototypes to larger audiences by finding funders, publishers, and broadcasters to help them scale-up or continue their work.

To round out the event, the earlier panel members and other introductory speakers engaged in an open discussion about the groundbreaking ways in which the fellows’ projects communicate critical research while also reflecting on how to make solutions accessible in a more inclusive, asset-based manner. For the panelists, this meant turning the question of ‘what can I, as an expert, bring to the table?’ on its head, to instead ask what communities can bring in as experts and partners.