Want to See What Protests Can Be? Look at What They Have Been. 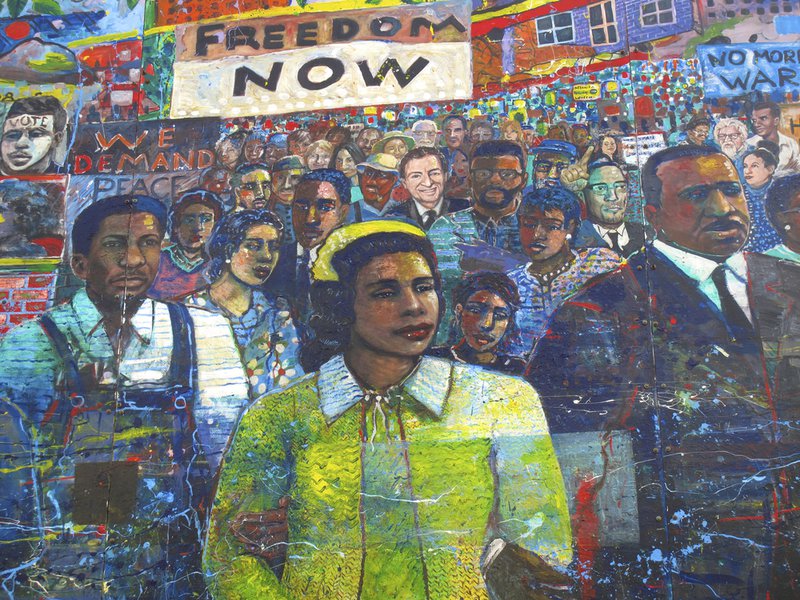 The most successful protest movements in history have been the ones that have set their own agendas. Whether abolitionists, woman suffrage advocates, or civil rights activists, progressive change movements have gained influence by disrupting politics as usual—not by slavishly aligning themselves with electoral parties.

However, electoral politics—in particular, the Democrats’ desire to win the next round of elections—is distorting conversations about the significance of the protests that have unfolded since the election of Donald Trump. Numerous  commentators—including Nate Silver, Senator Richard Blumenthal, “Democratic strategists,” and assorted columnists—have weighed in on the protests with only one line of questioning in mind: Are they good for the Democrats? Does the nearly non-stop activism portend electoral wins for the Democratic Party, in much the same way that the Tea Party movement of 2009 produced electoral gains for Republicans?

The surge of activism may well create a favorable environment for the opposition party. But it is wrong to analyze the protests solely in terms of the zero-sum dynamics of partisan politics. That narrow focus only obscures a broader point: The protests are an indictment of both political parties and a call to protect and preserve a threatened democracy.

Comparisons to the Tea Party also are of limited utility. Current protesters need not mimic the goals and tactics of the Tea Party, as observers fixated on electoral dividends of activism have recommended. Initially a product of populist anger, the Tea Party evolved into a “grass-tops” endeavor funded by Washington lobbyists and think tanks and aligned with the Republican Party.

No one should consider it a model grassroots change movement.

Rather, to see what protests can be, we ought to look back at what they have been—and what we will discover is an appreciation of the deeper roots of recent efforts.

Current demonstrations are a part of a wave of activism that stretches back to the anti-World Trade Organization protests of the 1990s and includes the battle for a $15-an-hour minimum wage, Occupy Wall Street, Black Lives Matter, and grassroots anger over Big Bank bailouts that gave rise to the early Tea Party movement. Like these predecessors, the current wave of activism bespeaks many Americans’ sense that electoral politics—and the political process and policies that result from it—are ineffective, and in some instances, rotten to the core. Political action committees influence elections. And too often, lobbyists for Big Banks, Agri-Business, Big Pharma, and the Chamber of Commerce, among other wealthy and powerful organizations and individuals, disproportionately influence which issues Congress prioritizes, as well as the content of federal laws.

Because the protests are a byproduct of the popular disdain for politics as we know it, it is perverse to view the new waves of activism only in terms of what they mean for the two major political parties. For many of those who have turned to the streets to protest, the major parties are a part of the problem—not the solution to what ails society.

Instead of only asking if the protests are good for Democrats and bad for Republicans, we ought to consider how the people’s power can be harnessed to prioritize Main Street over Wall Street interests and to improve the overall health and functioning of American democracy.

If current activists want to pursue these goals, they should not look to the co-opted, grass-tops version of the Tea Party as a model of how to move forward. The twentieth-century civil rights and women’s rights movements and the nineteenth-century abolitionist and woman suffrage movements provide more useful archetypes. During each of these movements, activists organized for change—in society and culture, as well as in law and public policy—while deliberately avoiding domination by the two parties. They did collaborate with particular political figures—think Martin Luther King Jr. and Lyndon B. Johnson—but only when doing so suited the movements.

Take the civil rights movement—a model grassroots campaign for social change—as an example. Following events that catalyzed a mass movement for racial justice (such as the mistreatment of black World War II veterans and the murder of 14-year-old Emmett Till in 1955), participants in the black freedom struggle organized, specialized, and defined goals. The major civil rights organizations (the NAACP, the Southern Christian Leadership Conference (SCLC), the Student Non-Violent Coordinating Committee (SNCC), the Urban League, and the Congress of Racial Equality (CORE)) all united around the goal of ending Jim Crow.

At the same time, these organizations pursued goals and used tactics appropriate to their individual missions. Dr. King’s SCLC set its sights on policy and legal change; by dramatizing injustice through non-violent civil disobedience, it successfully sought civil rights and voting rights legislation. SNCC, a student-led group, staged sit-ins and boycotts to protest discrimination and engaged in community organizing to uplift and empower oppressed local people. During the mid-1960s some SNCC veterans (such as John Lewis and Julian Bond) transitioned from “protest to politics.” Instead of relying on reluctant elected officials to represent black and poor communities, student movement veterans became public officials themselves. The Urban League focused on jobs. And the NAACP Legal Defense Fund, under the leadership of Thurgood Marshall, filed lawsuits in pursuit of equal opportunity in politics, education, and employment.

The late twentieth-century struggle for women’s liberation also included a variety of organizations focused on different objectives, none defined by a political party. As an initial step toward collective action, some women’s groups focused on raising consciousness; they educated women about how readily-accepted gender norms and stereotypes perpetuated oppression of women. Other groups, such as the National Organization for Women, embraced a strategy focused on legislative and legal change. In the thick of its campaign for the Equal Rights Amendment to the Constitution, NOW courted the support of public officials for an initiative that first-wave women’s rights advocates had imagined.

The same kind of independent organizing defined the best-known nineteenth- and early twentieth-century political movements. Stirred by the Fugitive Slave Act of 1850 and the US Supreme Court’s decision in Dred Scott v. Sanford denying citizenship to people of African descent and depriving Congress of the right to ban slavery’s expansion into federal territories, abolitionists pushed and aroused the public and political parties to take a stand for immediate emancipation of enslaved people. They established numerous organizations and deployed a variety of tactics, including petitions, moral suasion, assemblies, and anti-slavery literature, to advance an abolitionist agenda that many elected officials opposed.

Like some abolitionists, proponents of woman suffrage, led by Susan B. Anthony, Carrie Chapman Catt, and Alice Paul, defined their own goals and pursued their own, sometimes divergent, tactics. “Suffragettes” established the National American Woman Suffrage Organization, made speeches, lobbied legislators and presidents, and formed the Woman Suffrage Party in a successful campaign to enact the Nineteenth Amendment to the US Constitution.

Each of these historical examples shows that change movements gain power through pressure tactics that disrupt politics as usual. If current activists hope to transform their protests into powerful movements with significant political power, they, too, should organize, specialize, and set their own agendas. Activists should focus on crystallizing grievances, dramatizing injustice, and mobilizing supporters—all with a view toward gaining political influence, forming coalitions, and making strategic electoral calculations.

The last thing that genuine grassroots change agents ought to do is forfeit their independence to career politicians.