To Upgrade or Not to Upgrade—Is That the Question? 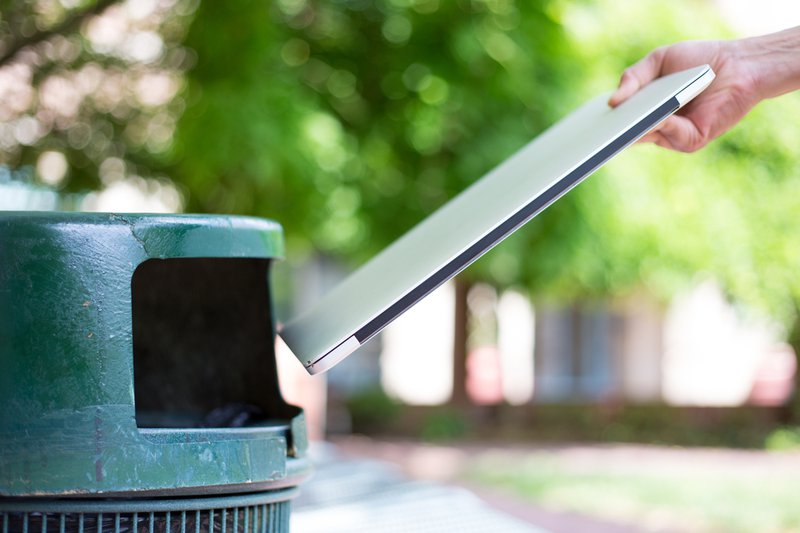 As you scrimp and save for Apple’s upcoming iPhone 8, you’re probably thinking: If tech disposal processes are improved, can I feel less guilty about upgrading my phone?

Or, maybe you’re not. But you should. In a 2013 article published in the Scientific American, David Pogue notes that a rapidly growing fear of obsolescence encourages consumers to opt for newer phones after 1 to 2 years. Short-lived phone ownership is partly motivated by cell phone contracts and frequent tech upgrades, causing last year’s model to get old before it even touches your ear and to end up as e-waste—discarded electronic products—often with adverse effects.

In a world that’s increasingly connected and infatuated with the “next best thing,” tech disposal will probably always be problematic—yet mitigating the negative spillover costs will require that we radically expand how we think about the consumption and disposal of electronics.

To understand—and combat—the impact of e-waste, it first helps to understand its scope. For starters, where do our unwanted cell phones end up? Many of them end up in sites like Agbogbloshie, located in Accra, Ghana, and one of the largest informal electronic waste disposal sites in the world. Discarded phones, monitors, and computers, among other products, pepper the once prosperous wetland. There, Ghana’s youth break down and burn electronics to uncover rare earths and precious metals that can then be sold for school fees or other expenses—but at a dangerous cost. Negative spillover costs dwarf the increased income. Armed with little to no protective gear, “circuit boards, plastics, and copper wire” are burned and melted to recover rare earths such as copper and gold. In the process, plumes of smoke comprised of lead-heavy gas and mercury are carried into nearby communities and shared resources.

In a phone conversation with Donna A. Patterson, a fellow in New America’s International Security Program and the director of Africana Studies at Delaware State University, Patterson noted the disastrous consequences of informal e-waste dumps for neighboring communities in locales such as Agbogbloshie. Patterson warns that high instances of leaded gas and runoff in nearby water sources will have disastrous health consequences in lower-income communities over time. Moreover, watering crops or feeding communities with polluted water sources impacts more than just workers. Ivan Watson of CNN notes that informal e-waste workshops in Guiyu, China, another major e-waste disposal site, release “toxic heavy metals like lead, beryllium, and cadmium,while also releasing hydrocarbon ashes into the air, water and soil”—also leaving visitors with a burning sensation in their eyes.

So as informal e-waste sites gain notoriety, how can we—international actors—move to extinguish the gnawing threat of e-waste—or at least mitigate its effects?

The Basel Convention, for one, controls transboundary disposal and travel of hazardous waste, effectively prohibiting wealthier nations from sending e-waste to lower-income countries. Yet some have convinced themselves that because of the Basel Convention, e-waste in sites in places like Agbogbloshie only comes from sub-Saharan African countries. Ken Christensen and Katie Campbell’s article, “The US Is Still Dumping Some of Its Toxic E-waste Overseas,” argues that Dell Reconnect, one of the world’s largest e-waste recycling programs in the world, has hit a few snags. Activist Jim Puckett, of the Basel Convention, traced bugged electronics recycled through Dell Reconnect to several lower income countries outside the sub-Saharan African region. This isn’t to suggest that these avenues for waste disposal are illegal, or that international policies can’t be used for good. Historically, legal transnational deals were formed to manage excessive waste. In 1986, for instance, the United States and Canada penned a bilateral agreement to transport hazardous waste. However, like other waste streams, e-waste is still problematically exported to places like Agbogbloshie and Guiyu, despite efforts by the Basel Convention and the Responsible Electronics Recycling Act.

So what else can be done? Heeding international conventions ought to be a part of how we re-conceptualize our own use of electronics. A 2015 study conducted by the United Nations University found that 41.8 billion tons of e-waste were generated worldwide in 2014, 7 percent of which were small ICT devices (mobile phones, personal computers, and printers). That number is expected to increase as much of the world enters the middle class, gaining purchasing power and a growing desire to procure the trappings of wealth. As countries similar to Vietnam are newly classified as “middle income,” their domestic goods consumption is increasing. According to Anh-Minh Do of Tech in Asia, for every 100 people in Vietnam, there are 145 cell phones, and statistics show the number of phones will only increase in the future.

And as newly minted middle-income countries increase cell phone ownership, wealthier countries continue to stay true to form. A 2017 study conducted by the Pew Research Center found that 95 percent of adults in the United States own at least one cell phone at any given time, to say nothing of the other personal electronics we burn through in our lifetimes. As our cell-phone contracts re-up, and as corporations make trendier products and we lose (or break) countless phones, that number will only go up. With more consumers and loyal existing customers, cell phones will only increase in their percentage of overall e-waste.

In other words, as purchasing power increases, we may see more Agbogbloshies—if we don’t think smarter about production, consumption, and disposal.

During a sit-down with Sharon Burke, senior advisor to New America’s Resource Security program, Burke notes the astounding innovation that is emerging to reclaim recyclable materials in cell phones, as well as the benefits available to corporations for participating. With long lives, important tech, and rare earths, cell phones are a start in minimizing our seemingly boundless e-waste footprint. Burke points out that if we don’t do something about e-waste streams in the near future, we can expect to be consumed by the ever increasing piles of personal tech. But as bad e-waste increases in volume, Burke adds, the moral hazard argument of e-waste disposal can only go so far (not to mention that commodity prices create an environment of diminished returns for corporations). Forcing consumers to coordinate purchasing habits with what is “morally good” will not yield a positive response, so she supports the prevalence of corporate innovation as e-waste mounts.

Luckily, some corporations are already taking initiative and picking up the slack in production and disposal of finished tech. Apple, for instance, recently unveiled a robot that disassembles and recycles old phones. The robot, Liam, dismantles used iPhones while also  salvaging cobalt, lithium, gold, copper, platinum, and aluminum. Although formal plants exist where humans can safely rescue these materials, automating the process can minimize the health risks posed in both formal and informal sites.

Like Patterson, Burke notes the importance of consumer awareness. Consumers won’t stop buying iPhones, but consumer demand for safe practices can change the game. Corporations like Samsung, VIZIO, and LG currently fund a take-back program, which has become a joint venture between corporations, the New York City Department of Sanitation, and ERI called e-cycleNYC. So far, e-cycleNYC has collected more than 10 million pounds of electronic waste.

Ignoring the mushrooming threat of e-waste would likely turn a looming problem—one punctuated by increased consumption—into a catastrophe. After conversations with experts in the field, coupled with an assessment of electronic waste and innovation within corporations, it’s clear that an effort that coordinates and takes into consideration the roles of governments, producers, consumers, and commodity prices in clean-up processes will determine the future of e-waste streams around the world. Understanding these streams in a holistic light will grant key players the sensible know-how to make smart choices—and while this may not rid the world of e-waste for good, it can, at a very minimum, thwart a global catastrophe.