The Socialist Roots of the Bagel 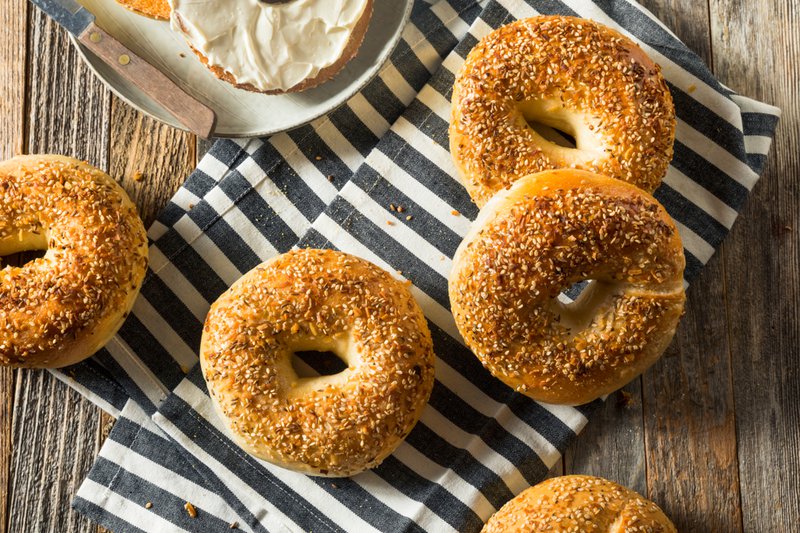 At a recent CNN town hall, presidential hopeful Sen. Bernie Sanders was asked how his Jewish identity has affected his outlook and upbringing. Sanders, who is normally restrained when it comes to his heritage, recalled the enormous impact of the Holocaust on his childhood.

“I think at a very early age, before my political thoughts were developed, I was aware of the horrible things that human beings can do to other people in the name of racism or white nationalism—or in this case, Nazism,” he said.

Various journalists have written about the possible links between Sanders’s Jewishness and his politics—from questioning the exact nature of his religious beliefs to investigating whether his time on a kibbutz may have informed his commitment to socialism. But for all the speculation over his heritage, pundits may have overlooked a distinctly Jewish—and socialist—element of his heritage: the bagel, which Sanders enjoys with lox.

Like Sanders’s family, the bagel’s storied history begins in Poland. The first mention of the bagel pops up in around 1610, in Jewish community ordinances from Krakow. As Maria Balinska highlights in her book, The Bagel: The Surprising History of a Modest Bread, there are several theories surrounding the origin story of the bagel, with perhaps the most plausible pointing to restrictions on Jewish baking that forced the Jewish people to boil rather than bake their bread.

Whatever the real story, the rounded dough of mythic proportions is inextricably intertwined with Jewish history and socialism. Set against the backdrop of rapid political change sparked by the industrial revolution, bakeries and bagel shops served as crucial meeting grounds for political activists during the 19th and 20th centuries. Bakeries, which flew below the radar of both concerned parents and the authorities, provided the perfect cover for those eager to debate politics and pick up new recruits. As a result, the evening lines of young workers were frequented by political activists, and socialist groups such as the Bund sprang up at the turn of the 20th century around bagels.

At around the same time, the bagel began making its way across the Atlantic as emigrants transported family bagel recipes to Montreal and New York City. In New York City, bagel bakeries were initially restricted to the Jewish areas of the Lower East Side, where bakers toiled in the shadows of boiling ovens for 14-to-20-hour days. Spurred by the unionizing of other groups in New York City, as well as immigrant bagel workers’ exposure to socialist and progressive ideals back in Russia and Eastern Europe, the Beigel Bakers Union (Local 338) was formed in 1907. It quickly gained momentum, representing all of the city’s 30-some-odd bagel bakeries by the 1930s—and it fiercely defended its workers, organizing strikes in 1951 (dubbed “a bagel famine” by The New York Times), 1957, and 1962.

The bagel’s status as the fuel of the proletariat, however, wouldn’t last. It would soon be supplanted by a new phase: mass production and commodification.

In 1963, inventor Daniel Thompson perfected a bagel machine that could produce more than 2,000 bagels per hour. He shopped his invention around to bagel bakeries throughout the United States, finally receiving an eager response from Lender’s Bagels in New Haven, Connecticut.

The Lender family capitalized on the bagel machine and the new invention of frozen bagels, foreseeing a world of mass-produced bagels that could be stored and shipped around the country. With this change, Local 338, which had previously served as the chief arbiter of the bagel craft, was rendered obsolete. Trained bakers, who painstakingly labored in boiling kitchens and carried centuries of family recipes and know-how, were replaced by enterprising capitalists eager to mass-produce bagels as a base for sandwiches. Their efforts, according to author Matthew Goodman, corrupted the bagel’s “small, flavorful, dense, and crusty” form into “now precisely the opposite: huge, insipid, and pillowy soft.”

In 1971, hoping to guarantee their future pensions, the remaining members of Local 338 voted to join forces with Local 3, the New York chapter of the AFL-CIO’s Bakery Confectionery and Tobacco Workers International Union. Thus came the end of Local 338—a dissolution that took place amidst a wider crisis of labor, as unions across America began to dwindle and lose power in the face of global trade and cheap labor.

Now a ubiquitous staple in coffee chains and lunch spots, the bagel as we know it today has strayed drastically from its roots. The bagel shop—once a communal space where families and friends would line up for blocks waiting for hot, fresh-from-the-oven bagels—has largely ceased to exist. And while independent bagel shops are still around, many are distinctly bourgeois—overpriced, flocked to by Instagram influencers hungry for their next selfie, far removed from the cheap shtetl meal of tired workers. Others serve as relics of the past, employing traditional methods to remind old bagel-goers of what the boiled bread used to be.

While independent bagel shops are still around, many are distinctly bourgeois—overpriced, flocked to by Instagram influencers hungry for their next selfie, far removed from the cheap shtetl meal of tired workers.

For bagel chains, remaining relevant means continually expanding selections of bagel types, spreads, and garnishes. The result? Menu items that would make your bubbe’s head spin—Einstein Bros. Bagels, for instance, offers everything from Spinach Florentine bagels to Jalapeño Salsa Reduced Fat schmear. This trend, Occidental professor Peter Dreier notes, has insidious implications: “The simple bagel of Jewish immigrant ancestors has become a matter of what advertisers, manufacturers, and business school professors call ‘product differentiation,’ which seeks to fragment the marketplace with choices rather than bind us together around a sense of tradition and common purpose.”

That’s not to say all hope is lost for the crusty bagel that bubbe used to pick up from around the corner. Perhaps it’s time for bagel lovers and worker justice advocates alike to remember what Local 338 stood and fought for—and to rally behind a presidential candidate who promises to restore power and bargaining rights to labor unions. A leader who will protect and strengthen the rights of immigrant laborers, and who recognizes the importance of community, heritage, and shared spaces—whether that’s the bagel shop, the local recreation center, or a place of worship. Perhaps a Polish Brooklynite, someone who might have made the immigrant bakers of Local 338 proud—and who likes his bagels with lox.