Poor Shaming—But This Time in the School Cafeteria 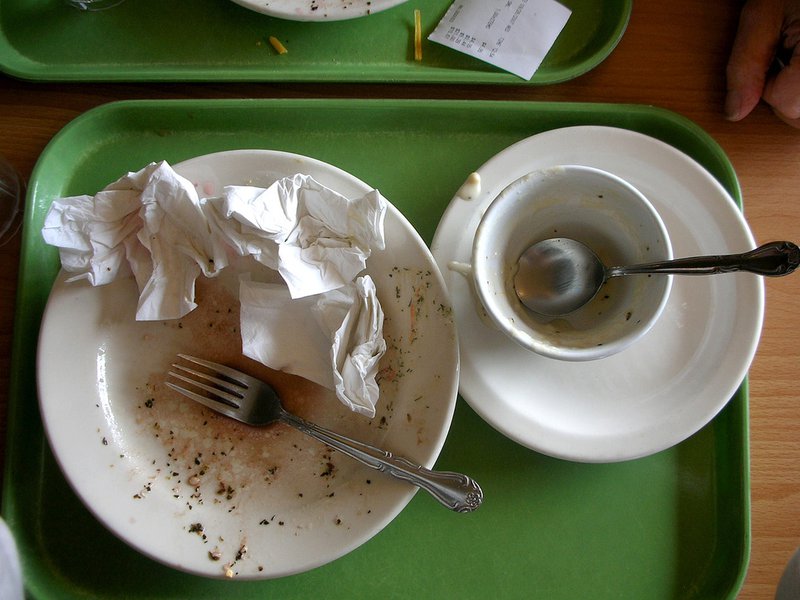 New Mexico State Senator Michael Padilla recently ended a common practice that he was subject to in school: “lunch shaming.” When he was young, Senator Padilla didn’t have enough money to pay for his school lunch. This meant that in order to get a hot meal, he had to pay off his “debt” to the school by helping with janitorial duties, like mopping the cafeteria floors. The experience stayed with him, and his bill to end lunch shaming was signed into law by Republican Governor Susana Martinez.

Of course, Senator Padilla’s story is not an isolated one. Lunch shaming happens across the country, and it takes many forms. Some students are stamped on their forearms with a message for their parents saying “lunch money,” others have their hot lunch thrown out in front of them, and still others are given cheese sandwiches while their paying classmates have US Department of Agriculture-approved hot lunches.

But whatever form it takes, this shaming (and the National School Lunch Program in general, given the FDA’s relaxed new stance on school nutrition) has recently been thrust into the spotlight—and other states would be wise to take a cue from New Mexico’s lunchroom pivot in the months ahead.

New Mexico’s bill, cited as the first of its kind, bans any practice that publicly identifies or stigmatizes students for being unable to pay for lunch, and it makes sure students receive a healthy lunch, regardless of their ability to pay. Though New Mexico represents a small share of the federal National School Lunch Program (NSLP), which operates in over 100,000 schools nationwide and costs over 10 billion dollars a year, it has become a leading example of how to deal with the challenges of administering a massive public program at the state level in an equitable and humane way.

Part of the reason for the high cost of the NSLP is that it provides free and reduced meals for students living in poverty. But enrollment in free and reduced meal programs isn’t generally automatic, and some of the roughly 48 percent of students who qualify may not actually receive these benefits. Or put another way, some of the students who have been subject to lunch-shaming practices live in economic circumstances that mean their parents are genuinely unable to afford putting food in their children’s mouths at lunchtime.

But the consequences of this shaming follow students outside of the cafeteria.

Critics liken lunch-shaming practices to bullying. Rogi Banks, a Howard University doctoral candidate and student leader for the National Association of School Psychology, explained the following to us in an email: “‘Lunch shaming’ can easily become an acceptable form of school-wide bullying…. School psychologists spend a lot of time working with teachers and administrators to minimize the prevalence of bullying among students…. Adults may also need support in understanding the role they play in this phenomenon.” Bullying can have long-lasting effects, such as increased anxiety, sadness, and physical health complaints. It makes sense, then, that lunch shaming, as a form of school-sanctioned bullying, could do the same.

Shaming students for unpaid debt at school also has damning parallels to punitive practices that low-income adults face when they are unable to pay minor debts. As the nation was recently reminded in the wake of investigations into policing and municipal court practices in Ferguson, Missouri, the use of debtors prisons is still alive and well in America. Ferguson residents (as a DOJ report and numerous other investigations by both news organizations and legal services organizations allege) have routinely been slapped with arrest, jail time, and compounded debt when they are unable to pay such minor municipal fees as parking tickets.

When students are made to clean the cafeteria as punishment for being unable to pay for lunch, you don’t have to read between the lines to see early traces of the same system that disproportionately punishes low-income and historically disadvantaged adults for minor debt.

To be sure, school nutrition departments are responsible for keeping a balanced budget, and this is hardly an easy task—some 76 percent of school districts had unpaid debt from school lunches at the end of the 2014-2015 school year. But as a recent New York Times article points out, school nutrition directors have other options at their disposal to ensure a balanced budget, such as using revenue from other, non-subsidized cafeteria sales. Regardless, schools should cut students out of the process and work with parents directly to resolve any unpaid cafeteria debts. New Mexico’s new law specifically requires this, and it lays out a clear blueprint for resolving debt issues with parents.

But what else can schools do? For students whose debt remains unpaid because of difficulty accessing free lunch programs, school districts can also reconsider their strategy for targeting free and reduced lunch access, including implementing automatic sign-up, applying for community eligibility, or even providing universal free meals to ensure free meals reach every student who needs them. For instance, New Mexico’s law works to provide easier enrollment in the national free and reduced lunch program, particularly for children experiencing homelessness.

“A 6-year-old maybe up to about an 11- or a 12–year-old, a 14-year-old, they have no power to fix this issue,” State Senator Padilla said in an interview with NPR. “I don't know why we’re punishing them. So this [law] prohibits that…. and it focuses more on the child’s well-being rather than the debt itself.”

Texas and California have already followed New Mexico’s lead—both states have introduced legislation to ban the practice of lunch-shaming. But having just a handful of states take action isn’t enough to extinguish the problem. If other states are serious about ending practices that shame children for living in poverty, they, too, should implement a similar prohibition.