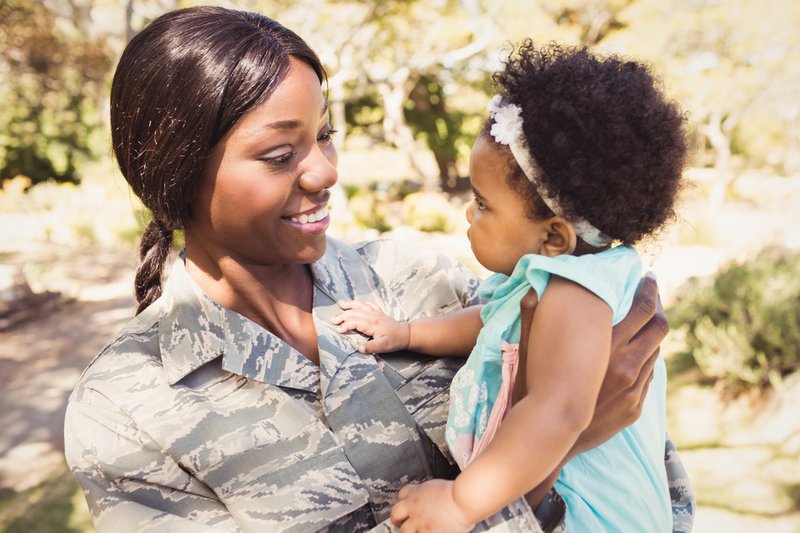 One evening ten years ago, I rushed home from work to pick up my 1-year-old daughter at her new caregiver’s house. When I arrived, I found my daughter strapped into her high chair, where she had apparently been restrained for hours. She fell apart when she saw me, sobbing and reaching out from the straps of the seat; her lower body was covered with a rash and a diaper that had not been changed in hours. The day before, her first there, had been little better: she had spent significant time in the high chair then, too, although I did not know it at the time. We never brought her to that caregiver again. I still struggle with the guilt I feel for ever bringing her there at all.

I was not a negligent or apathetic parent; I was simply desperate for child care. At the time, I was an active duty Marine Corps pilot with a Marine husband preparing to deploy again. The on-base military child care system had failed us—we were waitlisted for a center, but I had to work and had no options. Instead, I found a caregiver through the National Association of Child Care Resource and Referral Agencies (NACCRRA), now known as Child Care Aware of America.

After two more months of patchwork care, more negative experiences with providers, exhausted vacation days, and constant stress, I scored a spot for my daughter at another on-base Family Child Care (FCC) home. Unfortunately, she, too, moved about 18 months later, throwing us back into the maelstrom. My child care problems were never solved. As a result, I left active duty— along with retirement and college savings and a career I had loved—and transitioned to the Reserves, where I could occasionally work with infrequent and unreliable child care.

My family is far from unique in our childcare woes. New America’s Better Life Lab recently released its Care Report, one of the most thorough and comprehensive analyses ever completed on child care in the United States. The Care Report measures childcare across the country in three areas: cost, quality, and availability. The results of the Care Report are demoralizing.

Annual full-time care for a child, on average, costs more than the average in-state college tuition and nearly exceeds the cost of rent for many families across the United States. Quality varies from really good (and really expensive) to not just bad, but incredibly unsafe. Availability ranges from relatively high to abysmally low, and factors like age and geographic location exacerbate gaps. Clearly, we have a child care problem.

I am sharing my experience because the military system is frequently held up as the solution—an example of what child care in America could be. Yet my story is a cautionary tale. While robust and superior to the system illustrated by the Care Report (which is no system at all), many problems that plague the civilian world—incompatible work and school hours, biased assumptions about gender roles at work, and unequal burdens of domestic work at home—are replicated in the military child care system. More importantly, the military system codifies existing gendered expectations while reinforcing an outdated work-life paradigm that is unrealistic for the majority of American families today to match, making family survival and growth continually out of reach for many. Certain aspects of the military child care system could potentially be broadly replicated, but cloning this system without drastically changing our work and family life norms and expectations will likely result in more of the same.

The military child care system has its advantages: it is highly affordable, regulated, and, in theory, widely available. Costs are amazingly low for families across the spectrum. Bases are secure, childcare facilities are highly regulated, even FCC homes, and inspections are frequent and thorough. The institutionalization of military child care confers a degree of safety and comfort that could be difficult to find off base. Childcare centers on base are often open for 12 hours or more. Military caregivers deeply understand the complexities of military life, adding compassion for military families that might not exist outside this system.

These advantages, however, are inconsistent. With the exception of cost (which, to be clear, is low across the board), everything varies widely depending on a child’s age, family duty station, and individual provider.

The negatives also vary widely based on these factors.

Overcrowding is the long pole in the tent. Over the years, we’ve tried to enroll our children in a number of different military child care centers or FCC homes; wait times almost always made center use impossible. While pregnant with our oldest, I was informed of a one-year wait for infants in the centers and a two-month wait for FCC homes. When we finally got into an FCC home, the provider moved ten months later; we were still on the waitlist for base centers with no FCC home openings. When we later moved to D.C, we were informed of a three-year wait for the center at Fort Myer, and the few FCC homes were too far away to use. (Note: current wait times at the same centers range from months to a year.)

Drop-in (temporary) care, is inadequate. We managed to get our children into drop-in slots from time to time, but care was inconsistent, impersonal, and, eventually, nonexistent. Our kids were so miserable and the care so unreliable—spots were not guaranteed despite my Reserve requirements—that when we had a lucky break on a spot for one child in a local (costly) preschool, we took the dual financial hit of much higher costs plus no income for me without thinking twice, since the reliability and quality would be worth the financial pain. Fully enrolled families have more consistency in centers than drop-ins, but many military families do not fall into the top priority category, so they use similar patchwork care.

Military moves also impact availability, especially in FCC homes. Caregivers move, forcing families to scramble, and families move as well, so the child care search is continuous and results in constant anxiety. Twice, caregiver moves and a resulting loss of care hit us while I was solo-parenting with a deployed husband.

And as the recent high-profile cases of abuse at the Fort Myer Child Development Center illustrated, even with a high level of institutionalism, caregivers and facilities can slip through the cracks.

Outside of availability, the biggest problem impacting the military system is how childcare hours are frequently incompatible with required working hours, even with the expansion of some centers to 14 hours of care each day. As a pilot required to fly nights, no center could help me, nor could our regular provider with any consistency.  FCC homes can be even more inflexible: our first home closed at 4:30 pm, a full hour before my office shut down, and later FCC homes were no better.

Finally, and most critically, the military child care system—like the military itself and the rest of America—expects women to be the primary caretakers but punishes them when they are. A senior officer in my unit, upon seeing me rush out of the office at 4:10 pm to pick up my daughter before her FCC home closed at 4:30, rolled his eyes and said, “Must be nice to prance out of here early every day!”

Overall, when it works, the military system is better than the one the rest of the country lives with. But the problems that plague America’s patchwork child care system are endemic in its military counterpart as well, which means that replicating the military’s system on a larger scale is likely to only exacerbate the deeper problems in today’s workforce that have created and enabled this crisis. Gendered expectations in the workplace and at home for parents; a gross undervaluing of child care and those who provide it; emphasis on maternity leave versus family leave; and a paradigm built upon a 1950s model of what an American family looks like that is not remotely realistic today all combine to create an unrealistic world that forces families to struggle daily to survive.

None of this is to say that America at large shouldn’t borrow certain elements of the military’s childcare system to improve upon what exists now. But like the state of American childcare as a whole, military child care is inconsistent and highly gendered. It is at best a mild antidote for specific symptoms instead of a solution in and of itself for the sad state of childcare in America today.