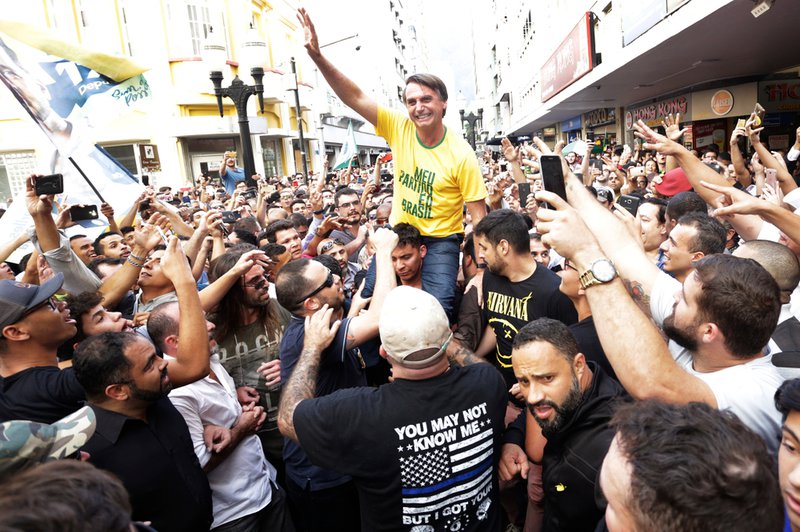 Three days before the most polarized election in the history of Brazil’s young democracy, a video making controversial claims about one of the presidential candidates appeared on Facebook. “Look what the Workers’ Party is putting in crèches,” read the caption. The minute-long videoaccuses Workers’ Party candidate Fernando Haddad, who lost Sunday’s election by 6 percentage points, of planning to distribute baby bottles with penis-shaped teats.

“It’s a part of the gay kit, it’s Haddad’s invention,” says the video’s narrator at one point.
Within 48 hours, the rumor-checking website E-Farsas (“E-Hoax”) said it had been watched more than 3 million times.

Although fact-checkers debunked the erotic baby bottle story a full day before Brazilians headed to the polls, it likely barely mattered: The 2018 Brazilian election was dominated by false news. Experts suspect that coordinated misinformation efforts may have played a part in Brazil’s elections as far back as 2010, but this year was supposed to be an improvement, with social media platforms like Facebook working with fact-checking efforts to stem hoaxes and propaganda. It didn’t work. Scrambling the discourse around the election even further was WhatsApp, the Facebook-owned encrypted messaging service where the movement of misinformation is untraceable. And it coincided with the rise of Brazil’s far-right president-elect, Jair Bolsonaro, whose loyal supporters are one of the main groups responsible for spreading misinformation.

“This campaign showed that political communication is completely vulnerable, especially on WhatsApp because it’s not monitorable,” said Pablo Ortellado, a University of São Paulo professor who runs GPOPAI, a research group that studies public policies for information access.

The group’s study of the information shared in public WhatsApp groups confirms Ortellado’s suspicions that the platform was likely a huge source of misinformation: Just 8 percent of the most-shared information in groups was correct. “There was a frightening amount of low-quality information,” he said.

On Friday, Oct. 25, the same day the baby-bottle rumor began spreading, the Organization of American States called the spread of fake news via private networks to manipulate the Brazilian electorate “perhaps unprecedented.” Laura Chinchilla, a former president of Costa Rica who oversaw the OAS’ mission to observe Brazil’s elections, said: “It’s such a new phenomenon and so recent, it is the first time in a democracy we are observing the use of WhatsApp to massively disseminate false news.”

The reference to the “gay kit” in the baby-bottle rumor wasn’t arbitrary: It’s been a frequent talking point of Bolsonaro since 2011, when his eventual political adversary Haddad was the country’s minister for education. At the time, Brazil’s evangelical caucus in its congress had taken issue with a proposed educational initiative to combat homophobia, labeling the “School Without Homophobia” materials as the “gay kit.” Bolsonaro, then a National Congress representative for the state of Rio de Janeiro and himself famously homophobic, adopted the cause as his own. In 2011, he sent people to distribute pamphlets outside Copacabana’s subway stations, saying that the educational materials would “stimulate homophobia” instead of fighting it. Six years later, in August 2017, Bolsonaro’s base had grown and he was gathering momentum to become a presidential candidate. That August, when he posted a video with transgender reality star Inês Brasil declaring their mutual disgust for the “gay kit,” their meeting went viral.

The actual educational materials were no longer being used by this point. But the “gay kit” became an important example of how false information could be used to manipulate public policy in Brazil, says Yaso Cordova, an affiliate at Berkman Klein Center at Harvard and a fellow at DigitalHKS at Harvard’s Kennedy School: “The most radicalized people at the time [2011] campaigned strongly with misinformation.”

Aware that fake news would be a problem in its elections this year, 24 Brazilian media outlets teamed up in July to tackle the spread of false information. Projeto Comprova (“Project With Proof”) had backing from Google, Facebook, and Harvard’s Shorenstein Center. Additionally, long-running fact-checking agencies and websites informally collaborated to tackle misinformation, with one such group flagging 50 instances of fake news in 48 hours the weekend before Sunday’s election.

What differentiates this election, according to Cordova, was the apparently highly organized spread of misinformation, disseminated across multiple social networks to make it seem more credible. “In this election, misinformation campaigns were far more coordinated [than in the past]—you had a part of one false story on WhatsApp, another part on YouTube, another on Facebook, another on Twitter,” she said.

Facebook, facing widespread criticism after its alleged role in spreading misinformation everywhere from the U.S. to Myanmar, also came under pressure to act in Brazil following an onslaught of misinformation after the assassination in March of Rio city councillor Marielle Franco. But this isn’t a new role for the platform in Brazil, which along with Twitter and 13-year-old social media platform Orkut has played a role in coordinated misinformation campaigns in previous presidential races in Brazil.

During 2014, more than 100 fake Facebook and Twitter accounts were used to boost support for politicians competing in the election. The long-term strategy, which created profiles a couple of years before they would be used for political purposes, employed real-life people to man multiple false profiles. They posted made-up information about daily life, turning political only when election season came around. A similar strategy was used in 2010, which the BBC revealed that paid-for blogs disseminated fake news favoring Dilma Rousseff’s 2010 election campaign via Orkut and Twitter. Rousseff denied the allegations.

But while Facebook and Twitter were willing to work with Brazilian fact-checkers this time around, one social media giant was not. WhatsApp has an estimated 120 million users in Brazil, a country with around 220 million citizens. And despite being Facebook-owned, WhatsApp has a history of being standoffish toward Brazilian attempts to bring it in line—even resisting court orders from Brazilian judges in criminal cases in 2016.

“One of the biggest difficulties for fact-checking in these elections was to get to the people who most needed it,” said Tai Nalon, founder of fact-checking agency Aos Fatos (“To the Facts”). Nalon says that Aos Fatos was fairly successful via Twitter and Facebook, particularly with its fact-checking bot Fátima, to which users could send dubious links to be checked. But unlike Facebook and Twitter, Nalon said WhatsApp—which she described as “the biggest misinformation engine during elections this year”—was unwilling to take action against fake news on its platform.

Businesses, too, are able to use the platform to send out mass messages to clients. In mid-October, an investigation by leading Brazilian newspaper Folha de São Paulo discovered a multimillion-dollar “anti-Worker’s Party campaign,” funded by a group of Brazilian business owners. With capacity to send out millions of WhatsApp messages instantaneously, the group’s activity constituted illegal campaign activity which may have benefitted Bolsonaro. “My adversary is seeking to benefit from electoral crimes,” Haddad tweeted shortly after the news broke.

What makes WhatsApp so potent a venue for misinformation? “WhatsApp is a private network, but at the same time it’s mass dissemination,” said Ortellado. “This means you can’t know if a misinformation campaign was launched, you can’t make counterpoints to refute it, and you can’t determine who’s responsible.” It could often start with a rumor, overheard in conversation or appearing via other social media—or perhaps read on blog with decidedly political leanings and little credibility, like the conservative website O Antagonista (“The Antagonist”). People then warn their friends and family on WhatsApp, or pass on the rumor via group chats on the service. There, away from public notice, unverified information could spread like wildfire.

Amid concerns over misinformation during the campaign, WhatsApp said that it had been taking proactive measures to isolate accounts that appeared to be spreading misinformation using its own detection mechanisms. However, fact-checker Nalon says the company “at no point showed itself willing to sit down and talk with fact-checkers to think about solutions.”

Misinformation could be here to stay for Brazilians. Social networks such as Facebook and WhatsApp are often included in phone plans due to agreements with network operators.
But Cordova says that these plans, used by approximately 70 percent of Brazilians, often offer limited online access to information away from social media platforms. With a lack of local news outlets in rural areas creating information deserts, people depend even more heavily on both social media and interpersonal conversations. In addition to cultural factors, like a public exhaustion with Brazil’s astounding levels of violent crime and an evangelical population that feels ignored by recent governments, Cordova believes that the continued spread of misinformation helped elect Bolsonaro—and the conditions that allowed it to happen are unlikely to change.

“These factors created a yearning for a savior,” said Cordova. “These yearnings slotted into our election cycle, and ended up electing a populist with dictatorial tendencies.”