The Death of Cambodian Democracy 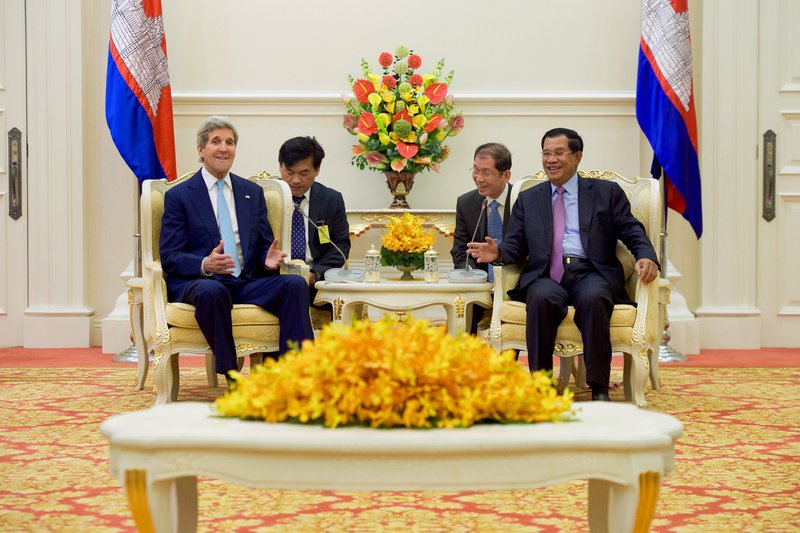 Cambodia’s opposition leader, Kem Sokha, was arrested shortly after midnight on Sunday, accused of conspiring with the United States to overthrow the government. Other opposition members may be next in line, as wild conspiracy theories swirl in government-aligned news sources, claiming that civic groups are partnering with the opposition and foreign powers to stage a “color revolution.”

Prior to Kem Sokha’s arrest, Cambodia was already in the midst of a major crackdown on independent media and critical NGOs, as pivotal elections loom next year. In the span of a few short weeks, the government has shut down 19 independent radio stations, forced the closure of one of the most prominent independent newspapers in the country, and shuttered the country office of a longstanding democracy support NGO.

These tactics and goals aren’t altogether new. Prime Minister Hun Sen, a former Khmer Rouge commander, has ruled the country with an iron fist for over three decades and is a seasoned pro at employing purges and threats to bully his critics and hamstring the opposition. But the rapidity with which the most recent crackdown has ensued makes it unprecedented. The developments represent something different, and more sinister, than before—and so tolls, it seems, Cambodian democracy’s death knell.

The latest round of attacks has taken down institutions that had weathered repeated government crackdowns for years. The National Democratic Institute, a U.S.-backed democracy assistance organization, had been operating in Cambodia for 25 years, working with both the ruling party and opposition, before the government abruptly ordered it, on Aug. 23, to cease its operations, giving the organization’s foreign staff one week to pack up and leave Cambodia.

Next up was The Cambodia Daily. The prominent newspaper, known for its strong, independent reporting, was forced to close on Sept. 4 after it failed to pay an arbitrarily levied $6.3 million tax bill. It had been in publication since the early 1990s, and, along with a number of now-shuttered radio stations broadcasting programs from Radio Free Asia, Voice of America, and Voice of Democracy, was one of the last spaces for critical, independent coverage.

Kem Sokha, himself, had previously evaded arrest in mid-2016, following another set of bogus charges driven by leaked tapped phone conversations. He spent more than six months hiding out in the opposition party headquarters in Phnom Penh before receiving a royal pardon in December (after Hun Sen agreed to back down). This time, however, he wasn’t so lucky, and he now sits in prison on trumped-up “treason” charges that could keep him in jail for decades.

So why is this happening now? The government’s dramatic new moves come in the heat of a shifting electoral landscape, one in which Hun Sen has reason to be worried about his prospects in the next general election, scheduled for July 2018. Despite years of strongman rule, Cambodia still has formal elections, and in 2013, the ruling Cambodian People’s Party (CPP) suffered a shocking near-loss to the opposition Cambodia National Rescue Party (CNRP), which precipitated months of street protests. In local elections, which took place this past June, the opposition again made huge gains.

That appears to have been too much for Hun Sen to take. And so in its efforts to ensure that the 2018 contest won’t be fought on a fair playing field, the CPP government has now moved into uncharted territory.

Shifting geopolitics is another significant part of the story. For years following the devastation wrought by the brutal Khmer Rouge regime and subsequent civil war, Cambodia has been reliant on international aid. Since most of this aid came from countries, especially those in the West, with an interest in seeing Cambodia develop strong democratic institutions, the government was generally careful to avoid going too far in its periodic crackdowns.

But now, with China increasingly acting as the main foreign power investing in Cambodia and backing its government, democracy is no longer a priority, and Hun Sen has more space to maneuver. What’s more, it doesn’t help that that the Trump administration seems to care little about democracy, especially in a country like Cambodia, or that the wider international community remained largely silent over the past two years as the warning signs mounted.

The government’s next move could be the total dissolution of the opposition. Earlier this year, the ruling party rammed through amendments to the Law on Political Parties, which allow for parties to be dissolved for violating a slew of vaguely worded prohibitions, including having members with criminal convictions. The amendments were initially targeted at the CNRP’s exiled former president, Sam Rainsy, who was forced to resign from the party following their passage, along with a number of other elected officials from the opposition who had been similarly targeted with politically motivated charges.

Now, thanks to these legislative changes, Kem Sokha’s potential conviction could be used to shut down Cambodia’s only viable opposition party. The CNRP, backed into a corner and concerned for the safety of its top leadership, has refused to appoint a new party president, setting up a dangerous game of chicken that could render already dubious upcoming elections effectively meaningless.

With a legal framework designed as a bludgeon for the ruling party to wield and with little stopping the government from continuing its crackdown, it appears that Hun Sen has finally given up on even the pretense of a democratic system.

“Descent Into Outright Dictatorship” was the headline emblazoned on the cover of the final issue of The Cambodia Daily, and it’s an apt one. Cambodian democracy—always more of an aspiration than a reality—is effectively dead, trampled by a government that seems bent on retaining control, no matter the cost.