Beyond the "Peaceful" Protest 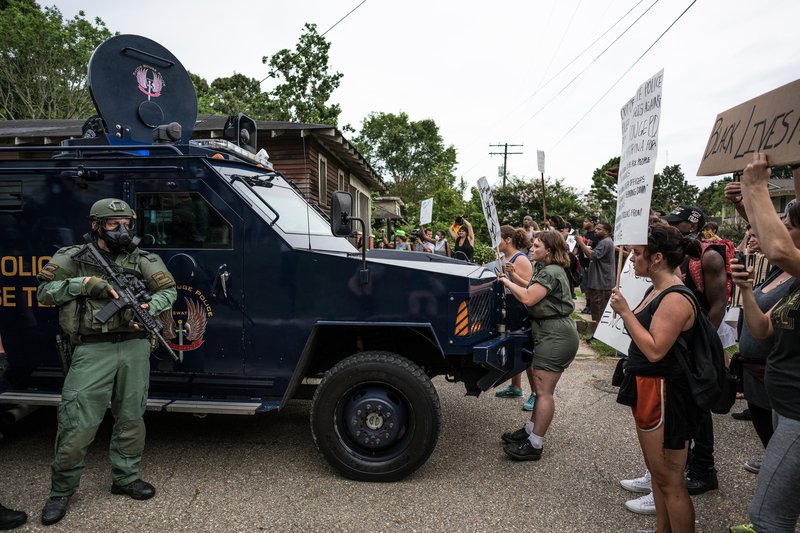 The largest march in United States history brought joy, catharsis, and civic pride to the streets after a sharply contested election shaped by widely recognized misogyny.  The mere act of acknowledging gender-based oppression—and celebrating solidarity with the women who shoulder it—was intensely gratifying for the swelling crowd. Millions of people seemed to be saying to and with women, “We see you. We hear you. And you are important.” The march was lauded as a symbol of the rights our nation was founded on.

But did you notice something?

For protesters and media alike, the clearest marker of the march’s success was that it proceeded peacefully and its supporters seemed to hope that it would set a standard for the next four years. The new administration has already been rocked by nationwide and international protests, not once but twice, in its first ten days. It seems all too likely that the trend will continue. But should that be the way we categorize protesters? Into easy groups—peaceful and not, worthy of our respect and not?

A tweet from NBC Washington noting that not a single protester was arrested at the Women’s March on Washington received close to ten thousand retweets. Portland police tweeted, “Thank you to everyone who came for #womensmarchpdx today in what was easily one of the largest marches ever in Portland. 100% peaceful.” A post on the TwoXChromosomes subreddit, “Biggest protest in U.S. history was peaceful, non-violent, positive” has surpassed 44,000 upvotes, coming in at fourth for the top posts of 2017. Photos of law enforcement officials wearing the iconic pink beanies, high-fiving protestors spread like wildfires, signaling a solidarity that marks a sharp about face from other images of the police that we’ve seen in recent years. Barely implicit in these and the thousands of other self-congratulatory posts was a message, loud and clear: Unlike those other protests, we were peaceful.

That’s all fine, and probably, in the moment, a tactical attempt to get ahead of the likely pushback narrative from conservative-friendly media outlets and social media, that they were “riots.”  But, pay attention to the strategic risk of that tactical move.

Given our justice system, an institution built on institutionalized racism, a peaceful protest is not typically about the actions of the protestors, but about what they’re protesting, how much the system feels it has to lose.

Recent experience has taught us this lesson again and again. We learned it in Ferguson, when, for the first time, Amnesty International was deployed within the United States to observe police response to protestors (finding evidence of human rights concerns in the process). We learned it in Baton Rouge, when in the aftermath of the shooting of Alton Sterling, a photo of an unarmed 28-year-old Ieshia Evans being swarmed by police in riot gear took the country by storm. We learned it when protestors in Seattle and Los Angeles organized against President Trump’s visa restriction face-offed against police. And we should have learned it decades ago in Selma, when protestors were met with the force of Alabama state troopers and an officer fractured Rep. John Lewis’ skull with a baton.

Lewis’ story is an important one, not least of all because we still seem unable to conceptualize what exactly Lewis meant when he coined the mischievous phrase, “good trouble,” even 50 years later. Good trouble entails civil disobedience—and civil disobedience entails disobeying the laws. It means shutting down highways and Black Friday sales, because the general public and policymakers refuse to pay attention until they are inconvenienced. It means disrupting presidential candidates because they have yet to include you in their platform, but will overwhelmingly rely on your vote to win. Sometimes it even means getting arrested because apartheid was legal and the Holocaust was legal and segregation was legal.

Legal does not mean just. Unsurprisingly, then, struggling for justice isn’t always peaceful. Take, for example the recent protests mobilized against President Trump’s immigrant ban from seven Muslim-majority countries. As they had the weekend before at the Women’s March demonstrations most of the demonstrators carried only colorful handmade signs and flags—and yet in Seattle, protestors were pepper-sprayed and in Los Angeles they were forced to face-off against police.

Civil disobedience is too often met with police officers in riot gear, officers armed with weapons of war because those in power have something to lose. And as history has shown us, civil disobedience is also met with widespread disapproval from the majority of Americans, from the segregationists to the good-hearted liberal who just wants to get to work. A few months before the first March on Washington Martin Luther King Jr., who is so often quoted around this time of the year, had almost reached the regrettable conclusion that the great stumbling block in the road towards freedom was not the Ku Klux Klan or George Wallace but the white moderate, “who is more devoted to ‘order’ than to justice; who prefers a negative peace which is the absence of tension to a positive peace which is the presence of justice; who constantly says: ‘I agree with you in the goal you seek, but I cannot agree with your methods of direct action’; who paternalistically believes he can set the timetable for another man's freedom; who lives by a mythical concept of time and who constantly advises the Negro to wait for a ‘more convenient season.’”

In an almost universal amnesia, America seems to have forgotten that at the height of the civil rights movement, majority of the country did not support or even approve of the tactics employed by its activists. In fact, most of America seemed to think that shutting down highways, inconveniencing civilians and other demonstrations (including marches) would hurt black American’s chances of integration into the South. It would be funny if it wasn’t so disturbing how similar that sounds to the mass disapproval the United States holds for the tactics employed by Black Lives Matter activists. And in a terrifying indictment of our education system, many Americans also seem to believe “rowdy protests” are fundamentally un-American and that our country was founded on calm and reasoned discourse rather than a long and bloody revolution.

Over the next four years, we should be attuned to this history. As Vann R. Newkirk II wrote in a prescient piece for The Atlantic, “civility is not the highest moral imperative.” When celebrities like Kristen Bell tweet to their millions of followers “angry & violent protestors accomplish nothing,” we should ask ourselves who really profits from narratives of peaceful protests and who is vilified for their anger. Calm and reasoned arguments alone aren’t going to sway those in power, especially if our situation really is as perilous as it seems to be.

We know this much: Civil disobedience works. Decades of history prove that truth. The eight states in the country attempting to criminalize protest prove that. The Black Lives Matter protests that produced Department of Justice investigations—which in turn provided evidence of systematic police misconduct in Chicago, Ferguson, Cleveland and Baltimore—proved that. To use peacefulness and respectability as measures of a demonstration’s validity creates a mismatch when the demonstrator is met with a pointed gun and felony charges.