A Tribute to Ted Halstead 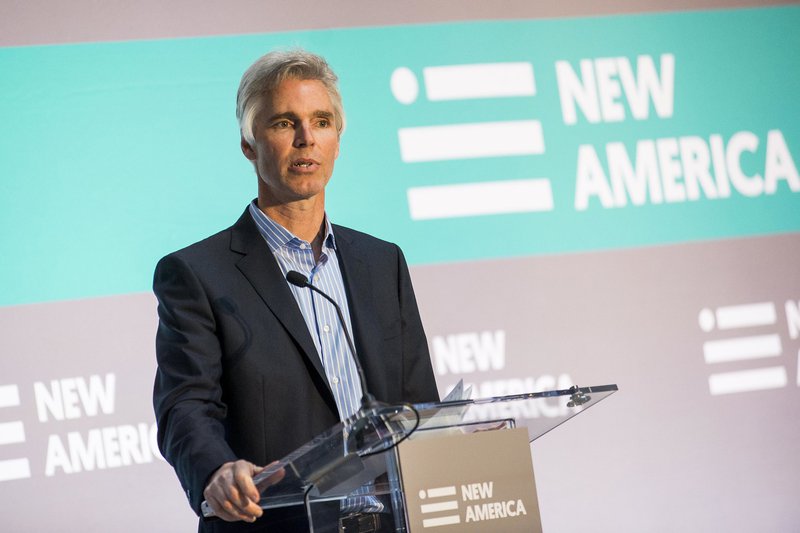 It was with great sadness that we learned of the passing of Ted Halstead. Ted was a true visionary, and New America exists because of his vision. In 1999, Ted, together with Walter Russell Mead, Michael Lind, and Sherle Schwenninger, founded the New America Foundation (now New America) to nurture a new generation of public intellectuals and develop a set of innovative policies that would push past orthodoxies on the right and the left. Ted served as New America’s first president. During this time, Ted co-authored The Radical Center: The Future of American Politics with Lind, establishing New America as a home for big, bold ideas.

After eight years of leading New America, Ted stepped away to sail around the world with his wife, even though he did not know how to sail. It was typical of him, to take on an audacious endeavor without knowing quite how he would do it but with the confidence, determination, and creativity to get it done. He lived life as richly as he could, embracing innovation and adventure.

When Ted returned to public life, he was focused not just on the future of America but the future of the planet. He founded the Climate Leadership Council, building a bipartisan coalition to tackle one of the major crises of our time. He took a big idea, a carbon tax that would return social dividends to all citizens, and figured out how to operationalize it and build a coalition behind it.

Ted was a leader and an extraordinary entrepreneur. We are grateful for his insights, his strategy, his guidance, his willingness to experiment, and so much more. We will miss him. All of New America extends our deepest condolences to his family and friends.

He has died far too young. But he leaves a legacy that many would envy at twice his age.

"Successful entrepreneurs, founders, visionaries, leaders—they have a certain personality that is different from the rest of us. They talk big, they dream big, they promise big, and the best get others to believe along with them. Ted Halstead was one of the best."
- Read the rest of the tribute in The Atlantic.

"What drew me to Ted from the beginning was his blend of entrepreneurial flair and political originality. He had an instinct for turning ideas into institutions, not to mention a mix of determination and charm that could raise the money to support his dreams. Beyond that, twenty-five years ago he already understood some very important things about America that are very much at the heart of what troubles us today. Ted knew that there are good ideas and good people on both the left and the right in American political and cultural life, but that neither the left nor the right alone had the wisdom or the vision that the country needed to flourish in tumultuous times. Ted dedicated his professional career to the search for practical ideas that could move the debate and the country ahead, and the good will, the earnestness and the optimism that he brought to this quest never ceased to move and inspire me. Those of us fortunate enough to have seen his sunny spirit and indomitable will at work will never forget him. It was an honor to know him, and a joy to work at his side."

"In chemistry, a catalyst is a substance which, while retaining its identity, causes other substances to interact in dynamic ways that would not occur in the catalyst’s absence.  Ted was a living catalyst.

He brought together brilliant and dedicated people from different backgrounds, political parties and places on the ideological spectrum to work together on some of the greatest challenges to the country and the world.  Sometimes the experiment fizzled.  Sometimes a chain reaction lit up minds and illuminated the landscape of public debate.

In addition to catalyzing new combinations, Ted brought out the best in the individuals he gathered around him, with the example of his own inexhaustible enthusiasm.  “Politics is the slow drilling of hard boards,” Max Weber observed.  It is easy after a while to forget why you started drilling a particular board.  Ted reminded those of us lucky enough to take part in the successive communities he created  why we were in the business of public policy.  It was to remake America and save the world and have some fun and make friends along the way.

Rest in peace, my friend.

What saddens me most about the tragic death of our friend and colleague, Ted Halstead, is the part of the future we have all lost.  Ted had an almost unstoppable drive to create publicly minded institutions whose mission it was to offer solutions to the big problems of the world.  He also had an almost unimaginable set of talents to succeed where most of us would fail.  New America is part of his legacy.  The Climate Leadership Council, which he went on to found in 2017, is another.  Some of Ted will live on in these institutions and in all of us who worked with him.  But Ted was only 52 when he passed.  Even if it took him another year or two to complete the mission of the Climate Leadership Council, he would have had many more years to create yet another New America or yet another Climate Leadership Council.  I don’t know exactly what it would have been.  But I do know it would have been something truly important for the world.  Such was our friend and colleague, Ted Halstead.  Such is our loss.

"In 1999 Ted Halstead founded New America—then the New America Foundation—when he was only thirty. Ted was always brilliant about making deals and getting things done and he secured for New America’s first offices the top floor of 1630 Connecticut Avenue N.W., just north of Dupont Circle.

New America was quite small in its first couple of years; maybe a couple of dozen staff and fellows. Ted’s large, immaculate office looked down Connecticut Avenue south towards the Circle and there was also a large conference room so that the organization could hold events like a proper, grown-up think tank. New America felt kind of scrappy and young like a late 1990s-era dotcom start-up, but Ted was a little different than most early New Americans. Ted was always perfectly dressed in immaculately tailored dark blue suits paired with a well-pressed white shirt, but never a tie. Ted exuded total self-confidence and, with his prematurely graying hair, he seemed considerably older than his actual age.

Ted’s obvious smarts and brimming confidence enabled him to find donors for his fledgling think tank and to recruit some really smart, well-connected thinkers and doers to serve on New America’s board, such as our first chairman Jim Fallows and other early board members Fareed Zakaria and Anne-Marie Slaughter. There was even this relatively recent start-up named Google and its CEO Eric Schmidt that also joined the board early on.

A couple of years after the 9/11 attacks, board member Kati Marton hosted a New America dinner for some of the wealthiest people in the country together with her husband, Richard Holbrooke at their spacious apartment on Manhattan’s Central Park West. After that dinner, Ted secured a very large annual gift from Bernard Schwartz, the CEO of Loral, which was instrumental in helping to build New America’s talent pool over the course of many years.

Ted, along with his co-founders Mike Lind, Sherle Schwenninger, Walter Russell Mead and another early leader of New America, Steve Clemons, had a vision for the kind of organization that they hoped to build that seems quite quaint now given the intense level of political polarization in the country, which was to generate “big ideas” that were “beyond left and right;” to inhabit “the radical center;” to be a home for the “ideologically homeless,” and not to simply be a “government-in-waiting.”

As a result, in its early years New America helped to incubate some of the smartest thinkers and writers in the nation, often when they were at the beginning of their careers, such as, to name just a few, Jacob Hacker, Noah Feldman, Kate Boo, Chris Hayes, James Forman Jr., Lisa Margonelli,

Nick Thompson, Shannon Brownlee, Afshin Molavi, Eliza Griswold, and Reihan Salam. It was also a place that produced key policymakers such as Ambassador Karen Kornbluh who was one of the first to go work in the U.S. Senate for a then-largely unknown junior senator from Illinois. Ted also brought on policy entrepreneurs such as Maya MacGuineas who eventually spun off her own think tank from New America, the Committee for a Responsible Federal Budget, and Ted invested in “big ideas” such as the health policy program run by Len Nichols that provided a good deal of the thinking behind what eventually became Obamacare.

Ted was always on the move. After almost a decade running New America, and when the organization had many dozens of employees and a $10 million yearly budget, Ted handed the reins over to Steve Coll and then went on a five-year sailing trip around the globe with his then-girlfriend, Véronique Bardach. Five years on a boat together will surely sort out if your relationship is going to work, and Véronique and Ted married and started a family when they settled in Spain several years ago. Ted then launched another think tank, the Climate Leadership Council, a bipartisan effort to help tackle climate change.

Earlier this month Ted died in a hiking accident aged 52, leaving the world far too early.

The architect Sir Christopher Wren is buried in St. Paul’s Cathedral in London, the building that he designed. On Wren’s tomb it reads “Reader, if you seek his monument, look around you.” If you seek Ted’s monument, look around at your colleagues at New America and also at the many talented people and influential ideas that New America has launched into the world over the past two decades."

"The passing of Ted Halstead at far too early an age—52—has left me in shock. Ted, who died in a hiking accident last week, was likely the top public policy entrepreneur of his generation and a one-of-a-kind thinker in every respect. Even as I and the rest of R Street mourn his passing, I know that his legacy as founder of New America and the Climate Leadership Council (CLC) will certainly endure."
- From R Street's statement on Ted Halstead