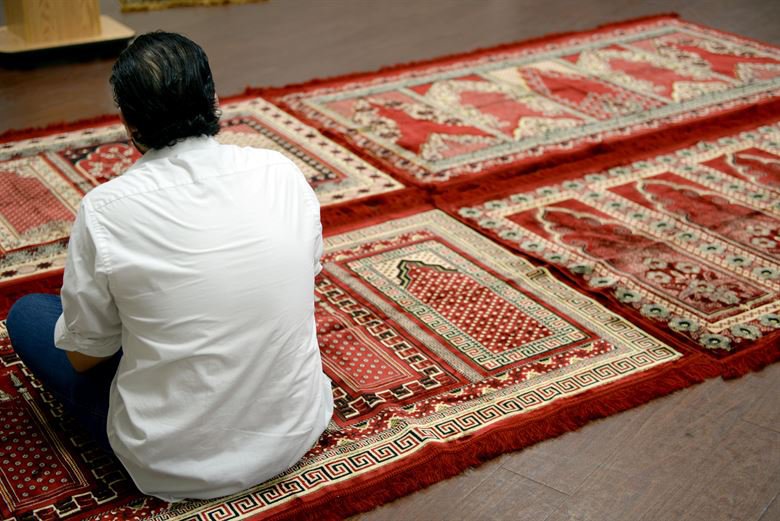 New America-IUPUI Public Problem-Solving scholar Rafia Khader brings us the second in a series of pieces exploring the concept of "third spaces" and how faith traditions call communities to connect in new ways.

When the mosques first started to close in March due to COVID-19, the reaction from the American Muslim community was ambivalent.

Zahra Ayubi, Assistant Professor of Religion at Dartmouth, tweeted: “Men crying that they can’t pray at a mosque: pray at home, men! What? What’s that you say? You miss feeling community? You don’t feel like you’re part of “the ummah”?? You feel robbed of greater spiritual purpose?? That’s your male privilege being put on hold. Temporarily.”

A woman who goes by the alias, “Biker Niqabi,” expressing a similar sentiment, tweeted the following “hypothetical” dialogue:

“Men: as a Muslim in a non-Muslim country, I’m worried my Iman will be weakened without regular access to the mosque, and the halaqahs and classes I can attend with my Muslim friends

The fact that a feminist professor of Islam and a proud (motorbike-driving!) niqabi both feel similarly on the topic of women and the mosque is deeply telling of just how alienating many mosques in the United States can be for Muslim women.

But women aren’t the only group of Muslims who have felt this sense of evenhandedness and perhaps even an unspoken sense of relief, if we can call it that, due to the mosque closures.

Shariq Siddiqui, the Director of the Muslim Philanthropy Initiative and Assistant Professor at the Indiana University Lilly Family School of Philanthropy at IUPUI, considers himself an “unmosqued” Muslim. He described to me the joy that he now feels in his practice of Islam for the first time in perhaps a very long time. His worship can legitimately go beyond the ritualism he experiences at his local mosque.

The phenomenon of the “unmosqued” Muslim, a term first popularized by the 2014 documentary of the same name, is an understudied topic, though it has elicited plenty of responses from the Muslim community online. The term therefore has an ambiguous meaning. Unlike unchurched Christians, unmosqued Muslims fall under a spectrum due to the obligatory nature of prayer, both in a general sense and particularly as it pertains to the jumu’ah (Friday) prayer. There are people like Shariq who only go to the mosque to attend the weekly Friday prayer, which is required of all adult men. Then there are practicing Muslim women who never go to the mosque, as jumu’ah prayer is not required of women. Then there are Muslims, both men and women, who are either “mosqued” or “unmosqued,” depending on what mosque they happen to have attended that day.

As Shariq tells me, being unmosqued has become “in” during this crisis, since everybody is unmosqued now due to COVID-19. In his eight-member household, he and his children take turns delivering the Friday khutbah (sermon) each week. Every night, his 11-year old son leads the late-night tarawih prayer. He’s participating in online halaqas (religious discussions) and poetry readings. Prior to COVID-19, no one was conducting jumu’ah prayer services in their home. While it was usually acceptable for women to pray tarawih at home on their own, it was generally looked down upon for men to not pray in congregation in the mosque.

“In the past, the things I wanted to do was frowned upon because it didn't take place within the confines of a mosque or religious institution and therefore was looked down upon. [All these things are] now being seen as legally acceptable,” Shariq says.

While the legal permissibility of performing jumu’ah at home is up for debate, according to Shariq, the religious leaders and scholars who say it is not permissible is because they may be partly worried that if we start a tradition of praying jumu’ah and tarawih at home, people might stop coming to the mosque all together after they re-open.

“If we start doing this, we may find that the one thing that many mosques currently offer – this ritual religious practice, this institutional form of practice -- we can do in other places. In my mind, all across America, all across the world, but definitely across America, our homes have become third spaces. And my sense is then when we come out of this, we're going to have some tough questions to ask. Are mosques or Islamic centers offering enough services for the investment of infrastructure and budget? I think [mosques are] going to have to innovate beyond that.”

Mosques are being pushed into this space, Shariq tells me. When I press him on what exactly that space is, he responds, “Mosques will be pushed to provide the kinds of spiritual and inclusive support that has driven us to third spaces [in the first place], driven us to be ‘unmosqued’. My hope is that out of this great challenge, the innovation that will inevitably result will continue. It needs to continue. ”

If the mosque is simply a place to offer prayer, which is something that can be done at home and has been done at home by all Muslims since early March, COVID-19 will serve as a type of reckoning. Muslims who are finding that they are able to practice a more fulfilling and spiritual ritual worship at home may question the relevancy of their local mosque once it re-opens.

Shariq says, “As an unmosqued person, I’m having the time of my life. Everyone in my family, the rest whom are not unmosqued, is practicing in a way that we find more fulfilling, more engaging, and the khutbahs are more relevant. If there is some disagreement, someone will speak up after the khutbah and a meaningful discussion will ensue. This does not happen in mosques. In many ways, if you think of the time of the Prophet (peace be upon him) the entire congregation had the right to speak, and that happens in this setting. The kids feel comfortable to say things that are on their mind, the things they wrestle with, safely.”

While Shariq’s experience during the past two months points to many opportunities in creating more welcoming and inclusive Muslim spaces in Indianapolis in the wake of COVID-19, there are plenty of challenges the city faces.

Faryal Khatri, a native of Indianapolis and the former Communications Coordinator at the Islamic Society of North America headquartered in Plainfield, moved to Dallas just two weeks before the lockdown. The change in terms of her religious and spiritual experiences has been drastic. At the Valley Ranch mosque she is a member of, they have a dedicated women’s program on Wednesdays that is led by the imam. It is a rarity for the imam to lead any sort of women’s programming. This demonstrates how vital women are to the Valley Ranch Muslim community. Faryal is also a part of the women’s support group at the mosque, which is led by a Muslim therapist who is also a member of the congregation. To her knowledge (and to my own), Indianapolis does not have any program like this.

A big part of the reason why she moved from Indianapolis in the first place is because she felt a void in her spiritual growth. As someone who moved to Indianapolis four years ago from Chicago where I was finally able to find a spiritual home just prior to moving, I have felt this same void (it is a big reason why I am taking on this research agenda). For Faryal, moving to Dallas was all about spirituality, knowledge-seeking, and having access to formally trained Islamic scholars, like Shaykh Yaser Birjas and Shaykh Omar Suleiman.

Yet, Faryal does see hope for Indy’s future. Indianapolis is small, but it is growing. As she says, what Indy is experiencing right now may just be growing pains.

Imam Ahmed Alamine, who became the Imam of Majid al-Fajr two years ago, is formally trained in the Islamic sciences and has sought to focus his attention on the youth in the community. He has also made himself accessible to every Muslim he meets. Not to mention the fact that he is a Chaplain for the Indianapolis Metropolitan Police Department and sits on the Board of the Center for Interfaith Cooperation. In response to COVID-19, he set up the volunteer-led Muslim Task Force. On the front lines of the relief effort, he himself has contracted COVID-19. I join the rest of the Indy Muslim community in praying that he recovers fully and swiftly.

I remember when I first met Imam Ahmed in person about a year and a half ago. He introduced himself to me, gave me his card, and encouraged me to join a WhatsApp group that was basically a forum for anyone in the community to ask him questions pertaining to fiqh (Islamic jurisprudence). I thought then as I continue to do so now, “He’s different. We need more imams like him.” As I have come to learn more in the past few months of how he and Board President Dr. Halima al-Khattab have worked to transform al-Fajr in the past two years, I look forward to attending and learning from this community when normal operations resume.

Just a few months ago, the Al-Huda mosque in Fishers hired Dr. Nasser Karimian, who Faryal tells me is formally trained from Qalam Seminary in Dallas, a nationally recognized Muslim scholar, and after I did my own searching, studied Religion and Classical Arabic at Concordia University and has a PhD from the International Islamic University of Malaysia in Usul al-Din and Comparative Religion. Naturally, that last part intrigues me the most.

This is all a very welcoming development. Whether this growth in Indianapolis results in instituted third spaces like Mohammed Webb Foundation in Chicago or Roots in Dallas remains to be seen. To be completely honest, on a personal level, I am less interested in whether third spaces took root. My ultimate aim is to see mosques being welcoming and uplifting to all who enter its doors, as it was in the time of the Prophet Muhammad (peace be upon him). Third spaces would not need to exist, in my opinion, if mosques were doing a better job at this. Maybe Indianapolis does not need the liminality of the third space. After this current crisis is over, we will see what happens in either case.

Rafia Khader is a scholar in the New America - IUPUI Public Problem-Solving Partnership. Her work focuses on examining contemporary Muslim spaces and exploring how committed Muslims create spiritual bonds and communities in and outside of the mosque.