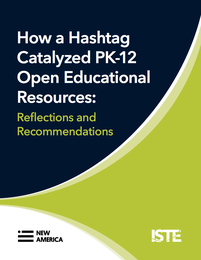 In recent years, many PK-12 school districts across the United States have chosen to use open educational resources (OER) to improve student learning. OER are “teaching, learning and research resources that reside in the public domain or have been released under a license that permits their use, modification and sharing with others. [OER] may be full online courses or digital textbooks or more granular resources such as images, videos and assessment items.” Investments in OER enable school districts to reallocate significant funds from proprietary learning materials to resources and activities that accelerate the transition to digital learning, including professional learning programs for teachers, a robust technology infrastructure, and new leadership roles for educators who create or curate OER. However, the positive aspects of OER are not limited to cost savings. In OER-using districts, students can have more personalized learning opportunities, and teachers can benefit from flexibility to design and implement learning experiences that traditional learning materials cannot always support.

The United States Department of Education (ED) recognized the need to support school districts transitioning to OER through a coordinated national initiative. As the idea took shape, it was determined that the movement would be branded as “#GoOpen,” have a high-profile kickoff that included aspirational commitments from districts and partner organizations, and showcase known proof points about how some districts already implemented and scaled OER.

Three years later, #GoOpen has been called “a hashtag that launched a movement.” It gained momentum due to a groundswell of OER champions in over 100 school districts and 20 states, as well as support from nonprofits, foundations and private sector companies. In the three years since its inception, the movement achieved three major accomplishments, all of which would have been much more challenging without #GoOpen’s broad network of expertise.

The U.S. public education system is an immense network composed of 98,200 schools in 13,600 districts. Without a central convener, districts innovating with OER and many others would only have access to limited expertise in addressing their questions. #GoOpen, acting as that central convener, provided an environment where the districts could instead come together for a collaborative dialogue around OER.

The 2016 and 2017 #GoOpen Exchanges and their subsequent phone calls and Slack channel, hosted by OET, provided an initial forum where best OER adoption practices could be identified and amplified. Moreover, #GoOpen provided several means for districts to continue the OER discourse independent of the federal government. For example, the #GoOpen District Launch Packet greatly empowered novice districts, such as Carlsbad Unified School District, by demonstrating how #GoOpen Districts can begin their transition. The Regional Summit in a Box toolkit, used by OER champions in Tullahoma City Schools and Lewis Central Community School District, among others, encouraged districts to meet more frequently than the annual #GoOpen Exchange. National organizations such as SETDA, which housed the launch packet and toolkit on its Guide to Quality Instructional Materials page, further propagated these resources.

3. #GoOpen reset the framing for how schools and districts should approach OER.

Before #GoOpen, OER adoption simply meant that a teacher independently searched for digital, openly licensed resources that he or she could remix and incorporate into daily lesson plans. The #GoOpen District Launch Packet instead pushed educators to think about OER in a much more comprehensive and systematic manner, involving district and school leaders who set timely goals, organized diverse teams, determined the necessary infrastructure, ensured material quality and designed related professional learning. For each of these five phases of OER transition, the launch packet also shared concrete resources that districts new to OER could adopt for their own purposes. For example, in phase 2 (“Selecting and Organizing a Team”), the packet provided Coronado Unified School District’s outline of personnel and responsibilities in a well-functioning OER team. For phase 4 (“Ensure Quality”), the packet included Lawrence Public Schools’ OER quality assessment rubric.