Why 14 States Are Choosing to #GoOpen 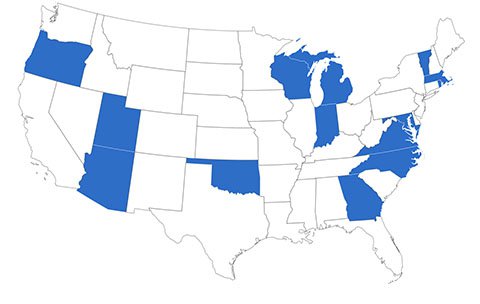 Leaders from 14 states and 40 school districts gathered at Skywalker Ranch in Marin County, California, last Friday to announce their support for using high-quality, openly educational resources in classrooms—a step that brings public education closer to realizing the full potential of using, sharing, and improving upon educational materials to meet the needs of all learners.

Gathered at a daylong summit hosted by the U.S. Department of Education, aptly titled the #GoOpen Exchange, these state and district leaders committed to “go open” and support schools as they transition to using high-quality, open educational resources—also known as OER—in their classrooms. Joined by education technology companies and nonprofit organizations committed to the effort, the meeting represented a real exchange of ideas, with a shared goal of bringing OER to scale.

But why turn to OER? Those three letters signify a whole array of resources—including things like lesson plans, worksheets, and videos, but also increasingly textbooks and full course materials—that are free for the public to use, share, and improve upon. The ability to modify these kinds of materials provides states, districts, and teachers with the unprecedented opportunity to (legally) adapt and share resources that both reflect their higher academic standards, and also fully tap into the technological capabilities of an increasingly large portion of today’s classrooms.

Not that long ago, this may have seemed more like science fiction than reality. Before the Internet, proprietary textbooks were the primary (often the only) educational resource relied upon in classrooms for instruction, given the cost-prohibitive nature of publishing and distributing information. This environment allowed textbook producers to thrive, and restrictive copyright permissions—which legally inhibited textbook owners from changing, modifying, or reproducing their materials, questions of “fair use” aside—kept schools on the hook for purchasing each new edition, pushed out regularly on multiyear cycles.

Speaking to those education leaders present last week, Joseph South, director of the Office of Educational Technology at the U.S. Department of Education, framed the daylong conversation by emphasizing just how out of sync this approach to procuring resources is with where schools are at today. He said, “The goals that we have for our schools, for our students, are changing. The approaches that we’re taking to teach our students are changing. Our infrastructure is changing. But,” he cautioned, “our resources are not keeping pace.”

As South pointed out, as district infrastructure changes and more schools continue to get online, information is flooding into classrooms and is available at a student’s fingertips. Widespread adoption of the Internet has rapidly broken down the cost of publishing and distributing information. And while traditional textbook publishers have scrambled to erect paywalls and access codes to maintain control over their resources, many educators have begun to question the value of what they are selling.

I really don’t believe that this kind of information, at this level, is proprietary anymore.

“We know that what we’re getting is outmoded, unchanging, and once the deal is inked it’s locked in for years to come,” said Sean Nash, district online learning coordinator at North Kansas City School District, of the proprietary textbooks they had been buying year after year. He said, “I really don’t believe that this kind of information, at this level, is proprietary anymore.” Instead, Nash described his district’s decision to co-create instructional materials, leveraging the expertise of teachers to create content that is more dynamic and responsive to their needs. “Already,” he said, “we feel that this is a more sustainable, systemic system than we’ve ever had.”

Cara Bosler, a sixth grade science teacher in the district, agreed. “I’ve seen firsthand how this has changed teaching and learning,” said Bosler. “We as teachers feel more respected and empowered. We’re able to dig deeper into our standards and ask, what are the big pieces of learning?”

From a student perspective, it’s definitely brought about changes as well. “They’re actually allowed to write—heaven forbid—on their materials,” she joked. But more than that, she said, students can see their resources changing with the world around them: “It’s helped students live the lives of scientists.”

North Kansas City School District is one of nine #GoOpen Ambassador Districts that are already well on their way to implementing OER districtwide. In addition to their sharing their own work, each has committed to mentoring others from the 31 national “Launch Districts” as they begin to determine their strategy to replace traditional materials with OER. For their part, the Launch Districts have committed to, at minimum, replace at least one textbook with OER over the course of the next year, as well as document and plan their implementation process to share with others. Akin to Pay It Forward, districts now launching their efforts will hopefully then serve as ambassadors to other districts looking to #GoOpen.

At the state level, Utah has been leading on OER for years. Alan Griffin, curriculum content specialist with the Utah State Office of Education, emphasized the state has been supporting the development of math, English, and science resources since 2012. Along with this statewide strategy for developing OER, Utah and the 13 other #GoOpen states have committed to developing a statewide repository for sharing resources as well as publish their OER to the Learning Registry, share their progress publicly online, and collaborate with other #GoOpen states and districts to share their work. “We have communication continually with districts using OER,” he said.

As states and districts move forward with their planning and implementation, there is enormous potential for collaboration and shared learning—after all, that is the promise of “open.”

“States and districts are leading the way in innovation in a number of areas,” said John King, acting secretary of education for the U.S. Department of Education, videoconferencing in from DC on Friday afternoon, “and #GoOpen is just one of those.” Over 20 million additional students are connected to high-speed broadband in schools since 2013. In that time, more than 2,000 superintendents signed on to the Department’s Future Ready pledge to support personalized learning. If the movement to #GoOpen builds similar momentum, our educational resources will indeed begin to keep pace."