Next Gen is Now--but is the Department ready? 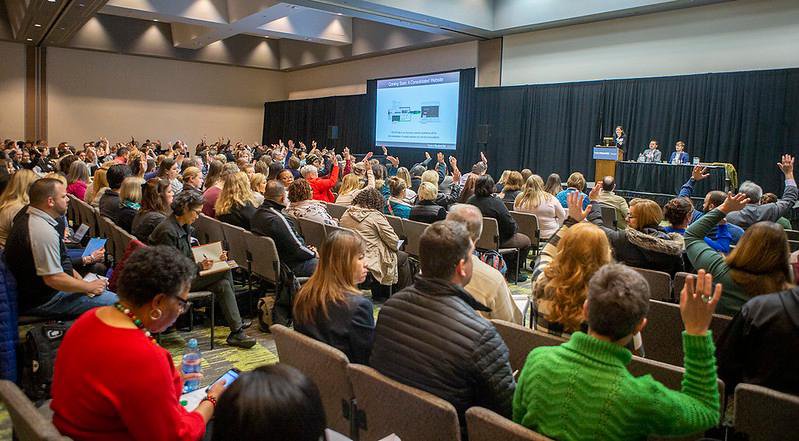 For many industries, it’s only a matter of time before technology steps in to disrupt their work, if it hasn’t done so already. At the Federal Student Aid (FSA) training conference earlier this month at Reno, it’s clear that financial aid’s turn has finally come. From applying for financial aid to repaying student loans, technological intervention is tangible at the Department of Education (ED).

The FSA training conference is the largest training conference annually held by the Department for the financial aid community. Over the course of a week, financial aid professionals can hear from ED representatives about federal regulatory and executive updates, ask questions and raise concerns about operational issues, swap stories and network with professionals like themselves, and of course, give criticism or kudos directly to Department staff.

But the real hit of the conference this year, aside from the usual sessions on operating and administering the federal aid programs, was the update on the long-awaited Next Gen Federal Student Aid, a Department initiative that aims to revamp how students and borrowers interact with financial aid systems.

The initiative was announced two years ago, but only at the conference did it finally become clearer how Next Gen has taken shape. The most important product of Next Gen is StudentAid.gov, a single website that consolidates student aid resources and data from four other sources: studentaid.ed.gov, a website for students, parents, and borrowers to access information about different financial aid programs, fsaid.ed.gov, where applicants create their FSA accounts, studentloans.gov, where they can manage their loan and repayment, and nslds.ed.gov, the financial financial aid database, where students can access information about their loan debt. With this one-stop website, students, parents and borrowers can manage all aspects of their experience with federal financial aid, from applying, to tracking, and repaying their loans.

The website will be personalized to accommodate applicants, students, parents, and borrowers. For students and parents, they can use the Informed Borrower Tools (or IBT, as the Department staff called it--yes, another acronym) on the website to educate themselves on different financial aid options available. The IBT will also incorporate institutional outcomes data from the College Scorecard so that students can explore and compare the outcomes of colleges to which they’re interested in applying. For borrowers, changes made on StudentAid.gov will be even more significant. Borrowers will ultimately be able to go to just one website, track their repayment progress, and make repayments for all of their federal student loans they have. The website also offers a Loan Simulator tool to help borrowers decide which repayment plan will best fit their needs.

If the one-stop website sounds too self-directed, don’t worry: StudentAid.org has that covered, too! An “onsite” support system is underway, which aims to give students assistance as promptly and correctly as possible. "Aidan", the virtual assistant, which will be piloted among a small subset of users next year, will be available 24/7 to answer any questions about federal student aid, and help with tasks such as making payments or contacting a servicer. If students don’t want to interact with a machine, they can dial the single toll-free number 1-800-4-FED-AID to talk with a human representative who has access to their contact records and loan history.

And it’s hard not to get excited. A single platform like the one Next Gen will build has been a long time coming. The idea was initiated in 2014, under the Obama administration, only to be cancelled a few years later at the start of the Trump administration. But it was reintroduced in 2017, labeled as Next Gen and bearing many resemblances to the plan proposed under Obama.

Excited as people in the audience were, though, it didn’t take long to realize how audacious this undertaking would be. An one-stop platform that provides multiple services, on top of an enormous system tracking borrowers’ payment history, requires a sizeable amount of operational work, not to mention seamless cooperation across a lot of stakeholders (from FSA to its contractors, and thousands of institutions) during the process. Some in the audience raised questions about how the timeline of the rollout would align with the timeline on which their colleges administered aid for students. They also showed concern about whether the data would be updated in real-time, allowing students to see the payments they’ve made posted immediately and to access other, correct information about their financial aid statuses.

Transitioning into a single platform for student loan repayment also means that the relationship between borrowers and servicers will become increasingly invisible -- greatly reducing the complexity of servicers that each bring their own branding, or loans moved from one servicer to another. Since students will be able to deal with all aspects of their loan repayment through just one FSA’s website, FSA will clearly be the “servicer” from the students’ view, cutting down on confusion from borrowers. As Colleen Campell, the former director of postsecondary education at the Center for American Progress and now working at FSA on Next Gen, put in a blog: “If things go well, however, NextGen could help bolster students’ faith in the federal student aid system.” But this promise requires the system to function well for students, placing added pressure for the platform to work without a hitch, and for FSA to hold servicers accountable when they fall short.

Is FSA ready for such a challenge?

The earliest that StudentAid.org will go live is this winter (a wide timeframe, as some audience members noted), due to security testing. But students still need to wait until at least the middle of next year for the full experience. Until then (and most likely a few years later), we hope to see FSA keep up with the long list of work they need to do to ensure the system works smoothly.