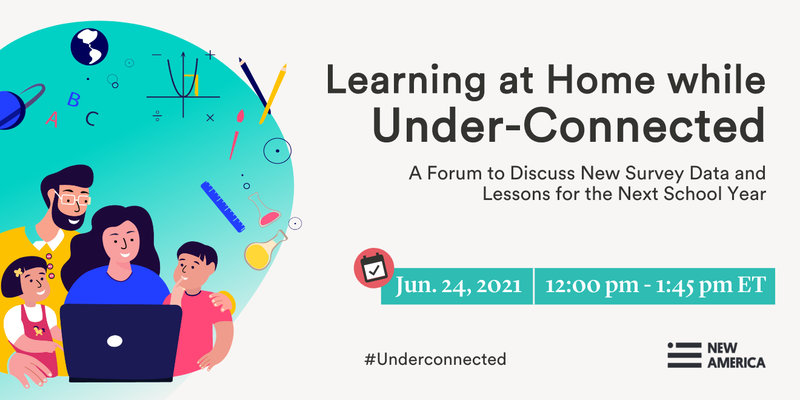 Two key themes emerged from New America’s virtual forum on June 24th. First, too many lower-income families are under-connected, unable to get adequate, reliable internet service, and lacking the up-to-date devices and applications needed to help their kids in school. Second and perhaps even more important: These families greatly value and need connectivity of the non-digital kind as well. Local support from neighborhood organizations and schools was vital to them during the pandemic and continues to be so.

The event, which featured remarks by Jessica Rosenworcel, acting chairwoman of the Federal Communications Commission, marked the release of results from a national phone survey of more than 1,000 parents of lower-income families with children ages 3-13. Among the many key findings for educators and policymakers, the state of being under-connected came through loud and clear. In fact, this may be the heartbreaking story of remote learning during the pandemic—and potentially of the years to come, if efforts aren’t made to address the problem. 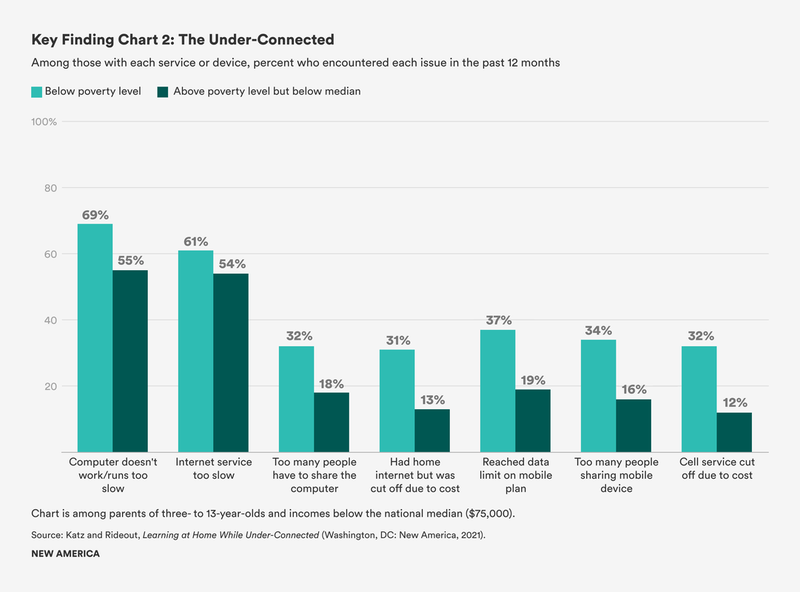 As you see in the chart above, the majority of parents in the survey said that their computer was too slow and the internet was too slow. As many as 69 percent of parents at or below the poverty level were experiencing broken computers or slowdowns. Sizeable percentages had their service cut off or reached the data limit on their mobile plan. Other data in the survey shows that their children experienced major disruptions to their learning as a result.

The report, Learning at Home While Under-Connected: Lower-Income Families During the COVID-19 Pandemic, was written by and based on research by Vikki Katz, associate professor at Rutgers University, and Victoria Rideout, president of VJR Consulting. It was accompanied by three community briefs from Detroit, Pittsburgh, and Santa Clara County, drawn from group discussions with parents led by Laura Zimmermann, consulting for New America. (We’ve collected all four reports and the event page together here.)

At the New America event, acting FCC Chairwoman Rosenworcel called for increased efforts to close what she calls the “homework gap”—and which speakers at the event expanded to call the “learning gap.” Rosenworcel also highlighted the opening of the Emergency Connectivity Fund, a $7.17 billion program made possible by Congress’s passage of the American Rescue Plan. Applications from schools and libraries will be accepted starting June 29th.

Thanks @NewAmericaEd for allowing me to discuss how the #COVID19 pandemic has shed more light on the #underconnected and how closing the #HomeworkGap is a top @FCC priority to end the digital divide. https://t.co/MUlMKDsvMZ

Other speakers included Sam Liccardo, the mayor of San Jose, and Christopher Rush, senior advisor for innovation & director of educational technology at the U.S. Department of Education. A video developed by Makeda Mays Green of Nickelodeon provided voices and experiences of parents and kids. A panel focused on families and the support of local organizations highlighted another survey, published by Abriendo Puertas last year, that foreshadows many of the same difficulties captured in the just-released data. And Janice Myers, a Pittsburgh grandparent taking care of four grandchildren, captivated the audience with stories of hassles and determination; she had to figure out, for example, how to get multiple devices to work for her kids, which required seven bus rides back and forth to their school for tech troubleshooting.

Love hearing the story from this grandparent in Pittsburgh:

"The school gave the kids computers, but they didn’t have the capacity for all of the students to log on at the same time... Your whole household changes, and suddenly we became educators." #underconnected pic.twitter.com/LUaWLuuisd

The event ended with calls to action. The report itself provides three conclusions and recommendations from the report: 1) Make the under-connected a priority. 2) Build on the relationships of parents and educators working together during the pandemic. And 3) Blend formal and informal learning in new ways.

Michael Levine, senior vice president of learning and impact for Noggin, Nickelodeon's research-based early learning service, and a funder for the project, stressed, “It’s not just the pipes. It’s the people.” Levine focused on combining human-capital infrastructure with physical infrastructure in the next three years.

Michelle Sioson Hyman, senior vice president at Raising A Reader, focused on families of children 3 to 6, and what they need to feel joy and confidence in working with their young children, in whatever setting they are in. She called for a focus on helping parents of “our littlest ones,” so that “they are seeing from their role models that learning can be fun.”

And our New America colleagues from the Open Technology Institute, Michael Calabrese and Amir Nasr, laid out several ways that localities and school districts can get innovative in bringing broadband and wireless access to their communities. (See their report, The Online Equity Gap, for examples from multiple communities around the country.)

Video from the event is now available (and on YouTube, below) and the conversation continues at #underconnected on Twitter.