Credit or non-credit, workforce programs at Mott Community College get a boost from embedded credentials 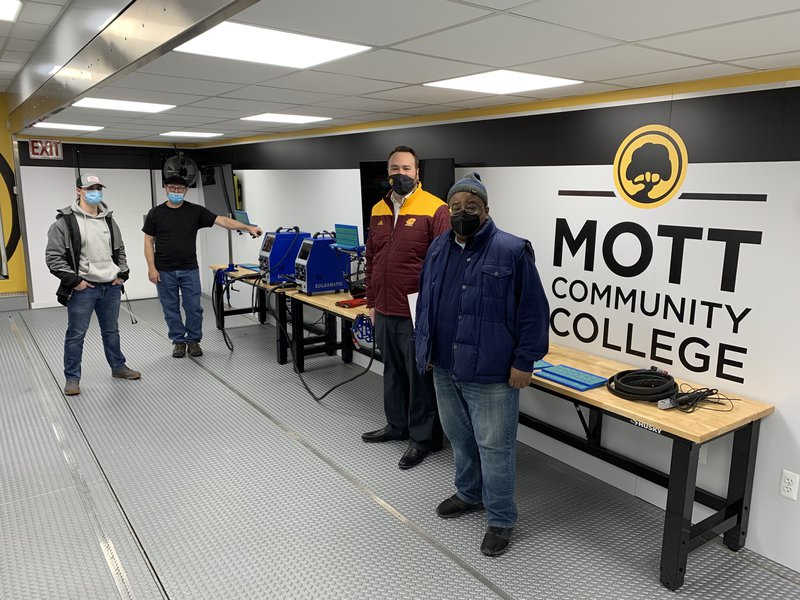 Bottled water is everywhere in Flint, MI. It was available for free in our hotel lobby and for a dollar at the restaurant next door. Mott Community College also had a supply ready for our visit as part of the New Models for Career Preparation project. The tap water is safe to drink now, but many Flint residents still prefer to avoid it.

Distrust of public institutions runs deep in Flint, a predominantly Black city whose economic fortunes haven’t recovered from the closures of General Motors plants that employed about 80,000 locals at their peak in the late 1970s. In 2014, a state-appointed city manager switched the city’s water supply to reduce costs, poisoning thousands of residents with lead and other chemicals. The extent of the water crisis was publicly downplayed or covered up for another year and a half, long after the damage was done.

Despite everything, Mott has managed to maintain public trust. The half-dozen students we met on our visit included nearby residents as well as commuters from farther afield, including two living an hour away in Lansing. They were all drawn in by Mott’s community reputation, as well as the welcoming demeanor and consistent engagement of its large student services staff. And though the students we met were pursuing training in a variety of different job roles—medical assistant, HVAC technician, lineworker, tech support specialist—their programs had something in common: they all included embedded credentials.

Embedded credentials are industry certifications or licenses that are bundled into a larger program of study. They add heft to a learner’s resume by providing another source of skill validation—such as a state government for a license, or a vendor or trade association for certifications—alongside the higher education institution that confers the certificate or degree. In some cases, they help students “stack” progressively more advanced educational programs together, an option that’s become more popular, though not necessarily easier to explain, as students opt for shorter, job-relevant training pathways.

At Mott, embedded credentials serve their usual resume-boosting purpose for students as well as a quality assurance function for the institution itself. Embedded credentials are portable across local job markets, helping students who may need to commute to earn higher wages outside of Flint. They also provide Mott’s faculty and administrative staff with a shared skills framework from which to build their workforce programs. Marcus Matthews, Mott’s Assistant Vice President of Workforce and Economic Development, says that each of Mott’s 19 short-term workforce programs have at least one embedded credential, and new programs won’t be launched without one.

Beyond helping the college build more relevant programs, and helping students show what they’ve learned, embedded credentials also help connect Mott’s credit and non-credit offerings, giving students options for continuing their education over the long term. A student who earns AWS welding certifications through a non-credit program, for example, receives up to eight credits towards Mott’s 30-credit welding certificate or its 69-credit applied associate degree in welding. Certifications in IT, robotics, and health care occupations provide similar transfer options, too. “We approach all of our programming thinking about [non-credit to credit] transfer,” Robert Matthews, Associate Vice President for Workforce and Economic Development, told us. “Because we’re the only community college in this area, we touch a lot of people. No matter what their level of engagement is, there’s always a possibility that they’ll become a student.”

Making sure that everyone who wants to be a student can become one is especially important in the pandemic era. Mott’s enrollments dropped by about a fifth during the early pandemic, and the college emphasizes the portability and transferability of its workforce credentials in marketing efforts to get students to enroll or re-enroll. The college’s recently published strategic plan also includes embedded credentials as a key component of its strategy for improving the quality and stackability of its academic options. Mott aims to increase the number of credit or non-credit programs with embedded certifications or licenses, or which include stackable certificates of achievement, by five to ten percent over the next two years.

Embedding credentials is, of course, only a small part of the work that Mott’s Workforce and Economic Development division has done to build trust and relationships among students, employers, and workforce development partners in its 20 years of operation. Industry credentials, credit for prior learning, on-site child care, customized training, and Mott’s mobile training center are distinct but connected elements of the institution’s central mission to make education accessible and worthwhile for its students. “One of the things we stand on is that we screen in, not out,” said Daphne Epps, Director of Youth Services: “That goes for our students and also our employers. They give us their vision, we say yes, and we see how we can make it happen.”