In California, a new survey investigates how work conditions can affect teacher practice and program quality 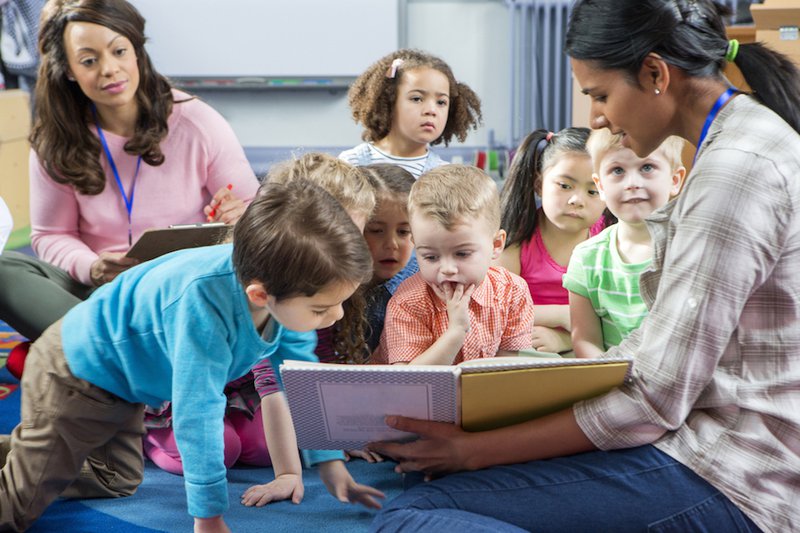 It’s just before dismissal, and Kathy Rohrer, a teacher in Oakland Unified School District, is helping her students move between activities. The prekindergarteners sit together at a round table and count birthday candles and identify shapes on a pretend cake. They sort cardboard boxes and take turns pouring purple sand through funnels at a sensory table. Rohrer reminds one student not to throw sand on the floor and calms another who has trouble waiting his turn.

Her special education students, many of whom are on the autism spectrum, need a lot of assistance, and Rohrer wears a pendant around her neck with pictures of behavioral cues to help her communicate with her students. The pictures help the children understand when she needs them to stop, listen, or modulate their voices.

In addition to this daily work of managing her classroom and building relationships with her students, Rohrer, like many early education teachers, is responsible for conducting developmental evaluations for each of her 21 students twice a year. She also completes progress reports, individualized education plans, and communicates regularly with other teachers, support professionals (physical therapists, occupational therapists and speech teachers), as well as with families.

“It’s a lot of paperwork,” Rohrer said. And like most teachers of pre-K children, Rohrer has little paid preparation time. Supporting her children, many of who also suffer from poverty, trauma, and homelessness, can be overwhelming.

“Kids bring a lot to class,” Rohrer said on a recent afternoon.  “And there are times when I feel like I’m not really helping them. There’s a lot of stress.”

A new survey of early childhood educators in northern California finds that teachers with jobs like Rohrer’s too often say they lack the supports they need to do their best work. Alarmingly, nearly half of the teachers are so financially strapped that they worry about putting food on the table for their own families.

The survey of 338 early educators in Alameda County’s Head Start and state-funded programs revealed that while teachers value their work and generally feel valued, they are not always supported. Researchers at UC Berkeley’s Center for the Study of Child Care Employment developed Supportive Environmental Quality Underlying Adult Learning, or SEQUAL, as a tool to document teaching staff perspectives about workplace policies, practices, and relationships that support or hinder their work in the classroom. This study was completed in partnership with First 5 Alameda County.

These issues are exacerbated by high staff turnover. Only about one-half of the teachers believed that when turnover occurred everything possible was done to hire qualified staff.

Keeping staff abreast of the latest teaching methods and research is critical to high-quality teaching, and although most of the teachers and care providers surveyed had access to professional development, only about half said their school paid for it.

Lack of time was another impediment. Fewer than half (47 percent) said they had time to carefully observe children, even though a large majority had been trained to do so.

Rohrer said that without time to carefully observe the children as closely as she would like, her evaluations suffer. She often has to rely on memory and knowledge of individual children, instead of careful observation. Students who are quiet or follow directions well are the ones who “fall through the cracks.”

Teachers surveyed said the environment was very collegial and they could count on support from fellow teachers and teamwork was productive. About three-fourths said they felt empowered to make decisions in the classroom, yet this was limited to curriculum or classroom management. Only four in ten felt that they had a say in higher-up decisions that affect their work or that teaching staff is invited to give input on program policies. They also felt less control over which children were assigned to their classrooms. Less than one-third said they had provided input into decisions about which children should be assigned to their classrooms.

The survey also found that teachers in programs that scored higher on quality metrics such as the Quality Rating and Improvement System (QRIS) and The Classroom Assessment Scoring System (CLASS), have fewer concerns and are more satisfied.

The most disturbing findings from the survey were how precarious teachers’ lives are. Three-fourths worried about being able to meet their basic needs. Housing, health care, and transportation costs topped their list of worries. Fully 54 percent worry they won’t have enough money for food for their family. Most desperately need a raise, and nearly seven in ten worried they wouldn’t get one.

Ana Moreno, the associate program director for the New Teacher Center, a national nonprofit that works to improve teacher effectiveness, has been working with teachers in Oakland for several years to implement a new coaching program for early childhood teachers in the district. She said economic concerns continue to be a big problem. Low salaries coupled with the high cost of living also push many teachers far outside the district, creating long daily commutes for many of the teachers and instructional assistants Moreno works with. Teachers often work two jobs to make ends meet, Moreno said, with the second job frequently a late shift.

This schedule and the lack of paid preparation time can make participation in professional development and coaching programs difficult.

“What teachers need the most,” she said “is time. Time to collaborate, time to reflect.” Teachers need a basic level of professional support if they are to improve their teaching practice. “We can’t quite get to instruction until they have [substitute] coverage and ratio coverage and adequate supplies.”

As a more experienced teacher, Kathy Rohrer also helps to mentor new teachers in the field who she calls “bright” and “creative” and dedicated to working with young children. But she says they are very difficult to retain. “It’s very discouraging to them because they have great intentions. They come in knowing it’s not lucrative. They are trying to survive and suddenly all these rents go up and it’s just impossible.”