Child Care Shortages: What can we learn from World War II?

Lessons on navigating a child care crisis during the COVID-era. 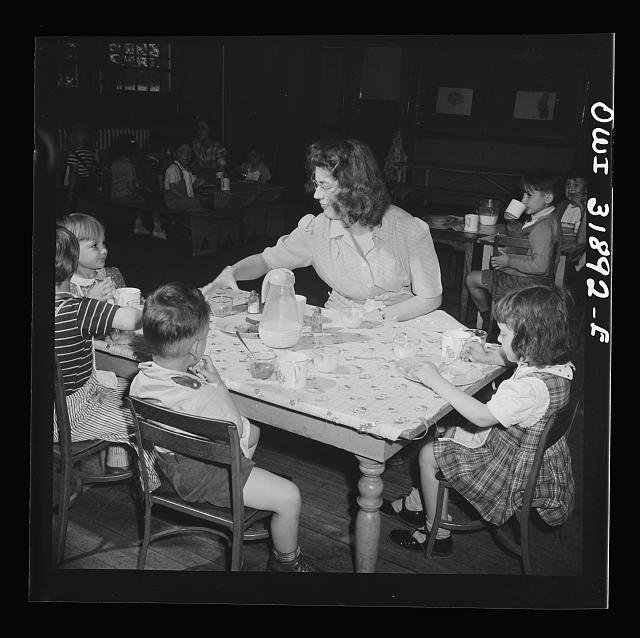 The coronavirus pandemic has drastically weakened the stability of the child care system. Prior to the pandemic, around half of the U.S. population across 22 states lived in child care deserts. Now, access to care has diminished further. At the moment, 43% of remote workers and 49% of in-person workers need child care but cannot access it. In compliance with social distancing measures enacted to slow the spread of the virus, many centers around the country have temporarily closed their doors.

Like so many small businesses around the country, child care centers and home-based child care centers are buckling under the weight of the economic fallout and uncertainty introduced by the pandemic, some on the brink of permanent closure. At the moment, 60 percent of child care centers remain closed and only 27 percent of providers believe they could survive a temporary month-long closure without government support. Without adequate federal funding, the disappearance of centers could result in the permanent loss of nearly 4.5 million child care slots.

BLL sat down -virtually- with Dr. Sonya Michel to talk about the federal government’s response to the need for child care during another crisis - World War II - and what we can learn as we navigate the coronavirus pandemic and face an even greater need for child care.

Professor emerita at the University of Maryland, Dr. Sonya Michel is a historian and a women’s studies scholar who focuses on gender and social policy. Her book, Children's Interests/Mothers' Rights: The Shaping of America`s Child Care Policy, explores the history of child care in the United States, as well as the policies and social attitudes about gender that shaped it. Recently she has written "For the Duration Only? Shaping the Post-Pandemic Safety Net," and "The Child Care Primary," both published in The American Interest.

Our conversation has been edited and condensed for clarity.

What motivated you to explore the history and contemporary issues surrounding child care?

My work very much comes out of my personal experience. When I was in graduate school, I had my daughter and two older kids and had been personally struggling with the issue of child care for a very long time. That was really part of what motivated me to choose child care as a subject of study and research. Allowing me to bring a scholar’s perspective to certain issues, this work is a way for me to combine my personal interests and my political concerns with my intellectual contributions.

During this public health emergency, described by many as a war against the coronavirus, there are rising concerns that without adequate funding, child care centers that have temporarily closed for safety or budgetary reasons will never reopen, resulting in a childcare shortage that will persist even after the pandemic.

Is this the first time the United States has faced the reality of potential childcare shortages due to a national emergency?

I immediately think of World War II (1939-1945), the first time the federal government provided funding for child care. With the advent of the war, the nation needed women to work in defense industries because men’s departure and engagement in the war left the labor force depleted. At the same time, the defense industries were heating up. In need of more workers, they began to recruit women. The federal government knew it had to create accommodations for child care.

In 1941, lawmakers in Congress made the decision to use funds available through the Lanham Act—also known as the Defense Housing and Community Facilities and Services Act—to establish child care centers within local areas where wartime industries operated.

This was a kind of a miracle! Prior to the Lanham Act, there existed no system of public funding for child care except charity. Bear in mind that there was not a lot of precedent leading up to this moment; this development was a big deal.

Can you tell us a little bit about what preceded the government funded child care centers introduced during WWII?

Up until the late 1930s and early 1940s, there was no federally funded child care system. Instead of child care centers, there were day nurseries, which were mostly the product of charitable interests. Charities established day nurseries because they wanted to support and bring poor women into the labor force. However, the nurseries themselves were not of great quality. Sometimes referred to as “warehouses,” they lacked structure and did not have an educational component. Overall, these services carried a lot of stigma. Middle and upper class women would never consider putting their children there, but women who had to work to make ends meet had few options.

During the Great Depression (1929-1939), the New Deal established the Works Progress Administration Emergency Nursery Schools (ENS), highly educational facilities, to which parents brought their children. Though the ENS met the needs of families, ultimately, the primary goal of the Works Progress Administration was to create employment opportunities for educators who needed work. The centers simply weren’t open long enough to really help working mothers as many operated for only half the day. Moreover, administrators limited eligibility to those families who demonstrated financial hardship or were on government relief.

Eventually, the federal funding which established these ENS programs dried up and by 1943, wartime child care centers had fully taken their place.

What barriers made it difficult to establish a strong and sustainable government-funded child care system?

For one, the bureaucratic red-tape really slowed everything down. The Lanham Act provided federal funds to local communities through federal-state infrastructure. These communities then had to apply for funds to establish care centers. The process proved complex and resulted in a lot of foot-dragging, in part because there remained a lot of resistance at the local level. Most people didn’t understand the need for child care, as they thought women’s place was in the home, especially if they had young children.

Another barrier was the cultural assumptions about the place of women. Women. With. Jobs. This was all new! Generally speaking, the belief that women should be at home proved common and widespread not only amongst the general public, but also amongst social workers, child psychologists, and childhood educators—professionals who built their reputation around the notion that working outside the home would lead to the deterioration of the maternal-child bond and the child’s wellbeing.

This meant that if a professional who opposed the idea of working mothers sat on a local wartime council, they could block efforts to establish child care centers within their area. Or if they were tasked with performing intake at fully operating child care centers, they could sway a mother’s decision to use the services by questioning her motivation. Discouraged, she would eventually forego entering the defense industry altogether, thereby contributing to the underuse of existent child care facilities.

Was the federal government’s response to the changing workforce and need for child care adequate?

Ultimately, there were not enough child care centers. Care facilities were created with a capacity for 300,000 children. However, that met really only a fraction of the need. As a result, many women had to find other accommodations for their children. And the centers themselves were not always of the highest quality, due in part to the fact that local communities had to cover 50 percent of facility-related expenses.

Moreover, some child care centers went underused for a number of reasons: African-American and Latina mothers faced racial discrimination, which blocked them from admission; some mothers associated the centers with government relief; and others found the hours unaccommodating, the training lacking and facilities inappropriate for children.

What was the impact of framing government-funded child care primarily as an emergency response only?

Although Congress reached the decision to apply the Lanham Act to building child care infrastructure and supporting women in the labor force, Paul McNutt, then-head of the War Manpower Commission, framed the provisions as “for the duration only.” Because the intent was not to create a long-term precedent, many centers eventually were closed after the war.

Limiting the governments’ provisions to a wartime response set the expectation that all would return to the status quo once the war ended. Ultimately, the framing of government funding for childcare services (and women in the labor force) as “for the duration only” prevented the normalization of women working outside the home and the widespread provision of child care services.

What lessons should we take away as we think about how to address the child care crisis that has intensified as a result of the coronavirus pandemic?

Lesson one: We need the federal government leading the response to the child care crisis because it’s the only institution that has the funds —and theoretically—the bureaucracy and infrastructure to meet our current needs. This is not to say that we should maintain a wartime footing at all times; that’s not practical. The first thing that federal government needs to do is secure and distribute funding.

Emergencies of a large scale require responses of equal scale. Neither the local community, the state, nor the private sector (the charitable, voluntary sector) can adequately address the childcare shortage and other needs—the needs are too huge.

Lesson two: We need to be mindful of our assumptions and ideologies. During WWII, the assumptions were that women belonged in the home. One assumption that people have circulated during this pandemic-era is the idea that the federal government is unfairly intervening by making people stay at home or by closing businesses. (Childcare centers come right in the middle of that.) The big problem is the fear of disease. To contain the spread of the virus and slow rates contraction, the government has taken certain measures. It isn’t acting arbitrarily, and the results of social-distancing and isolation have been generally effective.

Lesson Three: Any positive changes will not become permanent unless we as a society mobilize. These emergencies—WWII, COVID-19—are the mothers of social innovations. They are opportunities for thinking outside the box and seeking solutions, out of which some good may come. We shouldn’t stigmatize certain responses nor should we limit the applicability of certain policies just because they arose during a moment of emergency; they may, in fact, have inherent good and value. Instead, we can use the pandemic as a precedent and momentum for demanding what the future should be.