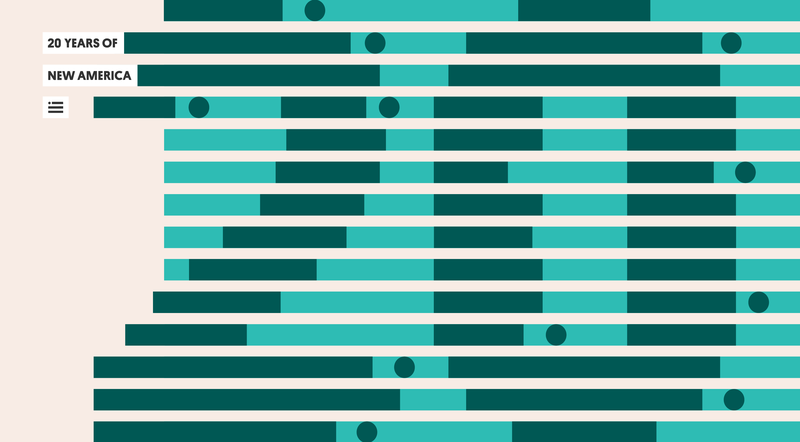 Letter from the CEO

Anniversary years are pivot points. They provide a moment to take stock of past achievements and to turn to future goals. As New America turned 20 years old in 2019, we looked back with pride. We compiled a list of our ideas and initiatives with the greatest impact, a stocktaking that engaged many former members of our community and proved to be as valuable for us as for any outside publicity. As we plan for the organization we want to be in the years ahead, let me review some of the defining characteristics of our work that I have valued about New America for many years, from my time on the board to becoming CEO, that will inform our aspirations as we move forward.

Our founders envisaged a place that would produce big, bold ideas. Over 20 years, we have changed the national conversation around the value of early education and the frequent lack of value in higher education. We have been a critical voice pushing structural political reform, from a focus on equal money to equal participation, with a special focus on providing voters with more choices in ways that would allow us to become a multi-party democracy. And we have been instrumental in changing the frame for both policy and public conversation from women and work to work, life, and the value of care for everyone.

Over the years, we have added public interest advocacy to pure idea generation, playing critical roles in the passage of the regulation on net neutrality, a fight that continues now in the courts. We have also led the fight to pass a law that would mandate transparency with regard to educational outcomes, showing prospective students what value they would get for their money at different colleges and universities. Today, that also means holding government accountable through the publication of verified facts, including databases on drone strikes and right-wing terrorist attacks in the United States, among others.

Our founders envisaged a new generation of public intellectuals, and New America has been a home for journalists from the start. Simon and Schuster Executive Editor Priscilla Painter says, “New America has been a crucial incubator for some of the most important works of nonfiction to be published in the last 20 years.” The National Fellows Program has had over 200 Fellows who have produced more than 100 books, including 13 New York Times bestsellers, three Pulitzer finalists and one Pulitzer winner, among other amazing achievements.

Our founders envisaged a place that would tap into innovation across the country, so they opened a California office. Today we once again have a presence in California, and also in Chicago, Phoenix, and Indianapolis, connecting the work we do to solutions being generated on the ground. Our public interest technology fellows fan out across the country, and our Partnership to Advance Youth Apprenticeship also works with nine grantees and over 31 partners across the country to build youth apprenticeship programs in disciplines from insurance adjustment to nursing to cybersecurity.

I am proud and grateful to be able to lead this wonderful organization into its third decade. We are fortunate and privileged to do the work we do: to think, research, report, write, advocate, code, assist, mentor, collaborate, and create in the service of a better America, one in which we actually live up to the ideals of equality, justice, liberty, and democracy that our founders invoked. As we look forward into the 2020s, we see the beacon of 2026, the United States’ 250th birthday as a nation. We have a vision of what that America could look like; we will do everything in our power to help achieve it.

Letter from the President

As we celebrate our first 20 years, I can see the many ways in which our original values thrive in the New America of today. I am most struck by the way that New America has remained consistently prescient, looking just around the corner to the policy questions we will face tomorrow. The world is confronting dramatic social and technological change, and our talented staff have risen to the challenge. They are driven to not just draw a broad vision of the promise of a renewed America, but also to recognize and address the impact of this change on the communities that will be most affected.

As policymaking has moved outside of Washington, D.C., so too has New America’s focus. We are cognizant of mirroring the world we live in, both in our staff and in our approach. We are looking beyond the Beltway to communities across the country that are solving policy challenges in innovative and creative ways. But we also continue to ask ourselves what it means to do local work — how to support communities as they debate policy solutions, how to learn from the solutions they are employing, how to raise the profile of communities that don’t typically get a voice at the policy table, and how to ensure that the America we envision is truly inclusive for all Americans.

At the same time, we are not blind to the many tensions in our politically divided America.

We still see clear examples of racism, sexism, marginalization, and intolerance across a number of domains accepted at a staggeringly high level. We are constantly working to ensure that New America’s culture reflects the equitable and inclusive future that we hope for America. As I look to the future of our country, I want a nation that values the role of women and men in creating a care economy that values work and family, and one that examines the potential human toll of automation on rural communities and communities of color and proposes innovative solutions to ensure that individuals are equipped to manage this technological change. I want a nation that deploys new technologies in a way that protects and enriches communities, not harms or burdens them, and one that values human lives and contributions equally.

I am proud of all that New America has accomplished in 2019, and I am grateful for the past 20 years of New America that has shaped the organization we have today. At New America’s core, we are made strong by our people: the visionary researchers, technologists, changemakers, storytellers, and staff who work every day to help America fulfill the promise of our nation’s highest ideals. And I could not be more excited to see how New America’s forward momentum will drive the next 20 years of public problem solving.

Letter from the Board Chair

Our country needs public problem solvers now more than ever. As President and CEO of the Chicago Community Trust and chair of the New America board of directors, I am devoting my time and energy to the people and practices that will bring communities together, develop evidence-based solutions, and renew the promise of America for all. New America is leading the way.

From my time in public health and global development to local community development and New America, I’ve found that strengthening communities and helping people manage change empowers the individual and ultimately enables our civic institutions to achieve more.

I joined the New America board seven years ago and I am continually amazed by the energy, intellect, and curiosity at all levels of the organization—and the renewal that New America itself has gone through. The board is committed and enthusiastic about the vision and the mission. The leadership and teams are eager to seek out powerful ideas wherever they are and promote people-centered approaches to policymaking.

This talented group of researchers, technologists, changemakers, and storytellers produce ideas that provide a roadmap for change. Their visionary scholarship showcases what a better and more inclusive world could look like in 10, 20, or even 50 years. And New America proposes innovative solutions that address key facets of our life, such as work, education, technology, and family life. In turn, New America researchers amplify carefully crafted research through impactful storytelling. It also convenes the world’s most influential people at dynamic events that bring these individuals directly into the public problem-solving equation.

In Chicago, I am focused on removing barriers to economic prosperity and social well-being for those most left out of opportunity in our region. The Trust is partnering with New America to do that. I hope you will join me in partnering with New America as we revitalize how we learn and work, reinvigorate our civic life, and realize our representative democracy. It is only through our collective strength and your support that we can save our nation for generations to come.