Where Brexit Meets the Troubles on the Irish Border 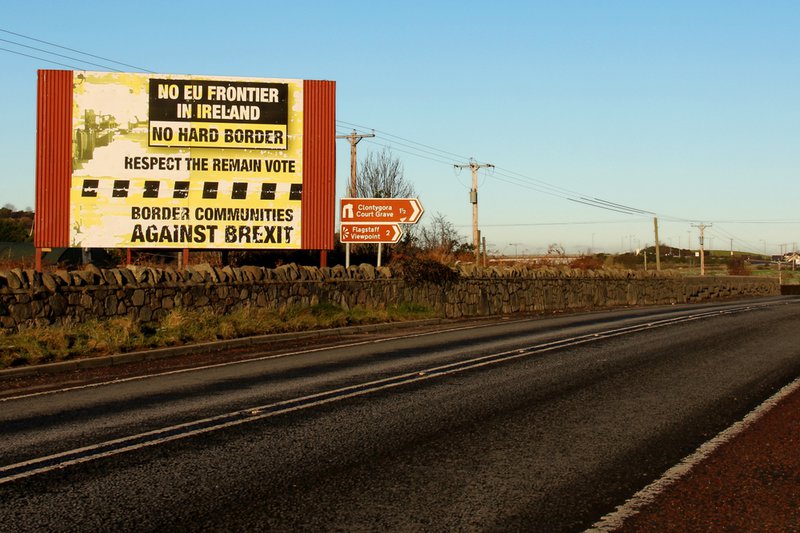 Twenty-one years ago, the Good Friday Agreement ended the Troubles—a conflict in Northern Ireland among armed Protestant and Catholic groups, the British military, and local police forces from 1968 to 1998. When representatives from the United Kingdom and Ireland signed the peace agreement on April 10, 1998, one outcome was removing the militarized border along the two countries. Where there had once been guards and checkpoints is now an invisible border. For those who lived through the decades of fighting, which claimed the lives of some 3,600 people, this is an incredible achievement.

As the Brexit negotiations continue, however, there could be the return of a hard border between the Republic of Ireland, which will remain in the European Union, and Northern Ireland, which will leave with the United Kingdom. The border question, in turn, is becoming one of the most controversial parts of the negotiation process due to the “Irish Backstop:” the uncertain promise that, no matter what, there will be no hard border of “physical checks or infrastructure after Brexit.”

In the New York Times, journalist Patrick Radden Keefe describes this border as a scar. In his recent book about the Troubles, Say Nothing: A True Story of Murder and Memory in Northern Ireland, he explains how that wound came about—and as a result, why the Irish border has had the power to hold up the Brexit process.

Northern Ireland was established in 1920 as a compromise with the Irish Free State, which formally became the Republic of Ireland in 1922. Because this formed an international border, customs regulated passage between the two countries until 1993, when the EU was established. During the Troubles, that customs border between the Republic of Ireland and Northern Ireland became militarized and enforced by the British, making it a target of violence.

When the Good Friday Agreement ended the conflict in 1998, part of the reason for the agreement’s success was the fact that the Republic of Ireland and the UK were both part of the EU—and it was believed that they would remain so in the future. Indeed, since then, citizens have been able to move freely between the countries, products are produced in the “single market” under the same regulations, and borders are essentially loose formalities.

This arrangement was healing for both sides of Ireland, and it has undoubtedly contributed to the tentative peace between the two countries. However, the last British watchtower was only removed in early 2007, underscoring how the invisible border is still a relatively novel development. In consequence, returning the border could also mean the return of strong emotional trauma and, in the worst-case scenario, political violence.

A point Keefe makes throughout his book is how present the Catholic-Protestant conflict was—and still is—in Northern Ireland. One of the first episodes of conflict was in 1641, after King James I created British plantations in Ireland for Scottish and English settlers. But Keefe notes that 300 years later, in the Belfast of the ’50s and ’60s, “people [still] had a tendency to talk about calamities from the bygone past as though they had happened just last week.”

As Keefe put it at a February book reading in Washington, D.C., “the thesis of the book is that the past is the present.” It’s an argument he executes well. In the book, Keefe points to a 2015 report that found that paramilitary groups like the Provisional Irish Republican Army (IRA)—which carried out sniper attacks, bombings, executions, disappearances, and bank robberies—are still active today, though in a “reduced form.” He also notes that, in 2012, violence returned over a seemingly small issue: After a city council vote limited how many days the Union Jack would be raised above the Belfast city hall, “protestors tried to storm the building, and riots erupted throughout the city, with unionist demonstrators throwing bricks and petrol bombs.”

The book was published only this past February, but evidence in support of Keefe’s argument has only continued to accrue since then. While current revolts can be as small as republicans scratching out the word “London” on signs for Londonderry, Northern Ireland is still the site of political violence. This year alone, the New IRA allegedly exploded a car bomb in Londonderry, killed four men “by appointment,” and claimed responsibility for mailing three “suspicious” devices. Just last week, the journalist Lyra McKee was shot and killed during a riot in Londonderry, also allegedly by the New IRA. Her friends held a protest during which they used red paint to leave bloody handprints outside the headquarters of a republican party associated with the group.

One reason Keefe's explanation of the Troubles’ enduring influence is so convincing is that he details not just the long and current history of the conflict, but also the intensity of Irish collective trauma and its many origins—namely, violence, uncertainty, and silence. To achieve this, Keefe combines his endurance-style journalism with an outsider’s perspective to find incredible, humanizing details of the Troubles without seeming to pick one side over another.

During the Troubles, what’s called post-traumatic stress disorder (PTSD) today was then called “Belfast syndrome,” a result of “living with constant terror, where the enemy is not easily identifiable and the violence is indiscriminate and arbitrary.” With page-turning anecdotes that carefully blend suspense and empathy, Keefe keenly describes not only how the Irish learned to live with such violence—for instance, running errands during pauses in gun fights—but also how those memories have endured. Especially for families of those disappeared, that trauma often lasted the rest of their lives, an experience that Keefe explores in painful, necessary detail via the story of Jean McConville, who was abducted in front of her children.

The book’s title, Say Nothing, is a clever reference to a Seamus Heaney poem about the Troubles called “Whatever You Say, Say Nothing,” and Keefe argues that this reflects the culture of the conflict itself. Citizens in paramilitary groups didn’t speak of their membership, even to other members—and even if those members were their own family. But especially in a smaller city like Belfast, that also meant living with ever-present, visible, and heavy secrets—for decades. Keefe tells a story of how Jean McConville’s son Michael once took a taxi as an adult, “only to look up and see that the driver was one of Jean’s abductors.” Yet “Michael didn’t say a word.”

Crucially, Keefe doesn’t stop at considering the psychological experience of the Troubles; he also looks at how institutions and structures responded to it. Keefe points out that the Irish conflict, politically and legally, never underwent a reconciliation process, and in that way, silence has been formally institutionalized. He spends much of the book slowly building a particularly poignant example: the career of Gerry Adams, a former leader of the Provisional IRA alleged to have planned and ordered years of attacks and deaths. Adams later became the leader of a major political party, Sinn Féin, while also stubbornly arguing that he had never been a part of any violence. With his close focus on the experience of the McConville family, Keefe explains how this could be particularly frustrating and traumatic for the families of the disappeared. While the Northern Irish police service established the Historical Enquiries Team to look into unsolved deaths in 2005, many families were dissatisfied and decided to investigate public records themselves. The HET was eventually replaced with a smaller unit in 2014 after budget cuts.

Under these circumstances, it’s clear that this history can never really be the past. The Troubles may have ended, but for those who experienced them, the violence, trauma, and memories are still right there, running parallel to—and often overlapping with—their everyday lives.

In 2011, a World Mental Health Survey Initiative found that, based on data gathered from 2004 to 2008, Northern Ireland had the highest global rates of PTSD. Other research suggests that suicides have actually increased, almost doubling statistics from when the Troubles ended, from 1998 to 2014, perhaps as a result of the population coping with conflict-related trauma. Documentary filmmaker Sinéad O’Shea argues that younger generations may actually romanticize the Troubles as a time of “heroism and purpose,” instead of the “unemployment, drug abuse, bullying and corruption” they currently face.

Though Keefe only briefly discusses Brexit in his book, reading Say Nothing feels particularly illuminating as border negotiations continue. Key to Theresa May’s Brexit promises was that the UK would have complete control over its own borders, trade, and migration policies, rather than having to follow those set by the EU. But her Irish Backstop promise, which is an insurance policy against a hard border, pledges the opposite. Trying to find a way to deliver on both promises has involved months of inconceivable debate and delay between the British Parliament and the EU. One possibility, though one not yet widely discussed, would be a referendum unifying Ireland—which, as Keefe puts it, would be an “ironic” realization of the IRA’s original goal. In the worst case, the fear is that any kind of physical border checkpoint will become a target for vandals and then granted a guard, who could then be the target of physical violence. This would then see the return of a militarized border, one reminiscent of the Troubles.

Brexit is complicated in its own right. But a deeper understanding of the Troubles, as Keefe offers in his book, helps to explain the anxiety, frustration, and stakes around something as seemingly mundane as a border-crossing procedure.