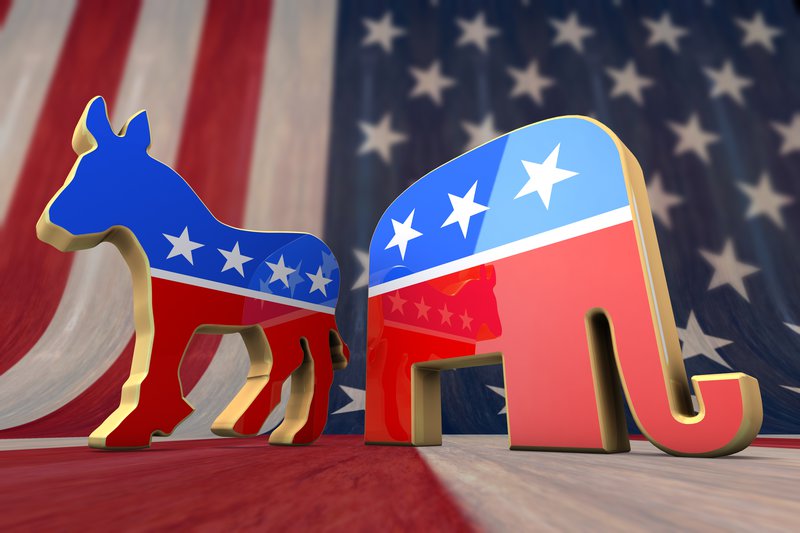 Donald Trump is a different kind of presidential candidate. We have never before seen someone whose actions so consistently shatter the norms of acceptable behavior, whose fear-mongering and bullying so closely resembles the maniacal mold of a fascist dictator.

But while Trump’s style is new, the energies and resentments that he channels are not. They’ve been around for a long time. What’s different now is that those resentments have fully concentrated in a single political party—so fully that a tribune of resentment (Trump) has now been able to emerge from that party. And it’s hard to see these resentments going away any time soon. Republicans will likely have a Trump problem for at least the next decade, if not longer.

The perplexities of 2016 make more sense if we understand that they didn’t come out of nowhere. Instead, we should see Trump’s rise as the culmination of a 50-year migration of white-working class voters out of the Democratic Party and into the Republican Party, and the concurrent migration of highly-educated professionals out of the Republican Party and into the Democratic Party. As these constituencies shifted party allegiances, they pushed and pulled the two parties in very different directions. This election is the result.

This shift has also coincided with economic forces (globalization, technological change) that have increasingly concentrated economic growth in the urban areas where Democrats are stronger while hitting the old industrial manufacturing and rural areas where Republicans get the most votes. It has also coincided with a period in which America has become much more ethnically and culturally diverse, and Christian whites have seen their cultural dominance give way to something new and different.

Since none of these forces are showing any signs of immediate reversal, the dividing lines that the 2016 campaign is clarifying will only grow sharper and more intense over the next few election cycles, especially as the parties’ policy agendas shift in line more clearly with their voters. Yet both parties will have strong dissenting factions. As this transition continues, these dissenting factions will both put up strong fights. This could create an unusually creative and productive period in American politics—but only if we manage it correctly.

Any history of the present moment has to begin with the civil rights laws of the 1960s. Prior to the 1960s, Democrats had dominated the South for a century (Republicans, remember, were the party of Lincoln and Northern Aggression). But by supporting civil rights, the Democrats effectively lost the South and alienated middle-class whites everywhere who were most directly affected by desegregation.

In 1968, Nixon saw a political opportunity he couldn’t miss, and so ran as the “Law and Order” candidate as fears over urban unrest swept the country. He began winning over disaffected whites in droves—especially in the South. Nixon won narrowly in 1968, with Alabama governor George Wallace winning several southern states as a third-party segregationist candidate.

In 1972, with Wallace gone, Nixon won in a landslide. Nixon also benefited from Democrats’ nomination of George McGovern, whose socially liberal policies limited his appeal. But McGovern was the tribune of a new generation of liberals, who envisioned a new coalition of minority voters, college students, and white liberals, based on the coasts and in the cities, around a new progressive politics. In 1972, this was not a winning coalition. By 2008, it would be.

But we’re getting ahead of ourselves. From 1968 to 1988, Republicans won five of six presidential elections. Democrats won only in 1976, mostly because of the backlash over Watergate. In 1980 and 1984, Ronald Reagan seemed to solidify the gains that Nixon had made among disaffected working-class whites, a group that colloquially became known as “Reagan Democrats.” The Reagan coalition mixed traditional values, free market economics, and neoliberal foreign policy. This was a powerful political trifecta in the early 1980s, given the mood of the country and the supporting demographics.

Meanwhile, the Democratic coalition was becoming more socially liberal. Democrats made gains among highly-educated professionals, who were concerned about issues like the environment, abortion, and nuclear weapons. And so Democrats moved to the left on social issues, especially with fewer conservatives in the party to offer a dissenting view.

Bill Clinton’s presidency temporarily stemmed the migration of working-class whites out of the Democratic coalition. In contrast with the out-of-touch patrician George H.W. Bush, Clinton was an earthy Southerner who loved McDonald’s. Unlike the old Democrats, Clinton was no longer a captive of labor unions (who were shrinking anyway), and he stood up to the McGovernite forces of social liberalism by championing things like “ending welfare as we know it” and school uniforms. This allowed him to take back many of the Southern states that Democrats had lost at the presidential level.

But after Clinton, Democrats went back to nominating presidential candidates (Gore, Kerry) who came off as liberal elitists, and George W. Bush went back to solidifying Republicans gains among working-class whites.

In 2008, Barack Hussein Obama was elected president, and re-elected in 2012. The 1972 McGovern coalition of young people, minorities, and white liberals was now a winning coalition, at least at the presidential level. America was more now more highly-educated, and more diverse: By 2012, roughly a quarter of all voters in the US were people of color, and Democrats got nearly half of their votes from them.

Over the course of the Obama years, Democrats have grown more comfortable with their new coalition, fully leaning into cultural diversity as a core value (look no further than their recent convention). They’ve embraced gay marriage, gun control, and criminal justice reform in ways that would have been unthinkable in 1996. In 1996, after all, Democrats still had many southern conservatives in their congressional delegation, and couldn’t afford to alienate middle-class white voters. But after the 2010 Republican takeover of Congress, the Democratic congressional delegation was purged once and for all of its remaining southern whites. That meant that almost all congressional Democrats represented socially liberal places; no more vulnerable seats to protect; no more dissenting voices.

But as with civil rights in the 1960s, the Democrats’ liberal turn has provoked a backlash among more culturally-conservative whites. Having a black man as the party’s (and country’s) most prominent face also appears to have been a large provocation to whites sensitive about their social status, stirring up racist feelings. And unlike in the 1960s, when immigration was relatively low, the share of foreign-born Americans is now at its highest levels since the 1920s, also provoking white backlash.

This is also a story about economics. The backlash against free trade among many Republican voters stands in for a larger resentment against a decades-long economic transformation that has particularly hurt many of the once middle-class strongholds that Republicans took from the Democrats—places where the people who took pride in hard work now have a hard time finding decent work.

But while Republicans gained most in the places increasingly left behind in a post-industrial economy that is more punishing than ever to those without an advanced degree, Democrats have gained among the highly-educated classes and the urban hubs where most of the economic gains are now concentrated. Democrats are now the preferred party of the wealthiest Americans.

Consider the chart below. In 1992, there was absolutely no correlation between a state’s support for a Republican presidential candidate and the share of its population with college education. In 2012, the correlation was clear. Democrats were doing considerably better in the most highly-educated states. College education not only correlates with higher earning potential; It also correlates with generally cosmopolitan values, including less racial prejudice.

The Republican Party has struggled internally over how to handle the growing divide between its still generally globalist elites and its populist-nationalist voters. Consider immigration, a major issue in this election. GOP elites have tended to be pro-immigration, both because they tend to have more cosmopolitan values (conveniently in line with their donors), and also because they can look at the demographic projections and see that a party that caters to aging middle-class white voters is not a party with a long-term future in America.

Perhaps the more “establishment” Republicans thought that they could control the anger they courted. And, for some time, they did. But the problem is that by allowing this anger to flourish and expand, and then doing nothing substantively to salve it, establishment Republicans have now found themselves outnumbered within the party. That’s why Trump and Cruz were the last men standing in the Republican presidential primary.

Donald Trump has completed what began as Nixon’s “Southern Strategy.” Republicans are now fully the party of disaffected middle-class whites. These are the voters that Republicans wooed away from Democrats steadily over the last half century by playing on “law and order” and implicit racial resentments.

The problem is that now they own these voters, and the bigger problem is that these voters now appear to own them. These are the voters that gave the Republican Party to Donald Trump. And every day that Donald Trump campaigns, he is communicating information to voters about what it means to be a Republican. And for the majority of Republican voters who care more about partisan identity than core ideology, these re-definitions are changing how they view the world, with consequences beyond 2016.

The anger behind Trump is probably not going away

Perhaps Trump will lose so spectacularly that Republican voters will decide to try another approach next time, and nominate Paul Ryan or Marco Rubio. But this seems unlikely. Not only has Trump changed what it means to be a Republican for many—he is also gaining from tail winds. America is becoming a more diverse and liberal place, which heightens the perceived existential threat to whites, raising the stakes. This threat will feel even scarier if there are continued ISIS-related terrorist attacks. And there is nothing to suggest that economic circumstances are going to improve in the places where Trump support is highest. All this will contribute to more angst and resentment.  Barring some unexpected turnaround, the 2020 Republican electorate will look more, not less, like the core Trump voter.

Meanwhile, Democrats will likely continue to move to the left on social and cultural issues, given the power of the core constituencies in the party.

However, because Democrats are now absorbing more highly-educated and high-income elites who play key roles as campaign funders, it will be difficult for Democrats to move to the left on economic issues, as many of their voters might want them to. This will provoke internal conflicts between the establishment Clinton wing and the insurgent populist Sanders wing of the party.

Republicans will also remain split internally for the immediate future. Traditional establishment Republicans will fight hard to win back control of the party. Most still can’t fathom being Democrats.

The one potential for optimism here is that these internal party splits will likely force congressional leadership to become more decentralized, which may open up space for some new coalitions that can reduce partisan polarization in Congress, and achieve unexpected compromise on economic issues in ways that reduce inequality and restore some semblance of middle class to America. If this can happen, perhaps there will be less raw material for disaffection and resentment. It will be a narrow needle to thread, but failure to do so looks ugly: a society that remains deeply divided in increasingly violent and unstable ways.

While the future is always uncertain, one thing seems clear: The 2016 election has tipped a balance that tilts the Democrats into being the liberal/neoliberal multicultural urban cosmopolitan party and the Republicans into being the populist nationalist white party. While the coalitions are still split and in transition, this is where American politics is headed, barring some unexpected intervention.