Stay and Play—and Learn—at the Library 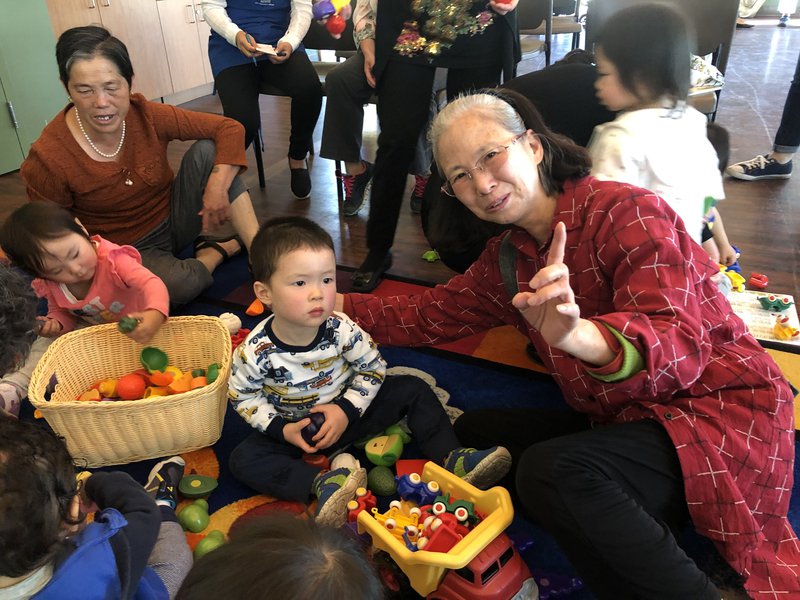 Each day in the United States, millions of grandparents, nannies, and neighbors take care of young children while their parents go to work. And each day, with little or no formal training (not to mention little or no extra money), these caregivers have to figure out how to make the most of their time with these young charges.

A pilot program in California aims to help by tapping into the potential of public libraries—not only as places for engaging kids, but as essential resources for caregivers seeking new ways to foster early learning.

Funded by a $50,000 grant from the California State Librarian, a $150,000 in-kind contribution of staff time from participating libraries, and $250,000 in grants from the David and Lucile Packard Foundation, Stay and Play opened in five public libraries across the state this spring. (Full disclosure: the Packard Foundation is also a funder of New America’s Early and Elementary Education Policy program.)

At first blush, the program’s weekly classes might look like a regular “storytime”—a decades-long staple of local libraries. But Stay and Play provides guidance to informal caregivers beyond simply reading books aloud. As the number of young children in the United States continues to increase, public financing of quality childcare and pre-K continues to fall short of need, and research repeatedly confirms the extent to which children’s early experiences affect later success, programs like Stay and Play could help bridge essential gaps in a community’s early learning ecosystem.

“A lot of times, informal caregivers underestimate their role,” says Araceli Delgado-Ortiz, early education services manager at San Jose Public Library. “They need to know they make a huge difference in the life of a child.”

That recognition is on display at the San Jose Public Library on a recent Wednesday morning this month, as a group of caregivers and very young children—most of them from the nearby Chinese immigrant community—arrive to take in the day’s program. Caregivers pull toys from the library’s Wee Play and Learn cart and then enter the community room, where librarian Rosalínda Savercool sits in front with volunteer translator Hua Zhang. The topic of the day is "Stress: Joys and Challenges of Caring for Children," and after a round of songs, Savercool and Zhang use books and other activities to introduce new words and encourage children to express themselves. “Can you roar like a tiger?” Savercool asks a little boy in pajamas.

Next, the kids and caregivers are invited to stay and play. Librarians bring out large bins of toys and blocks, kids and caregivers sit on the floor and build, and grandparents mingle and talk. One of them is Ms. Li, who cares for her two-and-a-half-year-old grandson Zachary while her daughter attends classes. The program helps her feel the “closeness of the community,” says Ms. Li. Plus, she adds, it helps her grandson get ready for school.

School readiness is, in fact, one of Stay and Play’s long-term goals. As is the case with most states, California’s public preschool funding doesn’t even cover all eligible children (those with parents at 70 percent of the state median income), let alone all 3- and 4-year olds. According to Delgado-Ortiz, more than three-quarters of the children served at San Jose Public Library aren’t enrolled in preschool. “We are the preschool and the formal learning that these children receive,” she says.

In light of these trends, library leaders have begun implementing programs that are both joyful and educational, support early language and literacy, and provide tips on extending that learning at home. Grass Valley Library (another Stay and Play site), for instance, now has children’s programming designed to replicate things caregivers could be doing at home—such as helping children to design their own books—while activities at San Jose Public Library align with the state’s Preschool Learning Foundations. Some Stay and Play library programs have also adopted the Touchpoints for Libraries program, which helps parents and other family members understand child development stages.

This programming pivot has also resulted in librarian training on children’s growth and development—something that hasn’t traditionally been part of the library school curriculum, according to Julie Weatherston, project manager for the Stay and Play program.

Librarians have also adapted in other ways. When Santa Barbara Public Library first started its Stay and Play sessions this spring, very few caregivers and parents would attend—something that baffled library staff, according to acting library services manager Molly Wetta. Informal surveys revealed that the 10am start time was too late for many caregivers, and staff members accordingly shifted their working hours to open at 8:30 a.m.—resulting in dozens of children and caregivers arriving each Thursday for Stay and Play sessions.

“The kids are laughing and learning. It really seems to be working,” says Santa Barbara branch librarian Ahmad Merza, holding up a photo of nearly 20 babies playing on the floor while caregivers chat with one another nearby.

Still, successful outreach isn’t a given—librarians anticipate that many immigrant families might worry about coming to a public institution for fear of being targeted for deportation.

“There is a lot of fear about coming to a government place right now,” says Weatherston. “So we don’t want to add another layer of people having to provide information that is really personal.” Thus, rather than having to sign in, caregivers receive cards that are stamped by librarians every time they come for a visit.

In the first six months of the Stay and Play program, librarians counted more than 416 adults and 465 children participating across the five locations. (In addition to San Jose, Santa Barbara, and Grass Valley, the pilot is also underway in Fresno and Tulare County.) The 2019-2020 California state budget should spur additional momentum, as the state will provide $5 million in one-time funding to early learning library programs in jurisdictions with the lowest per-capita library spending.

Similar programs for infants, toddlers, and their caregivers are emerging across the country. Carnegie Library of Pittsburgh, for example, runs a hands-on “Family PlayShop” program every week, and a recent cover of the magazine Children & Libraries shows an infant crawling on the floor, with the headline “Messy and LOUD at the Library!”

Even—and especially—in this tight fiscal climate, librarians like Delgado-Ortiz are committed to serving the entire community.