It's Raining Manhood, But Who's Saying Hallelujah? 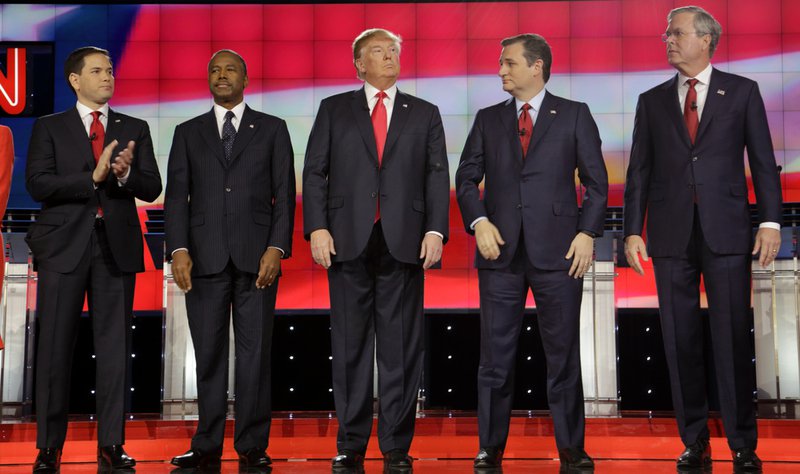 From the beginning, gender was going to be a determining factor shaping the 2016 presidential race. As it shaped up to be a face-off between a female Democratic front-runner and a flotilla of GOP candidates who can’t win without securing the votes of women across racial and economic lines, the centrality of gender only grew more apparent. Accusations and affirmations of supporting Hillary “just because she’s a woman” ran thick in the public sphere alongside accusations of bullying sexism from “BernieBros” and the insightful commentary (most notably Rebecca Traister’s All the Single Ladies) insisting that women, as a political demographic, are neither a monolith nor a punch line.

As the weeks wore on and we bid farewell to many a Republican candidate (and a few Democratic contenders—we hardly knew you, Lincoln Chafee) it seemed that the ways in which this election was destined to be about gender would be All About Hillary. And perhaps it is, if one has a narrow understanding of how gender norms work. But any comfortable assumptions we may have had about the role of gender in this presidential race should have been checked after last Thursday’s GOP debate, when, in a sound byte for the ages, Donald Trump offered this rejoinder to Marco Rubio’s purported attack on the size of his hands: “he [Rubio] referred to my hands -- ‘if they're small, something else must be small.’ I guarantee you there's no problem. I guarantee." Later in the debate, Trump referred to Rubio as “Little Marco.” (“Okay, Big Donald,” was Rubio’s chosen response.) Not since the video of Ted Cruz’s gun-sizzled bacon had voters been treated to such a display of machismo.

In her feminist classic, The Second Sex, Simone De Beauvoir wrote that “a man never begins by presenting himself as an individual of a certain sex; it goes without saying that he is a man.” And yet, even though a man may not “begin” by presenting himself as a man, it may well be that a man runs for President by presenting himself as a very specific “individual of a certain sex.” Trump’s kind of “man’s man” to be exact—a winner and a boss, naturally with the equipment to match—willing to literally belittle his opponent and dismiss powerful women in media (Gail Collins, Arianna Huffington, Megyn Kelly), entertainment (Bette Midler, Rosie O’Donnell), and politics (fellow candidates Carly Fiorina and Hillary Clinton, among others) with casually calculated misogyny. Trump’s courting of male voters with his attacks on powerful women does, at times, seem like a 21st-century version of what critical theorist Eve Sedgwick describes in Between Men as “homosocial” triangles common in nineteenth-century literature--relationships between men mediated by feelings expressed toward or about women (which other academics have described as a forerunner of the “bromance”). In other words: In the 2016 election, we are seeing (among many, many other things) the perpetuation of the idea that there is one right way to relate to—and, indeed, one right way to be—men.

None of this, of course, began with this political cycle. Though it made for memorable headlines (surely seeing “Donald Trump defends the size of his penis” on CNN’s website is one for the record books of presidential historians) and the creation of a Colbert-worthy “Trump Has Tiny Hands PAC,” Trump’s remarks and the subsequent tizzy over masculinity they prompted raise deeper questions about how gender has, in some ways, always gone hand in hand with presidential politics. The “likeability” legacy of George W. Bush as “the candidate you’d want to have a beer with” is still relatively fresh in our minds, but the kind of anatomy-driven toughness and aggression Trump’s attitude most resembles takes us back to presidential candidates of the nineteenth and early twentieth centuries, for whom macho bravado (often wrapped in the trappings of military prowess or all-around virility) ruled the day. After losing the 1836 race to Martin Van Buren and having his masculinity impugned by the opposition as “Granny Harrison, the petticoat general” because he had resigned from the Army before hostilities ended in the War of 1812, for example, William Henry Harrison fashioned his persona as the hero of the battle of Tippecanoe into a slogan, “Tippecanoe and Tyler too,” that he rode to a landslide electoral victory in 1840. (Only to die a month later. The story goes that he insisted on not dressing for the cold at his inauguration—real men don’t wear coats, etc.—and so caught pneumonia.) Teddy Roosevelt, of Rough Riders and “speak softly and carry a big stick” fame, legendarily finished a campaign speech after being shot in the chest in 1912 by an out-of-work saloon proprietor.

Of course, let’s not forget that virility isn’t always an asset; one cannot talk about masculinity in presidential politics without addressing the persistence of sex scandals. From disgraced Virginia reporter James Callender’s later-proven-correct expose of Thomas Jefferson’s illegitimate children with Sally Hemings to the widely-mocked Progressive Era shenanigans of Grover Cleveland and Warren G. Harding to Bill Clinton’s conjugation of “is,” the dark side of macho has been the humiliation of many a male public servant (not that that the embarrassment leaves lasting scars, exactly--even Clinton’s impeachment is now practically a biographical footnote). As much as we want to believe in the take-no-prisoners stance of our most bulldog Commanders in Chief, we also want them to be at least outwardly loyal to their wives. When it comes to being President, somehow it’s far better to be perceived as a warmonger than a cheater.

But as shown by the example of Jimmy Carter, who famously said to Playboy in 1976, “I’ve committed adultery in my heart many times,” there is something worse for a candidate to be than a philanderer, and Trump’s bluster about his manhood puts his (allegedly) tiny finger on it: he can fail the macho test altogether. Late political scientist and Congressional candidate John Orman, in his 1987 book Comparing Presidential Behavior: Carter, Reagan, and the Macho Presidential Style, outlined the characteristics of “macho presidential style”--athletic and sports-savvy, unwaveringly decisive, unemotional, strongly aggressive, not weak or passive, powerful, and a “real man” (read: nothing feminine). As Orman wrote, “all presidents do not fulfill all the demands of the macho myth,” but according to him, Carter’s failure to “project an image consistent with the macho expectations of national political culture in the U.S.” was his downfall.

More recently, in Masculinity, Media, and the American Presidency, Meredith Conroy broke down some of the sexism in how media covers the candidates. In an analysis of what she describes as “gender conflict framing” in print coverage of presidential races between 2000 and 2012, she reveals a propensity for media bias not against female candidates or toward male ones, but rather a bias in favor of the most “masculine” candidates of either gender.

And that, in a nutshell, captures one critical aspect of how masculinity, not feminism, may impact the rest of the primaries and especially the general election. If voters and the media are predisposed to favor the most “masculine” of candidates regardless of gender, how will Hillary’s hawkishness stack up against Trump’s aggressive persona (not to mention his endorsement from the head of NASCAR)?

The ramifications of how perceptions of masculinity ultimately leave their mark on the 2016 race and vice versa will likely be felt outside the halls of political power as well--particularly when it comes to the significance of anger and freedom to how we talk about manhood. Sociologist Michael Kimmel--a central figure in academic men’s studies (not to be confused with its MRA black-sheep cousin, Male Studies), author of Manhood in America: A Cultural History, and founding director of the Center for the Study of Men and Masculinities at Stony Brook University--quotes in a 2015 TED Talk from the first line of an article published in 1915 on the eve of a massive suffrage demonstration: “Feminism will make it possible for the first time for men to be free.”

As it stands, those who Kimmel might describe as the angry white men to whom Trump’s macho persona is so seductive suffer from a failure to recognize how feminism liberates men as well as women. Instead of looking to the dissonance between Paul Ryan’s personal and political positions on paid family leave or to the peer-reviewed documentation (by a Nobel Prize winner) of masculinity in crisis as evidence of how finding common ground might be a path to freedom, they see in Trump a model of macho presidential style that is at once familiar and revolutionary: aggressive, unyielding, and unfazed by the niceties of things like not talking about his anatomy in a nationally televised debate.

From such disparate corners as Jon Stewart and the National Review, it’s been said that America’s id is running for president--and unless something show-stopping happens, he’s likely to be the Republican nominee. In the meantime, contemporary formulations of macho will likely approach it as an opportunity for satire (along the lines of this 2015 Slate video, which comedically describes Carly Fiorina as a “little more testicular” than her counterparts). But whether viewed through the lens of presidential political history or from the perspective of masculinity studies, it’s important to recognize in Trump’s persona the resonances of political manhood past, present, and future. And that perhaps it is time to move toward understandings of masculinity that have nothing to do with carrying around a big stick.