On-The-Ground Conflict Reporting Is More Important Than Ever 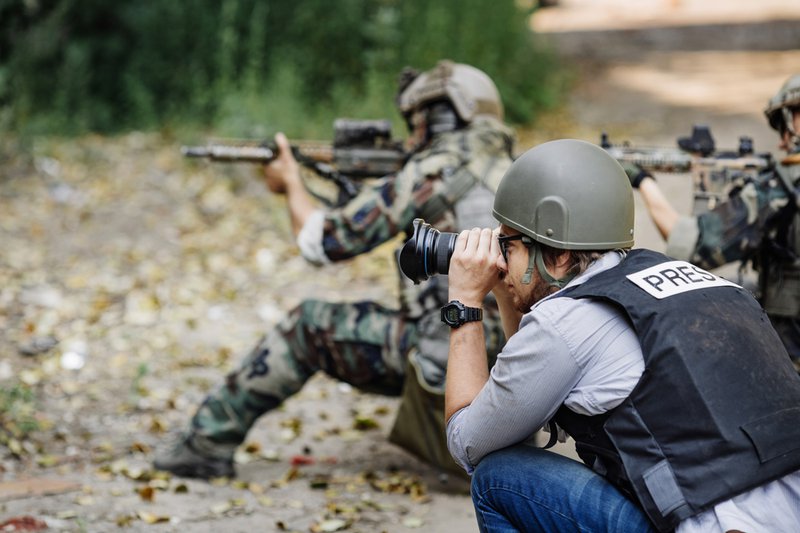 It’s no secret that traditional journalism is on life support. But maybe less considered is the fact that the way we cover war—and how it affects communities—is also in need of a respirator. Why is this so? It’s largely because of the growing danger and cost of covering war zones onsite, coupled with shrinking public interest in some of these conflict areas.

At the same time, our presence, as a country, in the global wars on terror continues to be more and more widespread, as American troops are deployed by the hundreds of thousands in over 150 countries. The fight in Afghanistan, which, at 18 years, is now the lengthiest armed conflict in American history, costs taxpayers some $45 billion annually. The American presence in countries like Niger and Somalia is likewise expanding. As a result, there has never been a greater need for accurate and widely-read reporting on U.S. wars overseas.

But vital on-the-ground storytelling has fallen by the wayside, despite emerging methods of journalism, like crowdsourcing and social media, that make this work more possible. This, in turn, has contributed to a more apathetic and uninformed American public, one with little knowledge of the extent to which military action is fought—and bought—in its name.

This major systemic issue in the realm of conflict reporting was the topic of conversation during the “What Is the Future of Reporting From Conflict Zones?” panel at the 2019 Future Security Forum, a conference hosted by Arizona State University and New America. The panel was moderated by Defense One’s Kevin Baron, who often framed his questions to the three panelists using his own experiences as a longtime DC-based journalist.

He opened the conversation by discussing the difficulty he has faced in his career when trying to recover hostages, alluding to the fact that the job of war reporting has gotten much deadlier in recent years. Globally, five journalists have already been killed in 2019, 250 were imprisoned in 2018, and 60 are still missing.

New Yorker staff writer and New America Fellow Masha Gessen, who covered wars in the Balkans and Chechnya in the 1990s, noted how covering conflict has changed since 9/11. “I witnessed that shift from a discreet era in war reporting … when there was an assumption that reporters in conflict zones were distinctly not combatants,” Gessen said. Just as the lines between civilians and soldiers became blurred during the mid- and late-20th centuries, so, too, have the lines between citizens and journalists, as virtually everyone in combat zones now carries a camera—and maybe a gun—in their pocket.

Thus, accurately covering conflict on the ground requires more time, energy, and resources. And for many news organizations already struggling with all three of these elements, it’s not always worth the time or the risk. Even larger companies, like the Associated Press, have had to turn to funders to bankroll large-scale reporting projects. According to Azmat Khan, who’s a New York Times Magazine contributing writer and a New America Future of War Fellow, this can fuel a “decline in government and military transparency” and accountability. An extreme consequence of this, according to Gessen, is that it can lead to the possibility of “conflicts going entirely uncovered.”

Khan, who won the 2018 National Magazine Award for her work in Iraq and Afghanistan on “The Uncounted,” routinely discussed the issue with the “smaller footprint” of journalism in conflict. An example she cites is that—despite recent upticks in night raids, air strikes, and civilian deaths in the war in Afghanistan—according to Human Rights Watch, “neither the US nor the Afghan governments conducted adequate investigations into airstrikes [so far in 2019] that represented possible war crimes.”

At the same time, Khan also underscored how war is now increasingly being covered via “open-source reporting,” which uses social media, among other resources, to piece together stories—a development that has come with both promise and its own unique challenges.

Indeed, Nick Waters, an analyst for the citizen journalism website Bellingcat, discussed the scale and efficacy of crowdsourced reporting when it comes to presenting a story. Because of ballooning smartphone accessibility, the large presence of social media in daily life, and the seemingly human penchant for capturing the extreme (even if the scene is horrific), information about a major event is often available before reporters are even aware of it. And using tools like geomapping, hyper-analyzed pictures, and tracked serial numbers, a keen journalist like Waters can use what’s publicly available online to put together and verify the details of a story “with such detail that it could potentially be used as evidence in a court of law.”

Think of it this way: Waters and Bellingcat have assembled reports—most recently in Yemen—“at a level of detail that has never really been done before,” and without the physical and financial toll of being in a conflict zone.

And yet, according to Khan, this isn’t enough: “When there are fewer journalists on the ground gathering local context, [you’re] getting reporting that doesn’t prioritize the lives of others.” This comment alludes to the fact that most reports at Bellingcat are collections of facts and numbers, ones with very little emotional attachment.

Waters is aware of this issue, and noted that his work is “always better when it’s combined with traditional journalism.” In fact, Waters doesn’t necessarily view his own work as journalism. According to him, “it’s investigation,” and there’s a meaningful difference between that and storytelling. Still, websites like Bellingcat are so effective that they may take away some of the need for journalists to be on the ground.

And when there are no reporters providing emotional context on the ground, the public tends to care less. Take the fighting in Afghanistan, for example. There are fewer troops on the ground than ever before, but taxpayers have still been paying for stagnant, unreliable, and somewhat unknown progress against the Taliban for almost two decades. Do most Americans know why we’re even there at this point? According to Khan, “most Americans do not care about this war right now.” And if you look at the lack of online buzz around the conflict, she’s correct.

Gessen echoed these sentiments, more specifically pointing out how there’s a disconnect with what people—journalists on the one hand, readers on the other—want from reporting. “People don’t care about facts as a general rule—people care about emotions,” Gessen said. What drives public analysis, voting, and questioning regarding war are stories like “The Uncounted,” which has characters readers can latch onto. In a similar vein, it was stories like All Quiet on the Western Front and The Things They Carried that drove public war narratives in the 20th century.

Looking ahead, it’s crucial that news companies prioritize covering conflict. And to do that, according to Gessen, they need to provide their workers with safe conditions, better pay, insurance, and more transparency. These companies can’t rely on crowdsourced and freelance work alone, since that will likely lead to more reporter deaths and a more detached public.

In its own way, telling stories of war holds the keys to telling stories of history. After all, one of the largest global stories of this past decade, the Arab Spring, came about from an incredible effort of widespread, detailed, and personalized reporting—from both citizen and professional journalists—that has not really been replicated since. In this light, it’s not a stretch to say that news organizations have a moral obligation to tell conflict stories that engage their readers, especially as our wars on terror become lengthier, costlier, and more widespread. For this to happen, though, Americans must first know the full extent of what’s happening.