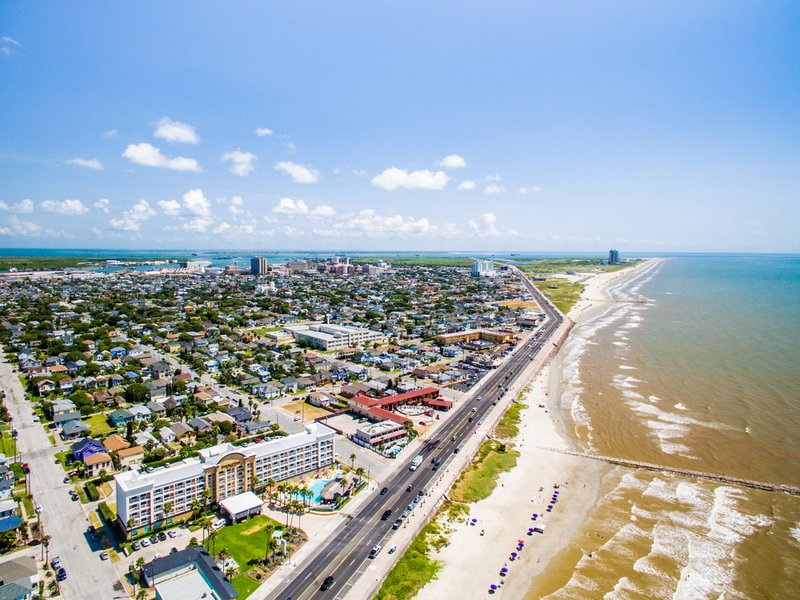 This piece is an excerpt of a Texas Tribune written by New America Weather Eye Fellow Kiah Collier. You can find the full piece here and all our Weather Eye pieces here.

The first time Dutch flood control experts visit Galveston Island, they are always shocked to see homes and businesses perched next to the water — no levees, dunes or gates of any significance to guard them.

“In the United States, it’s like, ‘I want to have a view, I want to see the sea from my house, so I’m going to build on the beach,’” said Jeroen Aerts, director of the Institute for Environmental Studies at Vrije Universiteit Amsterdam. “It’s completely different in the Netherlands.”

Many Dutch officials say that mindset reveals the biggest differences between the countries: Americans are more self-reliant — and their property is most often insured — so federal and state government focus on emergency response and cleaning up after a natural disaster much more than preventing the damage.

But with so much at stake on the Texas coast — millions of lives, billions of dollars worth of property, and many of the nation’s biggest fuel and chemical producers — some state officials have pushed to break that mold.

In a worst-case scenario hurricane, storm modeling shows that part, if not all, of the facilities lining the Houston Ship Channel would be inundated, along with hundreds of thousands of homes and businesses and the Johnson Space Center, home to NASA. And as the climate warms and the population grows, scientists warn, the threat of such a hurricane is becoming greater.

“Sea level is rising, the storms are getting larger, and the clock is ticking,” wrote Jim Blackburn, co-director of Rice University’s Severe Storm Prediction, Education and Evacuation from Disasters Center, in a recent white paper.

Over the years, Blackburn also has hammered that the impact of a worst-case storm on the industrial complex — in addition to economic calamity — could lead to one of the biggest environmental disasters in U.S. history. Storm modeling shows that a major surge could impact thousands of industrial storage tanks near the Houston Ship Channel that hold crude oil and hazardous chemicals; if even one ruptured, scientists say, the toxins could inflict irreparable harm on Galveston Bay, one of the region’s most productive estuaries and a national ecological treasure.

To help prepare for that storm, scientists and graduate students at A&M at Galveston and Rice have spent years studying a country that was unprepared for its own worst-case scenario six decades ago.

It was about 5 a.m. on Feb. 1, 1953, when two of Mina Verton’s cousins banged on the front door of her family’s stone farmhouse on the rural island of Schouwen-Duiveland in the southwestern Netherlands. It had been storming all night. Surges had breached nearby dikes, they said, and the island was sure to flood.

The home had been inundated during a dike breach before, during World War II, when the Nazis bombed Dutch flood defenses as the country resisted occupation. The water had topped out at about a foot and a half then — and that’s what they expected would happen again.

But when it finally arrived, the icy water quickly blew past that point. In less than an hour, it swallowed the ground floor of the house and moved on to the second. The family climbed out windows onto the roof. It was freezing cold and still raining.

At around noon, terrified neighbors began to float by on scraps of wood. The family thought they were safe on the roof, but their sturdy stone house eventually gave way to the strong current.

They partly jumped, partly swam, to the roof of a nearby storage shed, which soon broke apart; Verton, her mother and sister were on one piece, her father and brother on two others.

“You could hear people drown,” Verton said through a translator.

Verton, then 12, held her 5-year-old sister in her lap and prayed. They floated on the scrap of roof for another 24 hours, until it bumped into a still-standing dike that they wearily climbed onto.

In the end, 1,836 people lost their lives. Verton lost her brother, grandmother, several aunts and uncles, and a cousin. Her grandmother was never found; she was either swept out to sea or buried as an unidentified victim.

When they finally returned to the island more than a year later, there was nothing left of their farm.

No one talked about the disaster for decades after, including Verton. That was in part because it was so traumatic, but also because many people in the region, part of the country’s “bible belt,” viewed the flood as the hand of God.

But a hydraulic engineer had actually warned of the likelihood of such a tragedy.

In fact, just a day before the storm hit, Johan van Veen presented a plan to his superiors at Rijkswaterstaat — the Dutch equivalent of the Army Corps of Engineers — to fix the aging dikes in the region. His warnings had gone unheeded for some 15 years amid the Great Depression, which had started in the U.S. before battering Europe, and World War II.

“The ’30s and the ’40s weren’t exactly years you would think about doing something extra — staying alive was number one,” said Stive, the hydraulic engineer at the Delft University of Technology.

The disaster was a huge blow to the reputation of Dutch hydraulic engineers, who fancied themselves the world’s leading water wranglers. In 1920, they had broken ground on a long-envisioned public works project that wielded new technologies to guard thousands of acres of vulnerable coastline in the northwest, create a freshwater lake and reclaim hundreds of thousands of acres from the sea for agriculture and development.

In a 2006 essay, Dutch social scientist Cornelis Disco explained the national dismay that followed the flood’s devastation: “That the Netherlands should have been so unprepared for such a devastating storm surge did not fit the image of the nation as indomitable master of the flood.”

Three of Europe’s major rivers run through the heart of the Netherlands — Dutch for “low country” — on their way to the North Sea, and a fourth snakes through the country’s far north. Along its 280-mile coastline, the notoriously stormy sea is capable of hurling deadly swells into the country for days at a time.

The first dikes were built in the Netherlands in the early Middle Ages by wood-clog-wearing settlers keen on farming the soggy but fertile delta.

Eventually local water authorities took over construction and management of the country’s growing flood control systems. They were the first democratically elected institutions in the Netherlands — some say the first in Europe — and they spent centuries creating a vast network of dikes and canals, along with thousands of the now-iconic squat windmills to pump water through them.

The country’s geography has been transformed over the centuries as the sea has swallowed and spit out land at will, and the Dutch have clawed much of it back. By surrounding submerged land with dikes and pumping out the water, the Dutch created hundreds of thousands of acres of farmland and set the stage for a country that’s about 16 times smaller than Texas by square mileage to become the world’s second-largest exporter of agricultural products after the United States.

But the dikes didn’t stop the North Sea, which regularly unleashed devastating floods that have drowned thousands of Dutch citizens.

As early as the 17th Century, hydraulic engineers envisioned large-scale public works projects to shield the country from the sea. But the technology didn’t exist to pull it off. That changed early in the 20th Century with the Zuiderzee Works, which brought the construction of major dams and dikes to the northwestern part of the country. Its most iconic component was the Afsluitdijk, a 20-mile-long causeway that severed the Zuiderzee, a large, shallow bay, from the Wadden Sea. The Afsluitdijk, which remains a point of Dutch national pride, was completed in 1932 and turned the Zuiderzee into a freshwater lake that remains one of the Netherlands’ largest drinking water supplies.

The Zuiderzee Works put the Dutch on the map as innovators in storm management and made the knowledge of the country’s hydraulic engineers a valuable export. But it wasn’t enough, and the ‘53 flood proved that.

They needed to respond in a big way, and quickly.

“God created the earth, but the Dutch created The Netherlands.”

Just two weeks after the flood, a new entity called the Delta Commission convened to hatch plans for what would become the country’s largest flood defense system. It would be expensive — a tough sell in a country still reeling from the war — but the commission vowed that it would stop flooding for good.

Thanks to van Veen, the engineer who had warned of the country’s vulnerability to flooding, the commission had rough blueprints. But it ultimately went beyond those plans, constructing three locks, six dams and five first-of-their-kind closable storm surge barriers made of metal and concrete. They effectively sealed off the entire southwestern coast, ground zero for the ‘53 disaster, blocking storm surges from entering the inlets where the Rhine, Maas and Schelde rivers emptied into the North Sea.

By the time the Dutch finished the Delta Works, 44 years after the disaster, they had accomplished something the International Federation Engineers declared “the most prestigious hydraulic engineering project in the world.” Two of the projects were declared national monuments.

The Delta Works, which cost upwards of $11.4 billion in today’s dollars, became part of a 2,300-mile system of natural and manmade barriers that now corset the major rivers, lakeshores and sea and guard 100 percent of the Netherlands’ coastline. Another 8,700 miles of barriers sit inland. Without them, more than 60 percent of the country would flood every day.

At some point during all of this, a saying emerged: “God created the earth, but the Dutch created The Netherlands.”

Today, only about 100,000 of the country’s more than 17 million citizens don’t live behind some kind of flood barrier, and they’re responsible for repairing any flood damage to their property. Everyone else who lives behind the dikes must be made whole by the government if their homes are ever inundated, something that’s only happened once since 1953, when a drought-weakened dike burst in 2003 and flooded hundreds of homes.

“Any [flood] impact, in their minds, is failure,” said Samuel Brody, director of the Center for Texas Beaches and Shores at Texas A&M University at Galveston, one in a team of researchers that has traveled to the Netherlands to gain flood control wisdom it has incorporated into its own proposed Houston-Galveston coastal protection system.