Dreams That Haunt Afghans the World Over 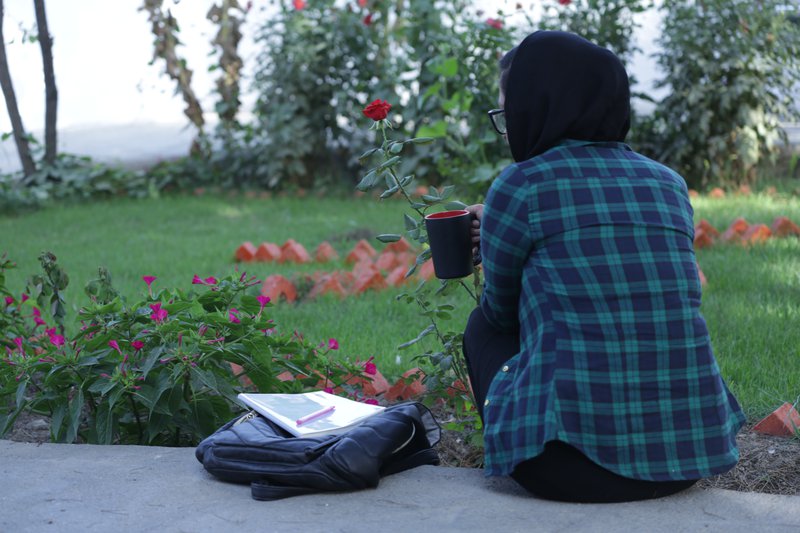 The seasons are changing in Kabul. Days after an attack on the American University of Afghanistan killed 13 and wounded at least 45, thunder echoes across the mountains. Roses flourish along roads that too often run red with blood. The wind whips the fruit trees and purple figs fall, hitting the ground with a pop along with the first drops of rain. Thunder and thousands of drops. Rolling and splashing the chaos of the city quiet.

Roya Ramen, 23, sits in our office’s yellow-walled safe room, a 30-minute drive from the university, reliving the story of the longest night of her life. Her today is better than yesterday, and yesterday better than the day before. It was the second day of fall semester classes. Syllabus review, new textbooks, a whiteboard and rows of desks—Finance 200 was going exactly as it should, until it wasn’t. As the evening call to prayer sounded through Kabul’s dusty streets the class heard the pop of gunfire—not an unusual experience in Kabul, but tonight unusually close. Then the air warped, threw Roya across the classroom, shattered the windows. An explosion, Roya understood. The power cut out, throwing the classroom into the light of quickly deepening dusk.

As city residents followed sickening updates on the attack through Facebook and phone, two men in white salwar kameez entered the classroom, shooting. Roya dropped to the floor, where a classmate, Mujtaba, lay, blood appearing from his hairline. Students clapped hands over their mouths to avoid shouting. Mujtaba gasped, groaned, then became slowly quiet, turned absolutely still. The two men with guns paced the room, speaking in Pashto into their Nokia phones. Roya lay shaking under a table with five other breathing students and Mujtaba’s still-warm body, which slowly cooled to the summer night’s 70 degrees and dripped blood that soaked her black Converse sneakers, stuck her arm hairs into clumps, and clung to four dainty silver bracelets on her left arm. It glimmered in the light of cellphones the students dared to illuminate briefly to check in with loved ones and mark the time. As a native Dari speaker—a dialect of Persian—Roya doesn’t speak Pashto fluently, but she could understand: We’ve killed around 200 people. I will just pray, and after praying I will blow myself up in this room. Those students who are not dead, will be.

The American University attack comes at a time of great uncertainty for Afghanistan’s future. The Taliban control the majority of districts in some provinces, and infighting in the National “Unity” Government, brokered by John Kerry in 2014, means that it’s front-page news for the country’s top two leaders to meet. In an ethnic tension-fueled standoff over the reburial of King Kalakani, the First Vice President’s private security force carried RPGs unchecked through central Kabul city just last week. Against this bleak backdrop, the American University is an iconic symbol of hope for Afghanistan, which has one of the youngest populations in the world. The attack marks the second soft, or non-military, target in a month and a half, coming on the heels of an ISIS attack in late July that targeted a group of peaceful demonstrators. These soft target attacks carry extreme emotional significance, hitting the psyche of the Afghan public in a way military targets do not.

For 35 years, insecurity in Afghanistan has stretched Afghan lives into day-by-day. It’s difficult to plan for a future you don’t have confidence will exist. Those last moments for Roya started at 10 PM, or maybe it was 11 PM, but either way they stretched. The seconds were forever, one heartbeat an hour, one hour a lifetime, and then the students—more than 50 in the classroom and hundreds across campus—lived lifetime after lifetime as they waited for this one to end. The men paced the lecture hall and the students whispered. Roya helped shift the dead body to make room for the live ones. The long seconds were interrupted only by pacing of the two men, the sound of clicking guns. Constantly checking their phones against the impossible slow passage of time. 8:30. 8:31. 8:32. An infinity later, 8:35. But they were bearing witness to the passing of time. They were still alive.

“We knew they will kill us,” Roya says, voice unwavering. “We just didn’t know when.” Girls recited verses of the Quran, others cried, one boy snored. “I’m sure that these terrorists won’t kill me, but your legs will kill me definitely,” the boy next to her joked. “I said, bro just give me some space!” Roya smiles. “We were all going to die, but we had to cheer ourselves,” she says. She told the girl next to her, “just close your eyes and sleep.” That way, either the Special Forces would finally come, or they would go straight to heaven.

Periodically, someone lost hope. A pregnant student stood up. The men shot her. She fell down, and then it was quiet again. Some girls ran to the third-floor window. Shots. They fell down and it was quiet again. Deathly quiet except for the noise. “We can hear the sound of the ambulance, we can hear the police cars, but why aren’t they coming inside?” Roya says. “It goes from 7 to 8, 9 to 10, but why nobody is coming to save our lives?”

After every attack, Afghans mourn the world forgetting their country. International media reports read like cardboard, publishing western-centric reports on casualty tolls—CNN’s report on the American University attack read "Despite its name, few Americans study at the school," insinuating that a life is not a life. As Europe charters planes to send refugees home and the Afghan government fails to provide security to its citizens, Afghans mourn the world’s battle fatigue of their country’s future—a fatigue they have experienced a hundred times over, but cannot so easily escape. After an attack, social media feeds fill with desperation. “I feel like the world couldn’t care less about Afghanistan,” wrote one presidential palace employee on Facebook. Another Afghan posted, “...and life goes on, such that the death of 12 and injury of 40, last night at American University of Afghanistan is forgotten, like many other tragedies? Such is this country!”

Roya, too, passed the hours thinking about forgetting. What will her colleagues do without her, or the 30 former street children she has worked so hard to enroll in school, calling them “my kids.” If she died, who would tease her sister that their mother loves her more? She wouldn’t exist, so definitely her mom would love her sister more, she figured. For Afghanistan, it has been 35 years of war and millions of broken hearts, broken souls, broken lives. For Roya, it was sweat and blood and thoughts like this, and it was all night. On Facebook, reported from softly glowing cell phone screens, updates that everything was under control. “We are still in the classroom, they are moving around us, how is everything under control?” Roya thought. “Maybe they just forgot about us, or maybe they don’t want to save us.” A text message that they wouldn’t be rescued until morning. The students were shocked. With morning comes dawn, with sunrise comes light. With light the men would see them. “We didn’t want that sunrise,” Roya says.

But before dawn, and even before death: footsteps on the roof. “After eight and a half hours, we heard the sound of hope.” A firefight. Explosions. At 3:40, her iPhone died. Darkness. Gunfire. A police officer entered the room. In previous attacks terrorists have worn military and police uniforms. “Prove you are here to save us,” the students insisted.

Dawn. In the car home with her brother, the sun illuminated the blood and after a night of dry eyes, Roya sobbed. It’s alright, it’s alright, it’s over, her brother said. She pleaded to go to the hospital to see the injured. “Everything is over for me, but what about the injured?” she said. What about Mujtaba? “Just look at his blood on my hands.” The hospital, please, the hospital. It’s not over just because it’s over for me.

Instead, they went home. She comforted her mother. “I’m happy, you can see Mom, I’m fine. Everything is okay. No one is injured, no one has died there, everyone was happy.” But she felt blood around her, everywhere. Her mother poured her a glass of milk. “Trust me that milk was looking like blood to me.”

Finally, her bedroom, air conditioning, sleep. But with sleep, dreams—dreams that haunt Afghans the world over. Bombs in sleep, and with consciousness, uncertainty. “I was checking my mobile to see who is alive,” she says. She worried that the men with guns would be outside her home. The corpse of one of them—white salwar kameez stained with blood as the survivors filed out of the classroom—etched in her mind.

“Pretend it was a dream,” her brother said. “Behave like a brave and strong girl,” her sister said. “Don’t be weak, don’t cry.” So she went to the living room, met visiting relatives, colleagues, friends. Talked, but doesn’t remember what she said. Her colleagues welcomed her back to work. She found normal again. “I don’t even have a single scratch on my body,” she said. “I could see everything was going perfect.”

After the American University attack, many in Kabul seem broken. Laptop screens are closed early, giving up on the day. Coworkers, friends, patriots ask: “how many times?” and laugh grimly together. Doors slam and the city jumps, then sighs. Too much freshly turned dirt in graveyards, too soon. The American University has pledged to open, but two weeks later, no date is set. Afghanistan’s today is better than yesterday, and yesterday better than the day before. Thunder echoes, the seasons change. Roya doesn’t have a single scratch on her body. And from soil that’s been powdered with bomb dust for 35 years, the roses still grow.