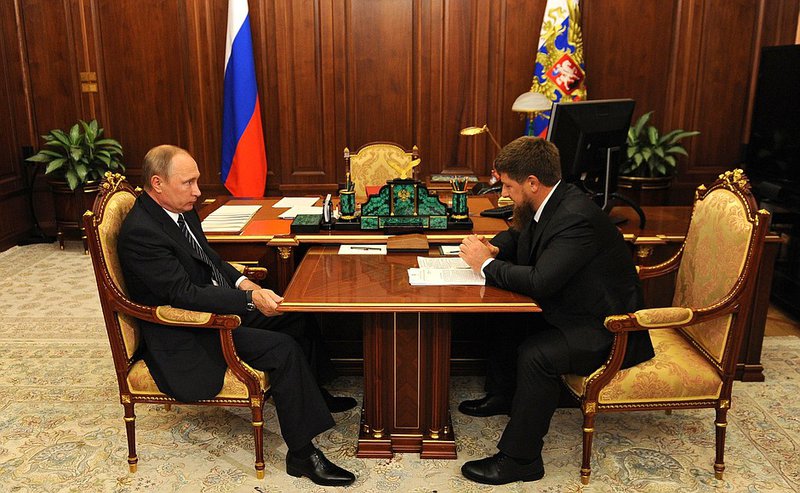 Right within arm’s reach of Vladimir Putin and his authoritarian rule over Russia is another, perhaps unfamiliar dictator: Ramzan Kadyrov, the head of Chechnya, a long-contested federal republic of the Russian Federation. Kadyrov has been accused of human rights abuses and war crimes—and most recently, he’s turned his corrosive gaze to the LGBTQ community.

Recent reports from Chechnya indicate that officials are rounding up, torturing, and killing Chechen men suspected of engaging in homosexual activity. At least 100 men have been detained over the past several weeks, and it’s been reported that Kadyrov hopes to “eliminate” the republic’s gay and bisexual citizens by the beginning of Ramadan on May 26. According to released prisoners, the men are kept in a shed where they're beaten, starved, and tortured with electricity. In addition, they're probed for information, and their social media is searched to find links to other gay men for the militia to round up. One prisoner reported that, after days of torture, the men’s families are summoned and told to kill their detained relative in order to restore honor to the family—and if the family won’t do the killing, the militia will.

Yet Kadyrov’s anti-gay pogrom is the latest manifestation of a larger climate of repression in the region—one inextricably linked to Chechnya’s murky relationship with Russia.

The rights of LGBTQ Russians have been under attack for the past decade. As conservative Christianity has grown more popular in the de facto atheist country, good will toward LGBTQ citizens has waned. In 2013, Russia passed a law criminalizing materials that would supposedly normalize homosexual relationships. More recently, the Communist Party introduced a law to the State Duma that would punish with fines and arrest those who publicly express homosexuality (the law was rejected). This growing invective of intellectualized discrimination in the public sphere has only fueled extralegal violence against the LGBTQ community, a situation made worse by the fact that human rights abusers are often free to act with relative impunity.

The relationship between Putin and Kadyrov is symbiotic. While the Kadyrov family fought against the Russian Federation in the First Chechen War, by the second iteration of the war, the family had sworn allegiance to Moscow and was used by Putin to bring Chechnya into the Russian fold, with Putin having essentially created a tinderbox of a climate where he keeps Kadyrov happy to stem another Chechen separatist movement. Now, Chechnya is under Russian control, but it receives some 85 percent of its funding from the federal government, and Kadyrov is allowed to raise and manage large amounts of money in an opaque slush fund. Kadyrov also commands an unofficial militia of 20-30,000 troops loyal to him, not to Moscow, though he seems willing to loan them to Putin for dirty jobs—they’ve been linked to the invasion of Ukraine and to the assassination of Boris Nemtsov, one of Putin’s chief critics.

Of course, Kadyrov doesn’t always do what Russia wants, or what Russia says it wants. In 2010, for instance, he condoned a campaign to shoot paintball guns at women not wearing headscarves in Muslim-majority Chechnya. In 2014, his troops burned the homes of families of suspected terrorists, despite Putin’s statement that “everyone must obey Russian law […] even the Head of Chechnya.” And now, a paramilitary force is putting LGBTQ Chechens into “concentration camps,” despite the fact that homosexuality, at least technically, is legal throughout Russia.

When questioned by Russian news agency Interfax, Alvi Karimov, a spokesperson for Kadyrov, stated, “There are no homosexuals in Chechnya. You cannot detain and persecute those who do not exist.” He went on to explain that because of Chechnya’s conservative values, that if such people existed in the republic, law enforcement wouldn’t need to discipline them because their families would have already “[sent] them somewhere from which there is no returning.” Amid very public controversy, Putin summoned Kadyrov to Moscow for a meeting on April 19. The meeting’s official record was released and shows that Putin asked Kadyrov about the “alleged” human rights abuses and that Kadyrov denied them.

Yet as Human Rights Watch has pointed out, this meeting and the subsequent release of the meeting’s minutes were, quite possibly, conducted so that Putin could show due diligence and plausible deniability in response to questions from activist groups, all the while leaving Kadyrov unfettered—free to do what he pleases. Indeed, in recent weeks, the Kremlin has stood by the Chechen ruler in denying that the purge is taking place, even though the treatment of protestors backs up the claim that Moscow is complicit in Kadyrov’s actions. On May 1, for instance, during a labor celebration, some 20 LGBTQ activists were detained in St. Petersburg.

This mushrooming chaos in Chechnya has triggered a key question: What role ought international actors play in pursuing justice in the region?

International activists and leaders are pressuring Putin to put a stop to this organized violence against gays. On a recent trip to Russia, German Chancellor Angela Merkel urged Putin to use his influence to protect minority rights in his country. In a statement released on Friday, former US Vice President Joe Biden pressed the Trump administration to take action in Russia, saying, “When faced with such crimes of hate and inhumanity, it is the responsibility of every person of conscience to speak out—to oppose this campaign of violence before it continues further.”

The Trump administration has been silent on Chechnya’s anti-LGBTQ pogrom. This shouldn’t come as a surprise, considering the new president’s own actions around LGBTQ issues and his oft-demonstrated disinterest in taking Russia to task on issues of rule of law. But perhaps most concerning in light of the crisis in Chechnya is the Trump administration’s refugee policy. In 2011, the Obama administration issued a memorandum to aid LGBTQ refugees seeking safety. The current administration, however, seems to want to throw the United States into a period of retrenchment. So while it sorts out whether, and from where, it will accept refugees, LGBTQ or not, men are fleeing Chechnya en masse, desperate for asylum outside of Russia’s borders.

Will international actors take a stand, acting as a moral voice? Or will they turn their backs, leaving gay Chechens as the latest casualties of a tenuous bond between two autocrats?