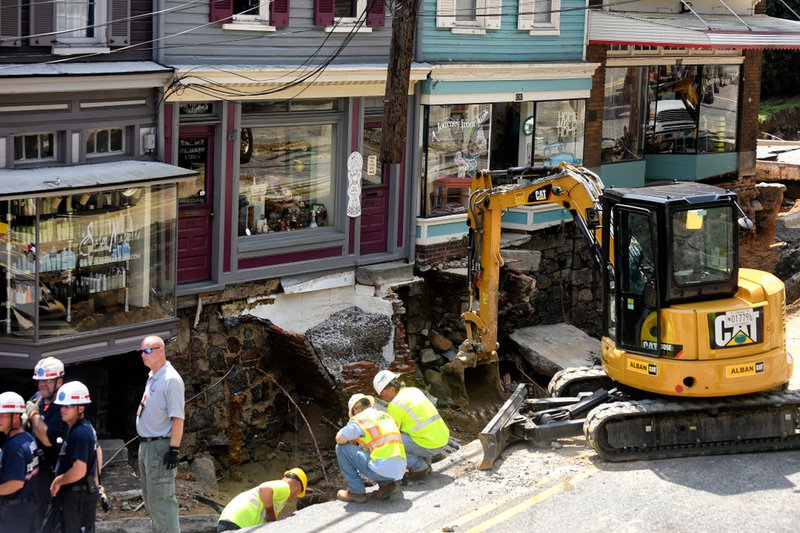 In June 2016, a so-called 1,000-year flood struck Ellicott City, Md., inundating the historic Main Street with overflow from the nearby Tiber Branch stream, killing two residents, and ruining businesses in its wake. Then, in May 2018, it happened again. A second catastrophic flood swept through downtown, destroying recently reconstructed buildings and claiming another life.

Since then, the government of Howard County, where Ellicott City is located, has secured millions in federal and state funding for its EC Safe & Sound plan, which aims to mitigate future floods by stabilizing endangered buildings and constructing drainage tunnels and storage ponds to safely contain floodwater. As climate change makes extreme weather events like the Ellicott City floods much more frequent, states and local communities across the country have had to develop similarly ambitious new policies and investments. But though governments and businesses must choose to implement the technologies, regulations, and best practices needed to avert climate catastrophes, the work of transitioning to clean energy, safe cities, sustainable food systems, and green infrastructure can only be carried out by human hands.

No matter how well-funded or ambitious, policies to address climate change will stall if they do not include education and workforce development strategies that provide workers with the skills needed to mitigate global warming and build climate resilience. Green workforce development depends first on accurately identifying the jobs and skills needed to address climate change, and second on developing and adequately investing in high-quality, accessible training that prepares workers for needed roles and connects them to job opportunities.

What is the Green Workforce?

“Green Goods and Services” (GGS) occupations, according to the Bureau of Labor Statistics (BLS), are those in “industries that produce goods or provide services that benefit the environment.” This definition of green jobs is intentionally broad. Green jobs comprise a wide array of occupations, including both emerging new roles and well-established “greening” (or “indirectly green”) jobs that incorporate new environmentally focused skills and tasks.

The solar and wind power industries provide good examples of emerging green jobs. Although modern solar and wind power technologies have existed since the 1970s, they were not cheap enough to use for public utilities until the 1990s, and BLS only began publishing data about solar panel installers and wind turbine technicians in 2012. The number of American workers in each occupation has more than doubled since then, to nearly 12,000 and nearly 7,000, respectively, in 2021.

On the other hand, many essential green jobs have been around for centuries. Betony Jones, a senior advisor at the U.S. Department of Energy (DOE), noted in a recent webinar that plumbers, pipefitters, electricians, operating engineers, and workers in other traditional skilled trades will be just as important to climate change mitigation as those in “new” occupations. In fact, established occupations in construction, manufacturing, and utilities make up a far larger share of the green workforce than emerging jobs.

Effective climate workforce strategies depend on an understanding of the number and growth of green jobs as well as clarity about the skills needs of individual occupations. Without careful strategic planning, newly designed training programs could be too small — leading to workforce shortages — or too large, leaving trainees with scarce opportunities to apply their new skills.

Estimating the combined number of emerging and existing green jobs is currently a major challenge. BLS’s GGS program was eliminated in 2013, just three years after it began. DOE, academic researchers, private labor market firms like LinkedIn and Emsi Burning Glass, and states such as New York produce important analyses about the size and growth of green workforces, but effective, systemic national strategies to support green workforce development may remain out of reach without the more comprehensive data that GGS used to provide.

Luckily, state and local practitioners are already leading the way with programs focused on parts of the green economy. And though the current lack of data would make a national green jobs plan difficult to execute, ongoing projects and the recently proposed federal budget reveal opportunities for building our green workforce development infrastructure in the near term.

The work of transitioning to clean energy, safe cities, sustainable food systems, and green infrastructure can only be carried out by human hands.

Apprenticeships are one of the best options for supporting green workforce development, and green apprenticeships got plenty of attention during the Obama administration, including a U.S. Department of Labor-authored landscape scan in 2009 as part of the American Recovery and Reinvestment Act (ARRA). Important new opportunities have emerged since then, including for solar installers and wind turbine techs, as Richard Lawrence of the Interstate Renewable Energy Council wrote recently. Companies like Siemens and Duke Energy, which already provide energy sector apprenticeships, could model best practices for new programs focused on emerging occupations in battery storage and microgrid technology, for example.

The advantages of apprenticeship in green workforce development are twofold. First, apprenticeships are already well established in many greening skilled trades, like plumbing and electrical, allowing environment-focused employers to build on existing training standards. Second, because apprenticeships only exist where employers are willing to pay wages throughout training, they’re also necessarily aligned with employer demand. Apprenticeships help avert the risk of training for jobs that don’t exist, which has been recognized since the ARRA era. What’s more, when built around community benefit agreements, they can ensure that local community members, including historically marginalized groups, can take advantage of green work opportunities.

But although several TAACCCT grantees included green workforce development in their proposals, the efforts were sparse, difficult to sustain, and did not seem to change employer or consumer behavior. Current legislation would authorize additional capacity-building efforts at community colleges. This time around, we have a chance to facilitate green job growth while positioning community colleges as centers for green job training in communities of all sizes and shapes across the country.

Public workforce systems also have an important role to play in providing jobseekers with access to a variety of training options to enter green careers, including apprenticeships, community college coursework, and industry certification programs. States can leverage their public workforce systems towards green objectives, as California has done with its High Road Training Partnerships. And at the federal level, $100 million in President Biden’s recently proposed budget would go to the POWER+ initiative to support job training for sustainable industries in communities transitioning away from fossil fuels.

Starting Back on the Long Road to a Green Economy

Green jobs have been a topic of discussion among workforce development professionals for well over a decade. Though some promising first steps in the Obama era did not survive post-recession austerity, the increasing frequency of natural disasters and growing recognition of an impending systemic crisis point to a new opening for green workforce policy. Time is running out to turn urgency into action. But with the right strategic guidance, better labor market information, and sustained investment, American systems of higher education and workforce development can prepare the way to a greener future.

Climate Security: Building a Community of Practice (Resource Security, 2021): There is consensus that climate change is a geopolitical risk. It’s one thing to build an instability accelerant, but it’s another to actually build climate security. In this event, we discuss the state of the climate peace and security community, focusing on decision support tools and best practices.

Heat Map: A Climate of Change in America (Future Tense, 2020): Fossil fuels that power our economy present a significant challenge for America’s present and future. With ASU’s Ten Across initiative, we analyze stories from those confronting this challenge on a daily basis to decipher how to address long-term climate threats without harming today's economy.