The Sequester, the Pentagon, and the Little Campaign that Could 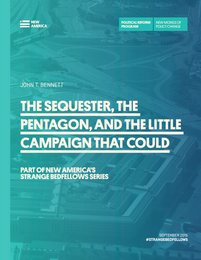 Today, New America’s Political Reform Program released the second in a series of papers from the New Models of Policy Change Project examining how “strange bedfellows” coalition building between the most liberal Democrats and conservative or libertarian Republicans is shaking up policymaking across the country. In “The Sequester, the Pentagon, and the Little Campaign that Could” author John T. Bennett examines the unlikely political coalition that helped secure a drop in defense spending steeper than any since the end of the Korean War—and that has stymied every effort to lift sequestration since.

A unique political shift caused by the advent of Tea Party conservatives enabled this unexpected change in spending through the automatic federal budget cuts known as the “sequester.” The cuts—and especially their undiscriminating approach to reducing military outlays—have proven unexpectedly durable. Carefully nurtured, behind-the-scenes cooperation between liberals and Tea Party conservatives does much to explain why.

“Once groups on the left and right sides of the aisle realized they shared the same goal of reduced defense spending, the door was opened to building an unlikely—but effective—alliance,” said report author John Bennett. “Building trust between diverse groups is key to finding sustainable policy solutions.”

The report forms part of a “Strange Bedfellows” paper series, led by the New Models of Policy Change Project in New America’s Political Reform Program. The series examines how new policy ideas emerge from unlikely corners of the right or left, and find allies on the other side who may come to the same idea from very different worldviews—a “transpartisan” approach. The successes, failures and key figures of this transpartisan approach to policy change will be explored over four case studies in criminal justice reform, Pentagon spending reduction, climate change and “climate care,” and opposition to Common Core education standards.