Parallel Play in the Education Sandbox

The Common Core and Politics of Transpartisan Coalitions 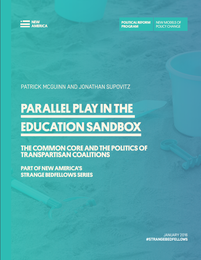 A new report from New America peels back the curtain on how Common Core, developed by a centrist, bi-partisan coalition, unexpectedly became one of the most contested education policy issues since No Child Left Behind.

In “Parallel Play in the Education Sandbox: The Common Core and Politics of Transpartisan Coalitions,” authors Patrick McGuinn, Drew University, and Jonathan Supovitz, University of Pennsylvania, offer a detailed post-mortem of the unlikely alliance of political polar opposites against Common Core.

“The Common Core standards ignited opposition from both the political left and right and hinted at the prospect of a transpartisan coalition united behind repeal,” said Dr. McGuinn. “But the two sides had very different reasons for opposing the Core—and very different visions for education policy more generally—and this ultimately prevented conservatives and liberals from working together and coalescing around a shared vision of what should come next. In the final analysis the opposition to the Common Core produced more symbolic victories than meaningful changes.”

Heather Hurlburt, director of the New Models of Policy Change Project at New America, added, “This case study shows the oppositional power of groups on the left and right aligning around a goal—remove or replace the Common Core—and a set of social media tools. At the same time, the groups’ lack of investment in coordination or joint agenda placed profound limits on what they could achieve, even as they seemed to turn the initiative upside down.”

The report forms part of the Strange Bedfellows paper series, led by the New Models of Policy Change Project in New America’s Political Reform Program. The series examines how new policy ideas emerge from unlikely corners of the right or left, and find allies on the other side who may come to the same idea from very different worldviews—a “transpartisan” approach. The project has explored successes, failures and key figures of this transpartisan approach to policy change over four case studies in criminal justice reform, Pentagon spending reductions, climate change, and opposition to Common Core education standards.