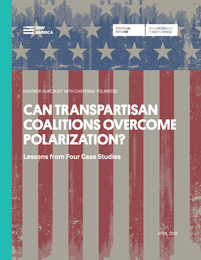 Heightened partisanship, declining confidence in institutions, and the rise of issue polarization have taken a toll on decades-old models for promoting policy change through centrist bipartisan coalitions. With traditional paths of policy entrepreneurship and compromise blocked, new ideas are not finding their way into the system, and outdated policies and structures are not being replaced.

The New Models of Policy Change project at New America studied one model which is producing interesting policy change at the local and national level: transpartisanship.

In a transpartisan approach, coalitions are not built outward from centrist political elites. Rather, policy proposals are championed by unlikely allies from the right and left, who may have very different ideological justifications for the same policy. Policy entrepreneurs recruit political endorsers from one or both sides. Thus, ideas are validated as legitimately liberal, progressive, conservative and/or libertarian—not as a watered-down-compromise among ideologies—before they reach the legislative fray. Allies and supporters can then be recruited from multiple factions without compromising their core ideological stances.

The New Models of Policy Change project studied the successes, failures, and key figures of this emerging approach to policy change. It produced a set of four case studies (criminal justice reform, Pentagon spending reduction, climate change and "climate care," and opposition to Common Core education standards) identifying the circumstances under which the transpartisan approach can flourish, as well as those under which it falls short. These are the lessons we learned.