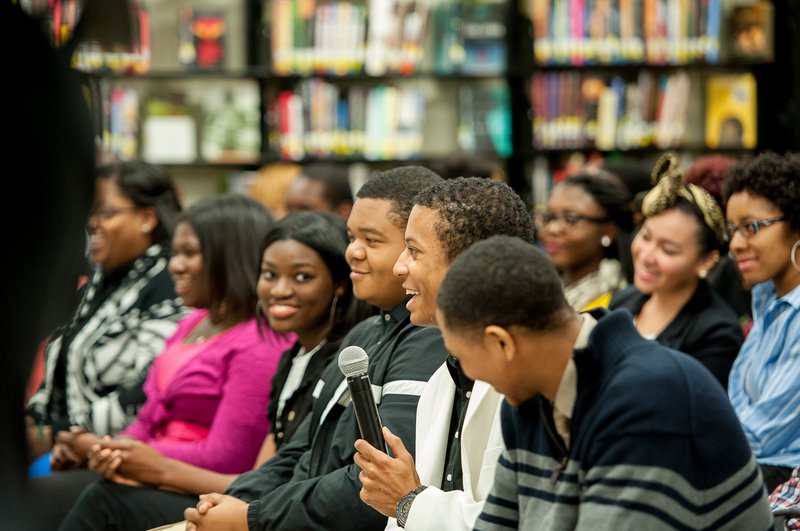 “We have a powerful potential in our youth, and we must have the courage to change old ideas and practices so that we may direct their power toward good ends.”

These words are by the indomitable race woman, Mary McLeod Bethune. A lion among men and women, she dedicated her life to building learning environments for Black children to dream wildly their greatest ambitions. As a social worker, I have always thought of my research and community activism as working in the legacy of Mary McLeod Bethune, who could figuratively lift her finger in the changing American winds and divine the proverbial coming storms, droughts, and seasons of plenty for Black youth and black communities. And, with this knowledge, she would set herself to the task of welding and cultivating worlds of opportunity, to mark the coming season --the changing season -- for those whose skin denied them every inalienable right. With this sense of discernment, she, first, founded a school for little Black girls, and then she founded a historically Black college and university (HBCU), Bethune-Cookman College. You see, Mary McLeod Bethune saw the writings on the wall and responded with urgency and intentional haste to build a legacy of learning for Black students.

And, with this same sense of divining the times, I, too, move with a sense of urgency and intentional haste to help solve the question of why there are so few Black students majoring in STEM and the computational sciences. My solution, like Mary McLeod Bethune’s founding of school systems, is about honoring the dreams and ambitions of Black students by centering their vocational interests and choices around the discussion of tech employment. For instance, we know Black students choose low-earning, but community empowering majors and careers such as counseling, social work, and community organizing.

Of course, these choices are not wholly motivated by altruism, but also by the fact that these students often come from chronically underfunded public schools that often track Black students into rudimentary math courses instead of STEM-related Advanced Placement courses. This forces students into majors that aren’t focused on math or STEM. Though Black youth must survive many “leaky tech pipeline” barriers such as stereotypes, environmental cues, and chronic underfunding of public schools, it’s up to us to help patch the pipeline. I believe one way to assist in their fight is to share how social justice and technology can be a career. That they can make change beyond simply doing the good work of capturing racial violence against Black and brown bodies with their phones or sending it out via their personal or organizational social media accounts.

Like Mary McLeod Bethune it is our duty to create new learning environments that will teach Black students about the emerging disciplines of public interest technology, which requires that students have an understanding of tech policy such as Net Neutrality and not just technical skills such as coding to advocate for people who look like them. We can design learning environments that will teach Black students how to fight against the prison industrial complex as both on-the-ground as activists and as tech social entrepreneurs like the founders of National Bail Out Collective, who organize online to pay bail bonds and other court fees for arrested Black mothers.

In dreaming widely, we -- and especially those who are already in academia -- can build a curriculum that teaches Black students how to deconstruct algorithms like the co-founder of Data 4 Black Lives, and the founder of the Algorithmic Justice League , and how to use machine learning and artificial intelligence to support global sustainability initiatives with the co-founder of Black in AI. We can and are creating college courses that teach them how to fight lead poisoning in water by using coding and crowdfunding to pay people’s unjust water bills as demonstrated in the work of the Human Utility Project. We can develop new social work schools that will teach about the terms civictech and govtech, and how governments -- both locally and nationally -- are using technology to better deliver safety net and health services to constituents. We can develop national partnerships with the Net-gain Partnership, Code for America, FUSE Corps, Tech Congress, and Civic Hacker to showcase for students what new careers are emerging in this new space of technology, social justice, and government.

You, as my reader, are in a position to help all of this become a reality. It’s hard work, but it’s the kind of work that will change the world for all students, regardless of race, sex, age, disability, or sexual orientation. You, as a PIT educator, have the power to walk in Mary McLeod Bethune’s footsteps, changing old ideas and practices and fulfilling the powerful potential of youth.

Fallon Wilson is the newly named Vice President of Policy at the Multicultural Media and Telecom Internet Council (MMTC). She is also the co-founder of the #BlackTechFutures Research Institute. #BlackTechFutures Research Institute builds a national network of city-based researchers and Black tech ecosystem builders conducting research and developing policy on sustainable local Black tech ecosystems. Dr. Wilson has a B.A. from Spelman College and M.A./Ph.D from the University of Chicago. As a public interest technologist, she discusses race, gender, #blackchurch futures, and civic tech issues. She is on twitter @SistahWilson

A longer version of this piece will appear in the February issue of The Commons. You can subscribe to that newsletter here.

This excerpt was created for PIT-UN's newsletter, PIT-UNiverse. Subscribe here.