Join Mundy and contemporary technologists to consider the hidden lives of these heroic Americans and what their stories tell us about women in computer science today.

This event will be livestreamed on this page. Follow the conversation online with #CodeGirls and @FutureTenseNow. 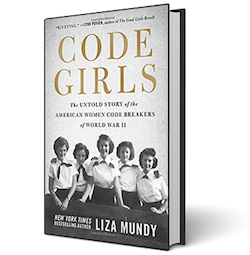 Copies of Liza Mundy’s Code Girls: The Untold Story of the American Women Code Breakers of World War II will be available for purchase by credit card or check.