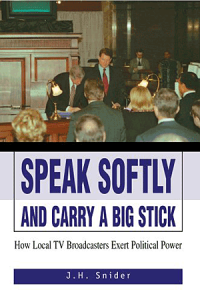 "Broadcasters have always been coddled by politicians, and Speak Softly explains how and why. J.H. Snider tells the story with the rigor of a scholar, the doggedness of an investigative reporter and the zeal of a reformer."-Paul Taylor, Executive Vice President, Pew Research Center

"J.H. Snider offers an extremely comprehensive and well-documented look 'behind the curtain' at how the National Association of Broadcasters drives its national legislative agenda. This is must reading for not only political scientists but for all who are interested in media policy and how it gets made in Washington."-Chellie Pingree, President and CEO, Common Cause

"This astute book is a first-rate work of original scholarship. It also provides an unsettling description of broadcasters' policy influence. When their own interests are involved, broadcasters cannot be trusted to act in the way they demand of all others in society. Readers will no doubt question whether J.H. Snider's recommended solution is a practical one. But no reader will question his call for new measures." -Thomas E. Patterson, Bradlee Professor of Government and the Press, Harvard University

"Having played a role in the mad-cap drama of telecommunications legislation Snider documents, I can tell you he has captured the essence of the machinations, strange bedfellows, and almost single-minded, righteous self-interest that drives the telecommunications debate. Like it or not, this is how the power game is really played." -Stephen R. Effros, Former President (1976-1999), Cable Telecommunications Association

"Speak Softly documents the broadcast industry's striking influence on public policy, including the landmark Telecommunications Act of 1996. As Congress gears up to re-write the Act, J.H. Snider's analysis is particularly timely." -Kevin Werbach, Professor, The Wharton School, University of Pennsylvania