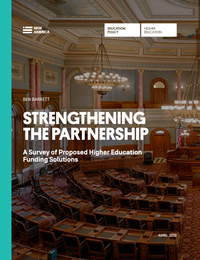 States have continued to cut funding for higher education while tuition has more than doubled in 25 years. The average student loan debt for college graduates reached an all-time high of $28,590 in 2014.

This report is a follow-up to the February release of our paper, “Starting from Scratch: A New Federal and State Partnership in Higher Education.” In our paper we proposed a plan that would operate as a sliding scale in which families with the lowest-income generate the greatest funding. States would be required to match 25 percent of the federal contribution and institutions must enroll at least 25 percent of their student population from a low-income background in order to be eligible for funding. Starting from Scratch draws on the important groundwork laid by proposals reviewed in this paper.

Barrett provides summaries of each plan and evaluates how each addresses several important issues including:

“This paper not only provides a look back at the plans that proceed our own, it also provides a roadmap for future conversations about how to rebalance the amount states, the federal government and families contribute towards the cost of higher education,” said Barrett.

Barrett found that despite disparities in design, all the plans, including our own, converge around the common idea that states must be reinstituted as a primary partner in financing higher education.