COVID or Not, U.S. News Refuses to Budge on Using Average SAT Scores in Rankings 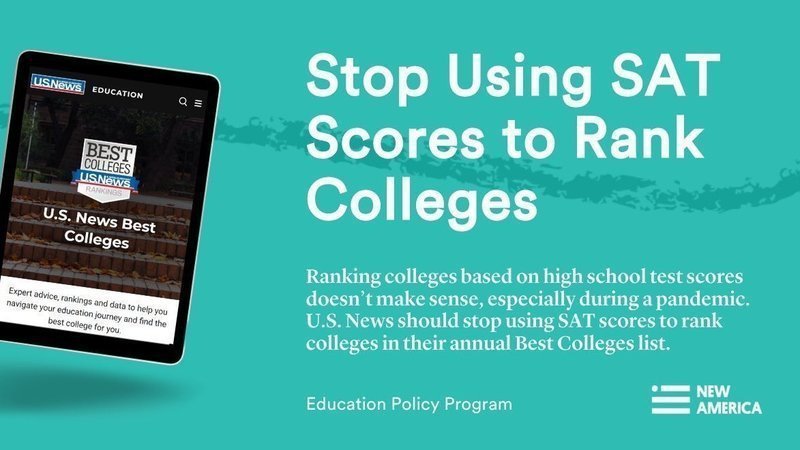 New America's Education Policy Program has posted a petition on the website change.org calling on U.S. News & World Report to stop using average standardized test scores to rank colleges. If you agree with our stance, which we and a dozen other higher education organizations and experts stated in an open letter to the publication in July, click here.

Stop the presses. The latest U.S. News & World Report college rankings are out, and we are shocked, shocked to see that the publication is continuing to use SAT and ACT scores to rank colleges in their Best Colleges list.

While the news is not surprising, and in fact predictable, it is shocking nonetheless. Using the average standardized test scores of a colleges’ incoming students to judge the institutions’ quality has never made any sense as the colleges had nothing to do with scores on tests taken in high school. And it is even more preposterous at a time when millions of students were unable to sit for the SAT and ACT exams due to the pandemic.

Because of the incredible amounts of disruption COVID caused, nearly three-quarters of four-year colleges, according to National Center for Fair and Open Testing (FairTest), have made it either optional for applicants to submit a standardized test score or are not considering test scores at all when making their admissions decisions. Last year, only about two out of every five students who used the Common Application to apply for college for this fall submitted test scores. It is likely that many of those students were among the wealthiest, whose families could afford to travel far and wide to find open testing sites.

Recognizing reality, the Fiske Guide to Colleges announced in March that it would not include average SAT or ACT scores in its annual evaluations of colleges since the scores weren’t reliable with so few students submitting them. “We take pride in our reputation as a trusted source of reliable admissions information,” Edward B. Fiske, the Guide’s editor, told Inside Higher Ed. “Rather than publish inaccurate and misleading data, we have decided to omit any reporting of score ranges for the foreseeable future. To do otherwise would be a disservice to our readers.”

But true to form, the U.S. News editors in charge of the rankings, who are infamous for their obstinacy, refused to budge.

In July, New America’s Education Policy Program published an open letter calling on the editors of U.S. News to stop using standardized test scores to rank colleges. A dozen high-profile higher education organizations and individuals signed on to the letter including the National Association of College Admission Counseling (NACAC), which represents around 25,000 college counseling and admission professionals. We have also posted a petition on the website change.org to bring more attention to the issue.

Defenders of the rankings say we are making a mountain out of a mole hill. They note that standardized test scores represent a small share of a college’s overall ranking. Currently, admitted students’ SAT and ACT score is worth 5 percent of the student selectivity category, which is worth 7 percent of the total rankings. This percentage for test scores has been in decline over time. In the 2018 edition test scores were rated at 8.125 percent, and in the 2019 edition at 7.75 percent.

But simply looking at how much the scores count in the rankings undervalues the importance that U.S. News assigns to them. Just consider how the publication punishes colleges that go test optional or test blind by assigning them arbitrarily low standardized test scores.

In this year’s rankings, U.S. News deducted 15 percent off the average scores at test-optional colleges if fewer than half of their incoming students submitted scores. That’s a bit more lenient than past years, when the threshold was less than three quarters of the entering class. “The change was made to reflect the growth of test-optional policies through the 2019 calendar year and the fact that the coronavirus impacted the fall 2020 admission process at many schools,” the methodology states.

But the editors of the rankings didn’t show any mercy to the colleges that went test blind, or ignored standardized tests altogether when admitting students. For the second year in a row, U.S. News punished these schools by assigning them “a rankings value equal to the lowest test score in their rankings.” A total of 84 colleges are now test blind.

While the penalty is slightly less harsh for test optional schools this year, it is simply outrageous that U.S. News assigned arbitrarily low average scores to schools that didn’t require students to submit test scores. These schools tried to do right by the vast majority of high school students weren’t able to take the tests as a result of COVID. And it is the height of absurdity that the publication makes up out of whole cloth test scores for colleges that don’t take test scores into account at all.

In effect, U.S. News appears to be trying to use its outsized influence over colleges to discourage them from reducing their reliance on standardized test scores, even though doing so would likely make these schools more socioeconomically and racially diverse. It’s just another way that the publication rewards exclusivity. The U.S. News rankings push colleges and universities to remain bastions of privilege, rather than opening their doors wider to low-income and students of color.

To be clear, we don't particularly care how the methodology affects an individual college's ranking. The key thing for us is how the rankings affect college behavior. Some colleges appear to be making their decision about whether or not to remain test optional or test blind based on how U.S. News treats these schools in the rankings. The fact that U.S. News, a private commercial entity, has that much influence over colleges is incredibly disturbing. It's almost as if U.S. News and the College Board are working hand in hand to preserve the status quo. Why else continue to use test score data to penalize colleges that are trying to help their students?