Rethinking Safety, Security, and the Role of Police in Our Schools 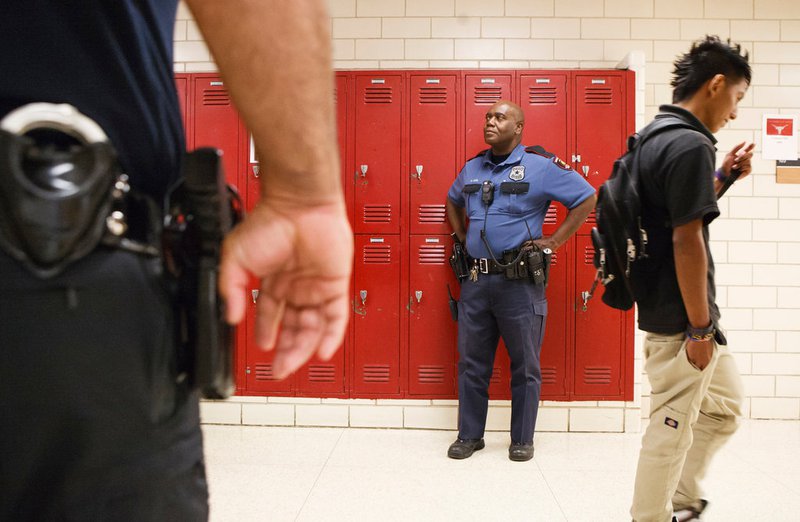 The news and footage of George Floyd’s murder over the summer sparked outrage, international protests, gestures of solidarity, and a wave of police reforms that lasted well into the fall. While cases of police violence against citizens sometimes draw national attention, that attention is often short-lived, resulting in few substantive policy changes or cultural shifts. In response to Floyd’s death, however, a number of school districts distanced themselves from local police departments. Advocates have worked to remove police officers from school buildings for decades, but six months into the worst pandemic in modern history, the public reaction to Floyd’s death catalyzed change almost immediately.

Police officers in schools are not a new phenomenon. The first SRO to be hired full-time by a school district was in Flint, MI in the 1950s. According to the Police Foundation, while the original intent of the SRO program was for police officers to serve as trainers and mentors to students and teach them about public safety, it has since shifted toward crime prevention and discipline enforcement. School-based law enforcement did not become widespread members of school communities until the 1990s, largely in response to the uptick in school violence and shootings. As the actual role of police in schools has shifted, government agency programs like the Office of Community Oriented Policing (COPS) at the Department of Justice have emerged, national organizations like the National Association for School Resource Officers have become much more active, and more recently, the Trump administration developed a federal clearinghouse for school safety resources. Under the Obama administration, the US Department of Education attempted to refocus school policing on positive school climate and ensure best practices by working jointly with the Justice Department and the White House.

According to National Center on Education Statistics (NCES) data, in the 2017-18 school year, approximately 34 percent of elementary schools, 65 percent of middle schools, and 70 percent of high schools had a sworn law enforcement officer or school resource officer (SRO) on campus. Despite how common it is to see close relationships between schools and police departments, the data regarding the effectiveness of police in schools is unclear. There are conflicting opinions on whether the presence of school-based law enforcement makes students, teachers, and parents feel safer.

Evidence suggests that presence of school-based law enforcement results in disproportionate arrests of students of color. A 2017 study found that for every SRO hired, there were 2.5 more in-school arrests of students ages seven to 14 annually. According to the federal Civil Rights Data Collection (CRDC), in the 2015-2016 school year, Black students accounted for 15 percent of the student population, but 31 percent of law enforcement referrals or school-based arrests. A more recent study found that SROs viewed their jobs and threats differently based on the racial makeup of their district. SROs in majority white districts perceived threats to be outside of the school building, but those policing majority Black and Latinx communities found the students themselves to be the threats. Another study based on New York City schools found that the influx of officers in schools between 2004 and 2012 was associated with lower academic test scores for Black boys ages 11 to 15 and an increase in absences by an average of 1.5 days per year.

The importance of committed and caring adults in schools cannot be overstated, but that role should not fall to school-based law enforcement. Even prior to COVID-19 pandemic, states and districts have been facing massive teacher shortages and major funding inequities. According to The Education Trust, the average ratio of school counselors to students is 464 to one. Approximately eight million children (one in five) do not have access to a school counselor of any sort, and three million of those children have no access to any other school supports like school psychologists or social workers. As a result, adults in school buildings, including school-based law enforcement officers, are often asked to take on responsibilities outside of their official roles.

The importance of committed and caring adults in schools cannot be overstated, but that role should not fall to school-based law enforcement.

School-based law enforcement officers rarely receive the specific child development, social emotional, and mental health training necessary to handle school discipline issues in a developmentally appropriate way. Only 28 states and DC require training for SROs, and only 15 states and DC require statewide certification. Maryland and Utah are the only states that require training on “implicit bias and disability awareness with specific attention to racial and ethnic disparities,” and “cultural awareness,” respectively. Lack of appropriate training means officers respond to students based on the training they do have, which often results in the criminalization of typical and minor student behaviors. High profile incidents have been recorded of SROs and other school-based law enforcement using excessive force with students like 6-year-old Kaia Rolle, and 11-year-old Jarome Laison.

Decisions about the relationship between districts and police departments will remain local, but there is a role for the federal government. Under the Every Student Succeeds Act (ESSA), states were required to select a measure of School Quality and Student Success (SQSS) for their accountability system. As of 2019, 16 states have elected to use annual school climate surveys of students, parents, and teachers to better understand the culture within a school building. States and districts using school climate surveys can ensure that data is being gathered on how students, parents, and teachers are experiencing school based law enforcement, and the culture that their presence creates. In addition, the 2014 School Discipline Guidance, jointly issued by the Obama Education and Justice Departments, offered a number of safe and appropriate best practices that centered on combating the disparate impact that race has on discipline. Under Secretary DeVos, that guidance was rescinded in 2018. The guidance was an important step in protecting students of color because it acknowledged the harm done and offered actionable steps to improve the way students of color experience discipline in schools. However, the growing evidence around the realities of school based policing means that the Dear Colleague letter must be updated to reflect this understanding that the implementation of school based law enforcement continues to be a threat to students of color.

The protests in response to George Floyd’s murder created a sense of urgency that presents society at large, and schools in particular, the opportunity to actively redefine what safety and security means outside of law enforcement. By moving from a culture of control to a culture of care, schools can refocus on providing mental and emotional supports, and ultimately change how students experience school discipline.