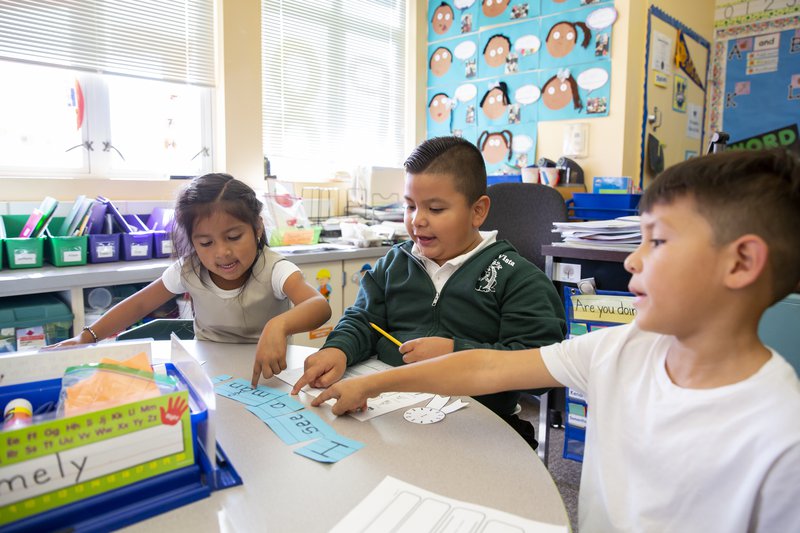 As the number of linguistically diverse children nationwide continues to rise, it is no surprise that education leaders are interested in investigating instructional models that can be replicated to better serve this population. In California, nearly 60 percent of children zero to five live in a home where a language other than English is spoken. Yet the same programs and policies that were intended to support these students often end up holding back and stifling their potential. Since 2008 the Sobrato Early Academic Language (SEAL) model, which started out in three elementary schools and feeder schools and now reaches 50,000 students in over a hundred preschool and elementary classrooms, has been working to address these gaps by providing a research-based approach to meeting English learners’(ELs) linguistic and academic needs by capitalizing on their assets. The model is grounded in four pillars that prioritize weaving both expressive and academic language into curricula, creating an affirming and enriching environment, aligning early education and elementary school systems, and building strong partnerships between families and schools. SEAL also focuses on professional development, curriculum support, and technical assistance to improve school systems.

Although early piloting showed promising results, education leaders were interested in investigating not only the feasibility of replicating this model, but also the model’s impact on student outcomes. Over the span of four years between 2015–2019, Loyola Marymount’s Center for Equity for English Learners and the Wexford Institute sought to answer those questions by studying the implementation of the SEAL model in 67 schools across 12 LEAs. The long-awaited report, as summarized by a set of briefs released this October, encapsulates much of SEAL’s effectiveness and promise.

First, researchers found that SEAL improved teaching practice by increasing the use of research-based practices for ELs as well as teachers’ perceived knowledge and understanding of ELs’ needs and assets. Teachers utilizing the model were more collaborative with each other and were more effective at engaging families in their children’s education. Second, student outcomes for ELs enrolled in schools using SEAL were more positive in both English language development and academic content areas. Specifically, the report found that by fourth grade, most ELs had significantly progressed or had been reclassified at higher rates than their statewide peers. In addition, former ELs performed as well as or better than both their English-only peers also enrolled in SEAL schools and former ELs statewide in English language arts and math. Considering that SEAL schools have higher poverty rates than California overall and have high concentrations of ELs, these findings counter the myth that students in these circumstances are bound to underperform.

Additionally, Spanish-speaking ELs in bilingual classrooms in grades 2–4 either maintained or progressed in their home language while SEAL English learners enrolled in English-dominant programs experienced a regression in their Spanish development. And from a social-emotional perspective, findings show that teachers felt their students were more joyful, confident, and engaged after they went through SEAL training.

Despite finding variability in how the model is implemented, the report concludes that SEAL can be replicated to deliver positive results. In a related webinar with LEA leaders who participate in SEAL, the resounding observation was that prior to the model being implemented, English language development was disjointed and disconnected from content.

Leaders from Mountain View School District, Superintendent Lillian Maldonado French and Assistant Superintendent Raymond Andry, shared that previous approaches were not engaging or high-level enough, and for them SEAL is part of a prevention strategy to address persistent issues with ELs in California such as recently reclassified ELs who are not maintaining academic achievement, and long-term English learners (LTELs)—ELs who have not been reclassified after six years.

When asked about how SEAL transferred into the virtual setting during the pandemic, leaders shared that since teachers had already been training in and bought into the principles that underpin the model, they were eager to see that through in the remote context. The transition was not seamless, but it was made possible by SEAL coaches who quickly developed units for the digital platform, offering educators 45 minute professional development sessions everyday. Teachers also helped train families on how to use the new technological infrastructure. And even now as students have gone back to in-person instruction, videos created during the pandemic are still being used by families.

SEAL executive director Anya Hurwitz shared during the webinar that SEAL takes the question of whether a student got the ‘good teacher’ off the table using an asset-based approach to both teachers and students, but it doesn’t come without challenges. LEA representatives shared that while finances and a lack of systemic commitment may pose barriers to successful SEAL implementation, SEAL’s ability to create alignment and coherence for English learners across and within grade levels is ultimately worth the investment. And as Superintendent Maldonado French stated, SEAL “creates a sense of equity and democratization so there is no such thing as ‘lucky students’, every student should be a lucky student.”