Principals Go Back to Kindergarten 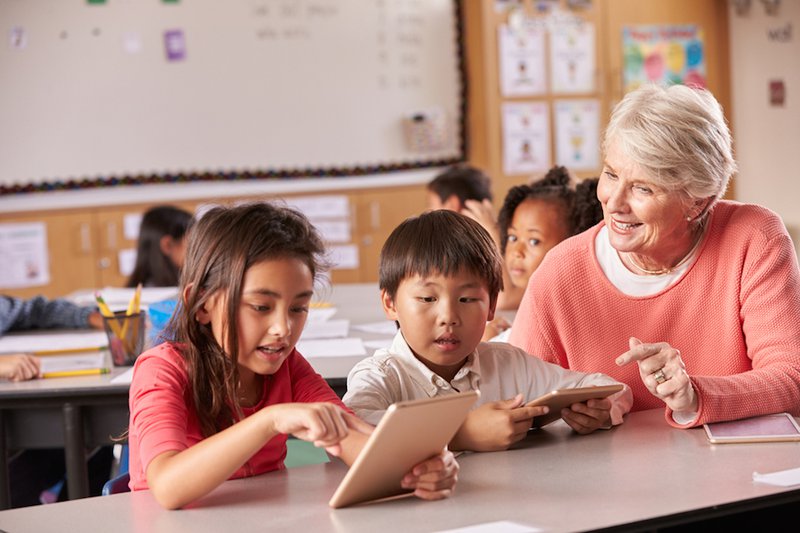 To the untrained eye, the students in a kindergarten classroom in Fresno, Calif., were playing with blocks. But the elementary school principal circulating the room saw something different. The students were building their own White Houses, having just finished reading The House that George Built, a book about George Washington and construction of the president’s house. The students  were chattering with their classmates about “blueprints” and “models.” Later, in this same classroom, students would write about the buildings they’ve designed and imagine what they would like to have in the White House if they become president.

What the principal noticed was how much more learning can take place in an early childhood classroom when students are engaged in play instead of a teacher-directed lesson.

The moment was an important one for this principal, who was taking part in the Early Learning Principal’s Academy, a unique training program in Fresno Unified.

The principal would later tell Julie Montali, an early learning program manager who helps run the training program for the district, that she realized they’d “gotten lost” on the best way to teach young children by too often being “teacher-directed.”

The Principal’s Academy reflects the district’s efforts to shift resources to better support early learning. This urban district of 73,000 students in California’s Central Valley has been investing $7.4 million annually in early learning since 2011 as a strategy to improve outcomes for the 84 percent of the district’s children who live in poverty. [For more on Fresno’s efforts to reform their early childhood programs, read our community profile.]

The initial focus of the district’s work was on expanding programs for 3- and 4-year olds.  But as district leaders began to expand their reforms into kindergarten and first grade, things got more complicated.

“We had done all this work in pre-K and TK [transitional kindergarten],” said Fresno’s director of early learning, Deanna Mathies, “and then our kids were going into what are some pretty bleak situations in kindergarten.”

As New America’s analysts argue, high-quality early education can be effective in starting to close achievement gaps, but weak elementary school instruction can undo that work.

The district’s kindergarten and early elementary grade classrooms, Mathies said, were too often using instructional models not appropriate for young children—classrooms with desks in rows, for example, and too much whole-group instruction that expected children to sit still and listen for long periods of time.

One thing they knew: “In order to really get to quality and to create a continuum of learning for young children, we had to get to the site leaders,” Mathies said.

Principals have a big impact on what happens in classrooms. But for principals to serve as effective early education leaders, New America’s Aaron Loewenberg writes in “Why Principals Matter,” they need a deep understanding of early learning and childhood development. Yet few have it. Research shows early childhood education is not part of most prospective principals’ preparation programs, and many principals in New America’s focus groups said they felt they lacked the knowledge and skills necessary to provide valuable instructional feedback to teachers in the early grades.

Enter the Fresno Unified Early Learning Principal's Academy. The academy brings together principals in informal, collegial settings, with coaching and practicums to help them support their teachers in early grades and capitalize on the early learning programs that are setting kids up to succeed in school.

Since the first cohort of 15 principals in 2014, 41 out of the district’s 66 elementary school principals have taken part.

“The collegial kind of atmosphere has allowed people to be really honest,” Montali said. “By and large, we don’t have principals who really have been trained in this world. And a lot of things have changed.”

In addition to the dinner sessions, the academy’s practicum requires principals to teach lessons in an early childhood classroom and then reflect on the experience.

Mathies and Montali also conduct group walkthroughs so principals can learn from one another’s schools. They meet with principals in follow-up sessions to help them talk through what they saw and plan for how to implement desired changes.

The work has not been easy.

“It can be a bit of a battle,” Montali said, “because you are getting people to think in a different way.” Organizers are now exploring how to include district-level administrators and managers in the training program.

The goal, organizers say, is not just relaying content but building a relationship between individual leaders and the district’s early learning staff in a way that can be a conduit for change.

“It’s really transforming schools that were very siloed in their practice,” Montali said.

For example, Lisa Shipman, a principal who oversees nearly 900 children at Ewing Elementary in Fresno, said the academy has helped change the culture in her school to more highly value early learning and, importantly, to build a system of well coordinated teaching and learning instruction from preK to third grade.

“It really resulted in more vertical articulation,” Shipman said. She described how teachers work together grade by grade. For example, Shipman said staff members have been working to improve writing instruction across grade levels, something which may have happened only in grade level teams in past years. At a recent faculty meeting, teachers examined writing samples and discussed how instruction in each grade level is meeting standards and building on work that has come before.

“It was very eye opening for upper grade teachers to actually look at the rubrics and see what instruction looks like in each grade,” she said.

“They are seeing now how everything is on a continuum.”

The program’s emphasis on principals working alongside teachers to make concrete improvements in their instructional practice has been very powerful, she added.

“We are learning together, side by side.”"