The Early Grades are Different: A Look at Student Surveys

This is part four of a four-part blog series on teacher evaluation in the early grades. 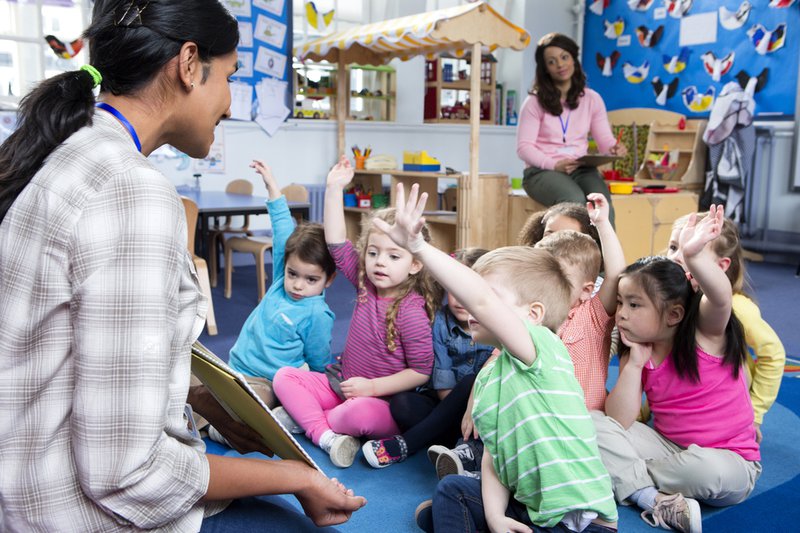 Peer into a college classroom near the end of a semester and you may encounter a perplexing sight: students hunched over answer sheets, bubbling in answers and scribbling notes, seemingly unsupervised and undirected. But these students aren’t taking a test. They are completing student surveys, a tool used by colleges and universities to evaluate professors. Now this practice, long a part of higher education, is being tried in K–12 classrooms as part of efforts to reform the way teachers are evaluated.

The reasoning is intuitive. Throughout the year, students spend countless hours with their teachers, while principals, who have long been the primary evaluators of classroom teaching quality, may visit a classroom a few times a year. Students know whether their teacher is able to manage the classroom and whether they feel supported as learners. It shouldn’t come as a surprise, then, that research shows that student perceptions of teacher quality may actually be more accurate than those of a principal.

In the changing teacher evaluation landscape, student surveys have surfaced as a way to collect feedback from those who know teachers best.

Using student surveys to effectively evaluate teachers doesn’t come without its fair share of challenges, however. Surveys rely on students being able to understand and answer questions about their teachers. Older students seem to have no problem doing this. The Bill & Melinda Gates Foundation’s Measures of Effective Teaching (MET) project found that survey results from students in grades four through eight can predict student achievement gains, are more consistent than results from classroom observations, and provide teachers specific feedback to improve their practices.

But what about using student surveys for children in pre-K through second grade? Asking young children to evaluate their teachers can prove more challenging for a host of reasons. There are concerns about their ability to understand questions or give unbiased feedback. Current research on the consistency and accuracy of student survey results is far from robust, but a few studies have found that pre-kindergarteners and kindergarteners can reliably rate their teachers. Still, many state and local policymakers are still deciding whether surveys in the youngest grades make sense.

Whether surveys are appropriate at any age depends largely on how they are designed and implemented. An effective survey must ask questions in a way that yields meaningful results. For instance, rather than asking students to respond to the statement, “My teacher is clear,” a high-quality survey might ask students to respond to, “My teacher has several good ways to explain each topic that we cover in this class.” Surveys should look different in pre-K through second grade than they do later on because of literacy challenges and developmental differences. A six-year-old probably wouldn’t be able to read the sentence above and might not even comprehend it correctly if read aloud. And, if administered aloud, would a child feel comfortable providing negative feedback? If administered in a small group, would children feel pressured to agree with their peers?

Although most states do not use surveys in the early grades to inform teacher evaluation, a handful of states and districts have either experimented with or implemented K–2 student surveys. Their experiences offer a glimpse into what this evaluation tool could look like for others. Some of these states and districts have undertaken the design process on their own, but many others use companies, like Tripod or Panorama Education, which have expertise in student survey design. Most of the leading companies designing student surveys, however, do not offer them for students in kindergarten through second grade.

Tripod is one of the few that does. Tripod’s surveys, which span from kindergarten through grade 12, were first developed in 2001 as a partnership between Harvard University Professor Ronald F. Ferguson and Ohio educators. These surveys, now used in nearly 30,000 classrooms in 24 states, have been updated in response to feedback from research, field experience, and input from key stakeholders to ensure that “survey items at the Early Elementary level are specifically geared for students at this [developmental] level.” Tripod says its K–2 surveys are “read aloud to students, in small groups, by someone other than the classroom teacher,” and students “only need to be able to recognize the words ‘No,’ ‘Maybe,’ and ‘Yes’” to respond. Tripod’s analysis from “thousands of classrooms,” claims that kindergarten students are able to distinguish between these words. It’s unclear whether this analysis found whether students can fully comprehend the questions asked. However, Tripod says that its surveys “have generated results that meet rigorous tests of reliability,” and that early elementary surveys “have been shown to predict achievement gains as well as other outcomes such as classroom level behavioral engagement, emotional engagement, and motivational mindsets.”

Panorama Education also offers surveys in the early grades. A representative from Panorama says the surveys the company has designed for students in grades 3–12 have been validated, but “there is some research that K–2 students may have a difficult time conceptualizing and comprehending some items around climate, valuing of school, classroom engagement—making them less reliable measures.” It still offers early elementary surveys when requested, though. On Panorama’s survey, students choose between a smiling face, neutral face, and frowning face, rather than “yes,” “maybe,” and “no” due to the varied and often limited reading abilities of young children. When we asked Tripod if it considered giving students the option of pictorial responses, such as a smile for “yes” and a frown for “no” the company responded: “pictorial responses can be more open to interpretation and do not always align to the thoughts and feelings we are trying to capture through the survey items.” Whether pictorial or word-based responses best capture students’ views remains to be proven.

Tulsa Public Schools is one district that recently started using Tripod surveys in K–2, but there has been backlash from dozens of early grade teachers who expressed concerns about the appropriateness of the surveys for the age group and their potential impact on the student-teacher relationship. In response, the superintendent of Tulsa Public Schools created a task force to study the use of the surveys, in the early grades. Tripod has been working with the task force to answer questions about the surveys, create resources to support survey administration, and even offered suggestions for reformatting the surveys to address teacher concerns.

The state of Hawaii implemented Tripod surveys in the early grades statewide but ultimately decided against using them. Hawaii started using the Tripod student survey in the 2012–13 school year to constitute 10 percent of a teacher’s overall evaluation score for all grade levels. Teachers and teacher unions lobbied to remove surveys from early grades, and as of the 2014–15 school year, kindergarten through second grade teachers did not use surveys at all. Despite the data provided by Tripod, educators felt that students at this age did not have the capacity to comprehend the purpose of the survey. They also raised concerns over the amount of time and resources it took to implement the surveys, as they had to be read aloud in as many as 14 different languages to accommodate the state’s diverse student population.

Georgia had a related experience. The state experimented with using student surveys to inform teacher evaluation in 2012. According to Cindy Saxon, Associate Superintendent of Teacher and Leader Effectiveness for the Georgia Department of Education, there was feedback from teachers and parents after the pilot that led to the discontinuation of the survey in K–2. Georgia experienced particular difficulties in the early grades, where young students struggled to log into and navigate a complex online survey platform. Saxon said that “what should have taken ten to fifteen minutes might have taken an hour and a half” in younger grades. These logistical barriers, and teachers’ perception that “students couldn’t give an accurate view of their classroom” were enormous obstacles to survey use.

Additionally, the state evaluated the pilot survey’s results and found that K–2 students tended to rate their teachers significantly higher across the domains, and K–2 results were the least consistent with other evaluation measures. In the most recent legislative session, lawmakers removed surveys from Georgia’s evaluation system for all grade levels. Saxon felt that, unfortunately, the surveys were often perceived as another assessment to be used punitively against teachers, and there was concern about the time and resources they took to administer.

Massachusetts is another state working to determine how best to incorporate student feedback into teacher evaluations at all grade levels. Massachusetts’ overall evaluation system provides significant flexibility to districts; the state doesn’t assign specific weights or point values to different components of the evaluation. Rather, it describes three broad categories of evaluation and recommends pieces of evidence to collect in each one. One of these categories requires evidence of “student and staff feedback.”

The state has also decided that surveys for early grade students are not the answer. In 2013, Massachusetts officials began collaborating with districts to develop and pilot standardized student surveys in all grades. But according to Matthew Holloway, an Educator Effectiveness Specialist at the Massachusetts Department of Elementary and Secondary Education, teachers in the early grades gave feedback after the initial pilot that “some of the barriers around literacy, reading, and writing, and more general barriers” made a more traditional survey “an ineffective way to get feedback.” With this in mind, the state worked with educators to create a set of "Discussion Prompts" that capture “a broad range of educator effectiveness standards” in what it feels is a more developmentally-appropriate manner. The state recommends that teachers or a third party use the discussion prompts with small groups of students to solicit feedback. For example, the teacher might try to gauge whether the following statement related to informal assessments is true for students: “When I am stuck, my teacher wants me to try again before she or he helps me.”

Using the state-developed discussion prompts is not mandatory; districts and school districts can choose their own form of surveys or alternative evidence. Holloway stressed that giving districts flexibility in how they collect student feedback “allows them to emphasize their priorities.” He noted that he has seen the most success with student feedback in districts that promote the process as a way for teachers to “align student feedback to their own self-assessment and goal setting processes,” where teachers work to improve their practice in a way that is informed by students. Massachusetts is still in the early stages of implementing student feedback as part of teacher evaluations and is examining what is most beneficial to districts, teachers, and students.

It is possible that student survey responses can shed light on teacher performance and encourage teachers to tailor their instruction to better serve their students, but there are real concerns states and districts have about their usefulness in the early grades. States that have attempted to incorporate surveys in the early grades have found them to be very time- and resource-intensive to implement. Further, early grade teachers have expressed concerns over their students’ ability to understand the purpose of the task.

Some states do appear to be eager to find ways to integrate student feedback into the evaluation system. As one state official put it, “kids deserve the opportunity to [take student surveys]… and our kids can be empowered if they think they have a voice.” While the research on whether young children can effectively evaluate teachers appears inconclusive, there is little doubt that teachers can benefit from knowing what their students think about their classroom experience. But using surveys to inform evaluation is still new and inconsistent. If used solely to inform teacher practice and professional development, reluctance on the side of the teacher may be reduced. More research, however, is needed to determine if surveys should be incorporated into high stakes decisions for teachers of young children.