The Time for Paid Leave is Now

Dispatches from the Paid Leave for All Bus Tour: Denver, Colorado 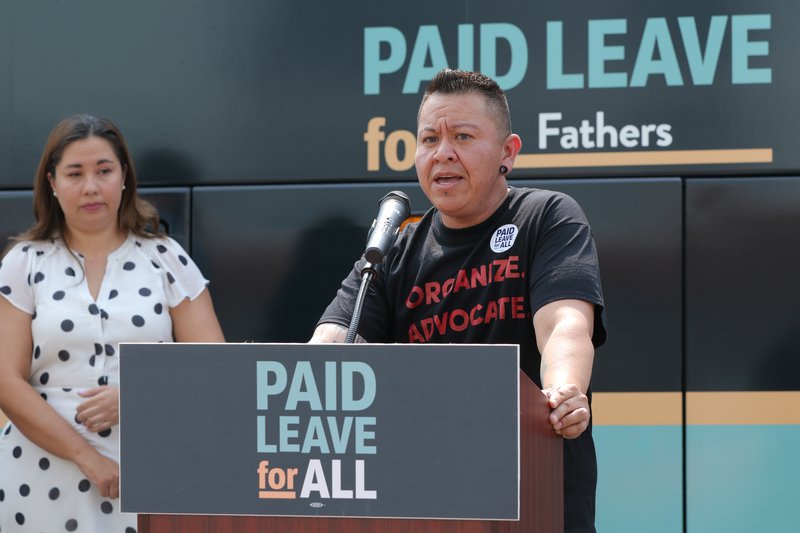 From August 2-13, 2021, Paid Leave for All will be rolling through 14 stops in 10 states to share and hear stories from workers and businesses, to celebrate state successes, and to amplify the need for paid family and medical leave for all working people and families in the United States. Read more about the 2021 Paid Leave For All Bus Tour here.

Denver, CO, Aug. 9 — Today I had the honor of representing the Voices of Workers group of Paid Leave for All as the campaign’s bus tour stopped in Denver. Speakers came together to celebrate the amazing progress we’ve made and send a clear message: The time for paid leave is NOW. We’re working hard to ensure passage of inclusive, effective paid family and medical leave at the national level so it doesn’t matter where you live, what kind of job you have, what kind of care you need — everybody would have access to affordable time to care.

I became involved in this fight in 2009 when I had to take my dad off life support and couldn’t be with him when he took his final breath. It took almost eight years to get over the guilt of having to make that decision while I was at work so far away and not at his side. It led me to be part of the fight for paid leave in our state and also at the national level. This is a journey I’m proud to be in alongside so many other people.

The Voices of Workers is a group of worker leaders from all around the country. We have different backgrounds and jobs and need for care, but we’re joined by having the same determination to win paid leave for all. As different as we are, we’re very close — for me, it’s like another family. We follow each other on social media, follow each other’s struggles, cheer each other on. Our voices are helping ensure that the legislation we win includes those who need it the most.

Joining me at the bus stop today were a number of other speakers. Colorado State Sen. Faith Winters talked about how the fight here was a long one. When we couldn’t get our bill passed in the legislature, we took it to constituents who gave it a big yes. Now we have a once in a generation opportunity to pass this at the federal level.

We also heard from Rep. Yardira Caraveo, a pediatrician who talked about the devastating conversations she has with parents whose child has just been diagnosed with cancer. Often the first question they ask is not about the prognosis or side effects of treatment. They want to know how much time they are going to have to take off work, because they don’t have the time or financial capability they need.

Today the Senate released what will be in the budget reconciliation bill. The fact that paid leave is at the top of the list is the result of our voices speaking up loud enough that our elected officials are listening. As we saw in Colorado and across the country, this issue is important among Democrats and Republicans, independents, people in small rural areas as well as urban. It touches everybody. And it’s finally gotten the attention of people in Washington, D C.

We need to make sure everyone can give and receive care. That means we have to stick to our values and have a program that includes us all.

We want to recognize all families. Whether multi-generational, LGBTQ, related by blood or affinity, everyone should be able to care for loved ones.

We need a minimum of 12 weeks, giving enough time for parent and child to bond, for people to heal.

We want to make sure people can afford to take the time off, with graduated wage replacement so those who earn the least get the highest percentage of their wage while on leave. No matter where you work, whether you’re the CEO or mail clerk, you should be able to take the time you need.

Colorado passed one of the best paid family leave packages around the country. We were the first ones to pass it by ballot versus legislation. We listened to the people of the state and came up with something that would make a difference.

Now I look forward to passing something at the national level that we’re going to be proud of, something that is good for growth, for families, for our infrastructure.

The time for paid leave for all is now.

Visit PaidLeaveforAll.org and follow Paid Leave for All on Instagram and Twitter for more information on the bus tour and on ways to get involved in winning paid family and medical leave for all.

The views and opinions expressed by the authors of this series are their own and do not necessarily reflect the official policy or position of New America.

Kris Garcia is a board member of 9to5 Colorado and a member of the Voices of Workers group of the Paid Leave for All campaign.