How The Stress Black Workers Face at Work Threatens Their Health, and Their Futures 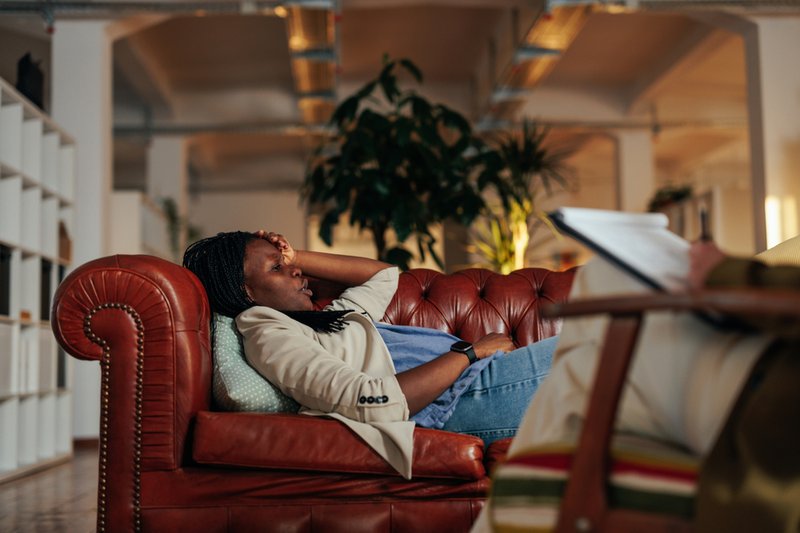 A few years ago, when I was a reporter at The Washington Post, and one of the few in the U.S. regularly reporting and writing about work-family conflict, race, class and gender equity, I came across a National Science Foundation study on why there are so few women, and women of color in particular, in engineering. The bottom line: an unwelcoming or even hostile work environment.

I wrote about the “uncivil environment” where women engineers reported having to repeatedly show their badges, as if to convince people they really did belong. Or, even more insidiously, for women engineers of color, being mistaken for the cleaning staff. In a survey of more than 5,000 women who had graduated from top universities with engineering degrees in six decades, 40 percent had either quit the field or never entered the profession.

That chilly and unwelcoming workplace culture is something that Black workers like LeRon Barton know all too well. Barton talked with me on this week’s podcast episode about the stress of going to work and being one of the few Black workers in tech. He talked about co-workers joking, when they heard a police siren, ‘Oh LeRon, they’re coming to get you! Better run out the back door!’ He talked of being expected to perform at a higher standard than his white peers, of mistakes being less tolerated, of breaking rules he didn’t know about, or having the rules change midstream.

It wore him down.

“You’re taught that you have to develop thick skin. There’s a term that I really detest, that you have to have ‘grit’ to make it through these situations,” Barton told me. “But I’d like to ask, ‘how do we create an environment where you don’t have to endure?’

So he stopped “rolling with the punches.” He stopped “code switching.” And got labeled a troublemaker. As someone who couldn’t just take a joke.

It’s a phenomenon that sociologist Adia Harvey Wingfield has seen repeatedly in her research.

“I don’t know LeRon, but I feel like I do know him, because I’ve heard so many iterations of this,” Wingfield said. “I wrote a book in 2013 called No More Invisible Man. It was a look at Black men working in white male-dominated occupations specifically. I spoke with Black men who were in engineering, law, finance and medicine. And so many of those experiences of being isolated, of having to look the other way when racist things happened, or feeling the pressure to look the other way when racist things happen, of being told to toughen up. It’s routine. It’s so commonplace. It’s even harder for women because this is kind of a boys’ club. And so, it’s that much harder for women to try to navigate.”

Tech jobs are projected to be among the fastest growing, high-paying jobs in the coming decades. Yet recent reports show that, while Black workers make up about 12 percent of the total US workforce, they make up only about 8 percent of the tech workforce, a number that hasn’t budged in decades. Black women account for just 1.7 percent of the tech workforce, a report from AnitaB.org found. A recent Russell Reynolds Associates report  found that, like Barton, Black workers in tech are held to higher standards, are subjected to biased performance evaluations, locked out of growth opportunities and that the “bar moves subjectively, no matter what.”

We also spoke on the podcast with Nahsis Davis, a nurse, union leader and single foster mother of three in Chicago. Nursing and care jobs are also among the fastest growing jobs of the future. Yet Black nurses make up only a tiny fraction of the still largely white and female workforce. And Davis, too, experiences frustrations and differential treatment because of her race, or of being expected to care for others while having no paid time off to care for herself if she’s sick.

“My boss is Caucasian. And every time I speak to her about certain aspects or certain things about nursing, it’s like, ‘Yeah, well, deal with it.’ If other people go to her and talk to her about it. It’s like, ‘Oh, well, let’s put a plan in place. Let’s talk about this,’” Davis said. “It’s like, ‘Oh. I thought I just said the same thing. But maybe I was speaking in a different language.’”

When I asked Davis about the toll that that environment took on her, Davis held her thumb and index finger a miniscule inch apart. “It definitely makes me feel this big,” she said. “But even more so, it really makes you kinda angry, and makes you really not want to even work with them or work around them or put your all into it.”

As we continue to explore the toll of work stress on the podcast, and ask, how do we design an equitable future of work and wellbeing, Barton’s and Davis’s experiences, and that of Black workers in every sector, are crucial not just to understand, but to transform. An uncivil workplace is no longer something we should tolerate, (not that it ever should have been.) And leaders, who set workplace tone, culture and policy, need incentives, concrete strategies like effective manager training, and to be held accountable for ensuring it does transform

We’re finding in every episode that the work cultures, policies and practices that are good for workers and their wellbeing and that promote equity, are actually good for business, the economy and a fair, democratic society, as well. As I was reporting for this episode, I came across a report done by the San Francisco Federal Reserve Bank. They found that if we could eliminate racial and gender inequalities so prevalent in so many work environments, we would create an extra $2.6 trillion in value every year. That’s 14 percent of GDP every year. That’s a stunning testament to the pervasiveness and the toll of structural racism and sexism.

Research has found Black Americans, regardless of their socio-economic status, experience greater early health deterioration than white Americans that only gets worse over time, and that may be the result of “persistent, high-effort coping with acute and chronic stressors.” African-American women, studies show, not only experience disproportionately higher rates of cardiovascular disease, obesity, lupus, maternal mortality, adverse birth outcomes and untreated or mistreated psychological conditions, but the highest “allostatic load” of stress  - the total burden of chronic stress and life events – of stress compared to African-American or white men and white women. And work — the lack of it and the lack of access to good work — has a lot to do with it. Just think how, through the COVID-19 pandemic, the work of many service-sector workers of color was lifted up as “essential” work. And yet the workers themselves continue to be treated as disposable.

Though the Civil Rights movement opened up more opportunity for Black people in America, decades later, Black workers are still overrepresented in what are considered low-wage, low-skill sectors of the economy: bad jobs with little power that already aren’t “big enough” to support a life. They’re underrepresented in stable, well-paying good jobs that offer autonomy, complexity, creativity and control. And as technology continues to rapidly remake work, research has found that workers of color are overrepresented in 15 of the 19 occupations at highest risk of disappearing because of automation. White workers are 50 percent more likely than workers of color to hold good “future proof” jobs.

This is a problem that Civil Rights leader Bayard Rustin, the architect of the March on Washington, foresaw decades ago. His solution required much more than the short-term job retraining or upskilling programs that are still proffered as the answer. In his 1965 essay, “Humanizing Life in the Megalopolis,” Rustin called for nothing short of a careful long-term plan to ensure racial equity for people of color at every rung of the ladder and a share of and stake in our shared technological future.

What are we waiting for?