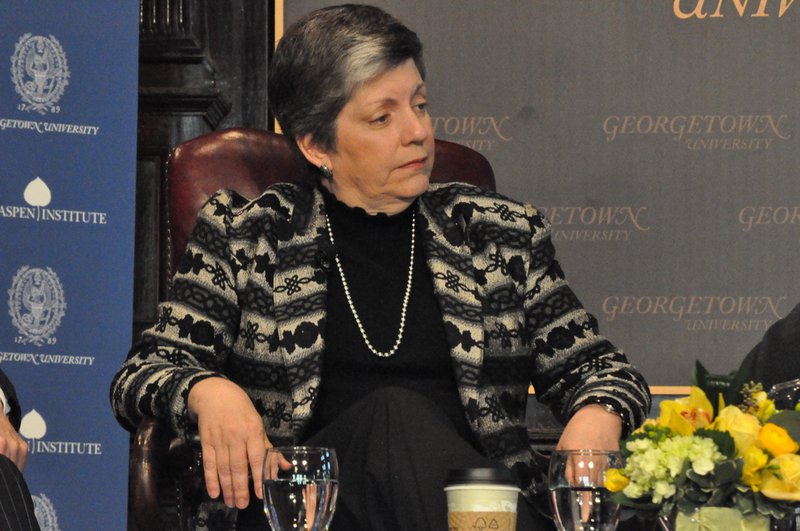 Flournoy likely wouldn’t have been alone: Clinton appeared poised to build on Obama’s inclusive history. She would be the commander-in-chief, and women were likely to get other senior national security posts, in part because Clinton had promised at least half of her cabinet slots would go to women. Indeed, Clinton was rumored to want to make history by having a woman run the Treasury Department, another job with key national security implications.

Never mind all that now. Many Republicans of both genders with strong credentials on national security issues avoided Donald Trump’s campaign. And the people he chose to advise him on national security issues were mostly white men. Now, Trump has rewarded those loyalists—such as NSA-designate Michael Flynn and likely Attorney General Jeff Sessions—with plum national security jobs, while also bringing in some heavyweights from outside the businessman’s inner circle who also are mostly white men, such as James Mattis, who Trump tapped to run the Defense Department.

All told, it is likely that the attorney general, CIA director, defense secretary, director of national intelligence, national security adviser, secretary of state and treasury secretary will all be men—as, of course, will the president himself.

There are three obvious problems with such an approach. If he ends up tapping men for nearly all the high-profile national security jobs, Trump is denying the deep bench of women from previous GOP administrations a chance, while implicitly suggesting the most-qualified candidates for some of the government’s important jobs are almost all men. He is ignoring studies that suggest that more inclusion of women leads to better decision-making. And he is reinforcing some existing stereotypes by appointing women to posts such as United Nations ambassador and education secretary, instead of defense secretary or national security adviser.

But in terms of getting closer to achieving gender parity in national security policy, the Obama years should not be minimized because Clinton was defeated, and all is not lost with the rise of Trump.

Obama’s tenure, particularly his second term, offers a roadmap for presidents of either party who want to appoint more women to key posts. He didn’t start out on this path. Early in his tenure, as the Washington Post’s Juliet Eilperin illustrated in a groundbreaking recent piece, men overwhelmingly ran the policy processes on domestic and national security issues, often ignoring the ideas of their female colleagues, and at times not even inviting them to key meetings.

But by the end of his eight years, Obama had not only appointed women to key jobs, as he did with Latinos, blacks, and people who are gay, but done so without creating much fanfare, controversy, or grumbling that this was affirmative action for people who were unqualified for the jobs that they were offered. He and his team found women who were obviously well-credentialed and then actively promoted them. Lynch was reappointed the U.S. Attorney for the Eastern District of New York in 2010 (she had held the same post in the Clinton administration), then was nominated to become attorney general four years later. Rice ascended from UN ambassador to national security adviser. Monaco had been a longtime DOJ prosecutor, was named the first-ever female assistant attorney general for national security in 2011, then took her White House post two years later. Obama of course was actively trying to help Hillary Clinton get a promotion as well.

Notably, Obama gave women roles in homeland security and counterterrorism that often go to men. He picked women for jobs that would be high-profile but have limited decision-making authority (Clinton had little ability to execute her own vision as secretary of state), but also jobs, like Monaco’s, with substantial behind-the-scenes power. He put women in jobs, like national security adviser, in which they would determine who attended a meeting and what its agenda would be.

Significantly, all this gender diversity wasn’t just about the top level jobs. Data focused specifically on national security jobs is hard to find, but a survey by the Washington Post of 80 confirmation-required jobs in the federal government found that 35 percent of these appointees were female under Obama, compared to 16 percent in George W. Bush’s administration and 23 percent in Clinton’s. That is still far from gender parity, but it suggests Obama made major strides.

That said, the women Obama appointed can still serve as important figures in national security policy, running bipartisan commissions, appearing on television, writing op-eds and advising their party’s politicians on Capitol Hill, in the same way that men like James Baker have long done. Commissions may not sound important, but Lee Hamilton may be better known for his work investigating how the U.S. could have prevented the September 11 attacks than his years as an Indiana congressman.

Looking ahead toward the Trump administration with this history in mind, it seems possible that women will play a bigger role in national security than was originally expected.

The president-elect has already chosen Nikki Haley as the UN ambassador and K.T. McFarland as his deputy national security adviser. Haley has been criticized for her lack of foreign policy credentials, but her appointment is a welcome sign in one respect: Trump picked someone for a key national security post who had sharply criticized him during the campaign. If the new president is willing to consider GOP national security professionals who either refused to endorse him or said he was unfit to be commander-in-chief, several highly-qualified women and men could still join the government. Some of these staffers, such as Meghan O’Sullivan, who was deputy national security adviser for Iraq and Afghanistan under Bush, may feel differently about serving in a Trump administration now that he has appointed a more traditional figure at the Pentagon, although Flynn is deeply controversial.

Also, Trump and his team, after quickly picking Sessions and Flynn for top jobs, are now reaching out to the broader GOP national security establishment, which includes many women who have held senior roles in past administrations. This outreach has included meetings with former National Security Adviser and Secretary of State Condi Rice and ex-White House Homeland Security Adviser Fran Townsend.

In the early days of the Trump administration, women won’t hold the high-profile jobs they were likely to under Clinton. But if they can at least acquire senior-level jobs in the administration, they could ascend to higher-ones later on, as they did during Obama’s eight years. Trump is known for changing his advisers regularly. In government, personal relationships with the candidate from the campaign are likely to diminish in importance compared to individuals’ performance and relationships in the actual administration.