Will the United States Turn Its Back on Myanmar’s Muslim Minority? 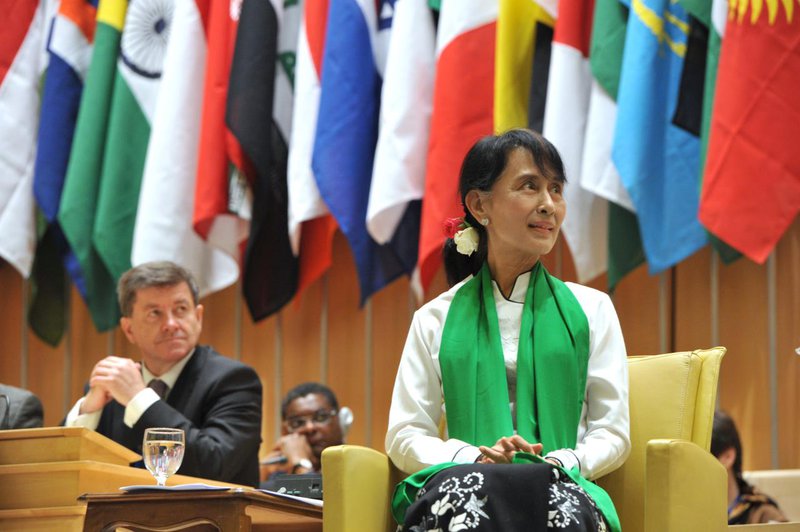 International actors this week have upped the ante of investigating potential crimes against humanity in Myanmar, also known as Burma. And they, in turn, have triggered questions about what role the United States might play in pursuing justice.

On Monday, Keith Harper, who served as the US ambassador to the Human Rights Council (HRC) in Barack Obama’s administration, called for the establishment of a “full inquiry” into abuses against the Rohingya, Myanmar’s heavily persecuted Muslim group. He also described the Nobel Peace Prize once awarded to the country’s de-facto leader, Aung San Suu Kyi, as “a most awful kind of shield from proper scrutiny.”

Harper’s criticism follows a February report from the United Nations that similarly heightened the push for an independent investigation into human rights abuses in Myanmar. The “flash report,” published by the UN’s Office of the High Commissioner for Human Rights (OHCHR) on Feb. 3, shone a light on abuses based on testimony from more than 200 Rohingya refugees. They belong to an estimated 69,000 who have fled to Bangladesh due to security forces’ “clearance operations” carried out in western Myanmar’s Rakhine State for nearly five months: a state response to coordinated attacks by militants on border police outposts in October of last year. The campaign reportedly left some 1,000 dead, according to two UN agencies, and has elicited allegations of atrocities ranging from rape to summary executions to the destruction of homes.

One international response that has been floated as a result of allegations is a UN Commission of Inquiry (CoI)—an investigative body typically established by the HRC. Recommendations for the formation of a CoI are put forward in the form of a resolution by an HRC member state, which then requires the affirmative votes of more than half of the other 46 members in order to proceed.

Matthew Smith, co-founder and chief executive officer of Southeast Asia-based human rights organization Fortify Rights, said that the European Union currently has a resolution to extend the mandate of the Special Rapporteur on Human Rights in Myanmar—a position held by Yanghee Lee—and that it “could include language…calling for the establishment of a CoI.”

Yanghee Lee presented her End of Mission Statement on Feb. 24, saying that in the report she will present to the HRC on March 13, she will highlight “how the Government of Myanmar appears to have taken, and continues to take, actions which discriminate against the Rohingya and make their lives even more difficult.”

She acknowledged the Muslim minority’s long and fraught history of “systematic and institutionalized discrimination” in Myanmar. The Rohingya—of whom there are an estimated 1.1 million—have largely been made stateless as the result of a 1982 law that defines citizenship along ethnic lines and excludes them from recognition as one of the country’s 135 “national races.” They also face severe restrictions on freedom of movement and access to education and healthcare.

In the past, Yanghee Lee has also confirmed that she will “certainly be pushing for an inquiry, definitely, on the Rohingya situation.” In response to the OHCHR report, the UN’s High Commissioner for Human Rights Zeid Ra’ad Al Hussein has also said that “the gravity and scale of these allegations begs the robust reaction of the international community.”

“If member states ignore the recommendations of the High Commissioner and the Special Rapporteur, it will be an ugly reflection of how the international community continues to abandon the Rohingya,” Matthew Smith said. The United States, he added, “should immediately state that it would support the establishment of an inquiry.”

When contacted by the New America Weekly, a state department spokesperson said that the US remains “concerned” by the findings of the Feb. 3 OHCHR report and that they “are in close consultation with the EU as they present a resolution on the human rights situation in Burma.”

US Ambassador to Myanmar Scot Marciel repeatedly stated in a recent interview the importance of a “serious, credible investigation” into allegations of human rights violations in Rakhine State.

“We are not in a position to verify or rebut specific allegations, but the number of allegations, the interviews, the reports, are very concerning,” Ambassador Marciel said when asked about the OHCHR flash report. Yet the United States, he clarified, is not carrying out any kind of investigation to “come up with an independent finding,” adding, “that’s not our role.”

Particularly damning to this narrative is the fact that Aung San Suu Kyi’s National League for Democracy government in Burma—elected and in power for nearly a year—has repeatedly denied claims of military atrocities committed against the Rohingya during the clearance campaign.

Myanmar’s President’s Office formed its own investigative commission—led by the country’s military-appointed vice president—to look into allegations of abuse in Rakhine State. After three visits to the region, including one after the release of the OHCHR report, it said it found no evidence of the crimes outlined by the UN agency’s research—despite a flurry of reports to the contrary. In the week following the release of the flash report, the police and military also announced the formation of their own commissions to investigate the findings of the OHCHR. Yet because of their lack of independence, all three commissions have been widely discredited by critics.

Many members of Congress hold Aung San Suu Kyi in particularly high regard, explained Myra Dahgaypaw, a policy adviser for the Washington-based US Campaign for Burma. She said that she has seen this perception discourage US politicians from taking political stances that question or challenge Suu Kyi’s leadership. In that regard, Fortify Rights’ Matthew Smith said, “Congress needs to assert itself,” and clarify its position on the reports of persecution in Myanmar.

Not to be lost in a discussion of a CoI, Dahgaypaw added, is a continued emphasis on the importance of the role of the Special Rapporteur for Human Rights in Myanmar.

“The world is watching Burma very closely, and they have continued to do what they have done. What if no one was watching—what would they do? That’s why it’s important to have a watchdog,” she said in reference to Yanghee Lee.

In a phone interview, one veteran Rohingya journalist, long exiled to Bangladesh, described the situation in northern Rakhine State as so dire that many are simply calling for “any” investigation which can be deemed “international and independent,” saying that the establishment of one specifically by the UN was not a requirement in his opinion.

“Now the situation is worse than before,” he explained, emphasizing the urgency for action. “Before, we never saw military operations. Now, we see them. For the Rohingya people in Myanmar, it’s like living in an open prison.”