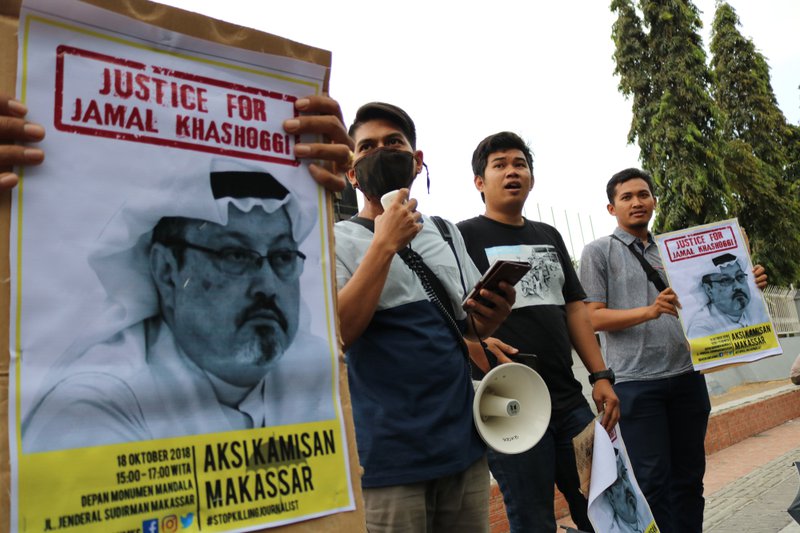 After weeks of increasingly absurd stories, Saudi Arabia has admitted that Jamal Khashoggi—an American permanent resident, Saudi citizen, and Washington Post columnist—was killed inside the Saudi consulate in Istanbul, Turkey, on October 2, and Saudi Arabia’s public prosecutor has even said that it was premeditated, though the country still denies any high-level involvement.

On the one hand, Khashoggi’s death comes as a shock: It’s brazen to do this to an American resident at Saudi Arabia’s own consulate—and within the borders of a country that’s a NATO ally of the United States, no less. And yet, perhaps this isn’t—or at least shouldn’t be—so jaw-dropping. After all, the United States has consistently chipped away at the norms that may have discouraged such actions in the region—not only since President Donald Trump entered the White House, but ever since embarking on the War on Terror in 2001.

In 2017, the Trump administration voiced support for the actions of Saudi Crown Prince Mohammed bin Salman, even as Saudi Arabia clashed with Qatar, kidnapped the Lebanese prime minister, and waged a disastrous war in Yemen. In September of this year, Secretary of State Mike Pompeo reportedly overruled the concerns of U.S. State Department specialists to certify that Saudi Arabia was sufficiently avoiding civilian casualties in its war in Yemen—a requirement for continued U.S. military assistance to the Saudi coalition. This has, in consequence, only telegraphed to Saudi Arabia approval of its foreign policy.

Likewise, until recently, the Trump administration had remained mostly vague in comment and action regarding Khashoggi’s death, with Trump sending Pompeo to meet with Saudi King Salman and floating—without evidence and, as has become clearer since, almost certainly incorrectly—the claim that the killing was carried out by rogue officials. It was only this week that Trump took a firmer stance, saying that the plot was “one of the worst in the history of cover-ups.”

But there are other reasons that Saudi Arabia might not have been all that concerned about allegedly targeting an American resident. More specifically, it’s important to remember that Trump is infamous for his anti-immigration—specifically anti-Muslim—views. In fact, when his administration’s travel ban was first implemented, in 2017, it included permanent residents. It was only after confusion and opposition that the administration clarified that the policy doesn’t apply to permanent residents. Following Khashoggi’s disappearance, Trump repeatedly made it a point to emphasize that Khashoggi wasn’t a U.S. citizen.

Meanwhile, U.S. relations with Turkey have weakened in a number of ways in the years leading up to Khashoggi’s death: the Obama administration’s decision to support Kurdish groups in Syria that Turkey considers a threat, U.S. concern in the aftermath of a failed coup attempt and the resulting crackdown, and a recent trade spat. In this light, Saudi Arabia’s actions against a NATO ally aren’t quite the affront that they may have been in the past.

Just as relevant, though under-addressed, is the fact that the death arguably reflects the acceptance of torture and targeted killing as a strategy that the United States itself brought to the Middle East and its periphery as part of the War on Terror. Last week, Saudi Arabia was preparing to claim that Khashoggi died as a result of a mistake during an interrogation—a questionable claim that, even if accepted, would suggest that rather than setting out to kill him, Saudi officials set out to harshly interrogate him, and he died as a result. When it finally acknowledged Khashoggi’s killing, Saudi Arabia framed it as a rendition gone wrong.

More than a decade before Khashoggi’s killing, the CIA took a similar approach, having aggressively pursued rendition operations and torture as part of its post-9/11 counterterrorism strategy. This resulted in detainee deaths, according to the U.S. Senate report on CIA torture. And even though by the end of 2008 the CIA reportedly ended its use of torture and detention of suspects, it wouldn’t be surprising if Saudi Arabia didn’t fear retaliation for comparable actions, considering that Trump has praised torture and appointed an individual deeply involved in the torture program to head the CIA, and that the United States under the Obama administration declassified only a redacted summary of the Senate report on torture, which suggests an unwillingness to enforce even the barest accountability for such acts.

And, when it comes to targeted killing, the United States has given an even clearer, though still unspoken, green-light via its actions conducting drone strikes in multiple countries—including in countries where the United States doesn’t consider itself actively engaged in military hostilities, let alone war. The expanded willingness of states to engage in this kind of activity could be seen even prior to Khashoggi’s death, in the proliferation of armed drones and their use.

This isn’t to suggest that the final responsibility for Khashoggi’s killing rests with anyone other than with the Saudi officials who appear to have authorized and carried out the assassination. Rather, it’s to underscore how the Trump administration—and the United States more broadly—has, over the years, weakened several important norms and signals that may have discouraged such violent actions. That fact should stand as a warning: that threats to stability in the Middle East can come from American policy itself—not just from rival nations.